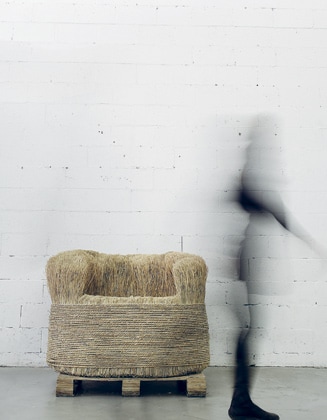 In pursuit of imperfection, the uniqueness of nature, inside industrial production processes.

Raw design, or the tendency to design rugged objects with rough materials, is more than just a fashion: it is a search for the essence and the poetics underlying everyday things. In some cases, raw design reinterprets manufacturing traditions, reviving obsolete materials. It reconciles itself with nature by referencing the archetypal forms of a distant rural past. Raw design is also a form of sustainable thinking that starts with the study of the materials of a place, to offer an alternative way of making things: by hand, with a short supply chain, reduced costs and fewer phases. These ‘raw’ objects have no disguises, and the textures of their natural surfaces are themselves an expression of the beauty and uniqueness of the artifact. Unusual but traditional, we find materials like prickly pear cactus, luffa, straw and rice, or Capim Dourado, a fiber that grows in the Mina Gerais region of Brazil. Starting with the material lets designers focus on typical aspects of a culture that tend to get flattened out by globalization. This is the case of the Sicilian designer Vito Tripolone, who together with the industrialist Vittorio Di Blasi has created lamps using prickly pear cactus as a material. The inspiration came from the 19th-century items found at Adrano (Catania) that made use of the plant, bringing out its characteristic ribbing. The project takes on character at the place, then, and takes us back to distant memories. Just consider “Made of Chair”, a seat made entire in rice straw, by the Korean studio beeeen & company. The seat is stabilized by the rope around the base, while the back is flexible thanks to the elasticity of the straw, which also offers an unexpected sound when you sit down. An experience that involves multiple senses and unveils the poetic nature of the material. The Mexican designer Fernando Laposse operates in the same manner, a kind of crafts contaminated by design, exploring the borderline between folk and contemporary. His luffa objects, from a cucumber- like plant usually used to make vegetable sponges, play with the perforated, translucent textures of screens and lampshades, and with the lightness of the material in cushions or visible fillers. Luffa, if bonded with cement or wood and other materials, takes on different properties, also for insulation. It grows abundantly in tropical climes, attaching itself vertically to trees. It is possible to produce up to 8000 pieces of fruit per hectare every six months, consuming few resources. So luffa is an excellent substitute for cork, and in many tropical countries it can become an economic resources, if its applications are also extended to the domestic sphere. From earth to artifacts, creating prosperity for local communities. This is the goal of Coleção Jalapa, a series of objects made with Capim Dourado, promoted by Marcelo Rosenbaum. The Brazilian designer has involved the women of Laboratório Piracema in a workshop to develop alternative uses of the fiber. Applying basic skills and taking advantage of abundant but also characteristic territorial resources, a poor community has become self-sufficient. Whether in underdeveloped conditions or wealthy nations, making design also means activating positive processes and hypothesizing new economics. From agricultural refuse usually used for biomass, Gionata Gatto makes a raw material for moulded lamps. The compound is made with natural binders like latex, Dammar rubber and Gamboge, and has a life cycle of 8-10 years, after which it is biodegradable and can be made into compost. Since this is a seasonal material, left raw, the color of the artifacts reflects the hues of the constant changes in nature. The raw design approach attempts to create awareness about the sustainability of objects. Starting with designers. Martinho Pita has learned about the pruning of Portuguese oak to develop the Bicho series of lamps. The correct technique permits efficient regrowth of the plant, and contributes to the form of the objects. The series is composed of monolithic ‘creatures’ that seem to move when you shift your viewpoint, each of them different and unique. German designer Johannes Hemann has also analyzed the composition of wood and designed a fabrication technique, revising the traditional methods of steam-curved wood. Fresh branches are cut according to their fibers and positioned inside U-shaped moulds, then dried without any other treatment. In this way, they conserve the image of raw wood, in contrast with tops in glass, or the leather of seating. Almost like freezeframes of the transformation from natural to artificial, the lights of the Dutch designer Floris Wubben start with the trunk of a tree, opened into three sections to shape the base and stripped of bark to form the shade. From the branch to the lamp, in a seamless process. The types of wood are those seldom used, for aesthetic reasons, but they are full of excellent possibilities for transformation. Raw design brings a cultural heritage back into the limelight, that of humble materials that are no longer in use, or of archetypal objects that take us back to distant rituals, in contact with nature. These themes can be seen in the projects of the Scandinavian group Edition in Crafts, which has investigated the aesthetic and expressive potential of straw, and in the garden baskets by the English designer Daniel Dopping, kicking off the Gather brand that focuses – not out of nostalgia, but in pursuit of good design – on the traditions of rural England. A combination of nature and technology without distortion, recouping the value of different identities.