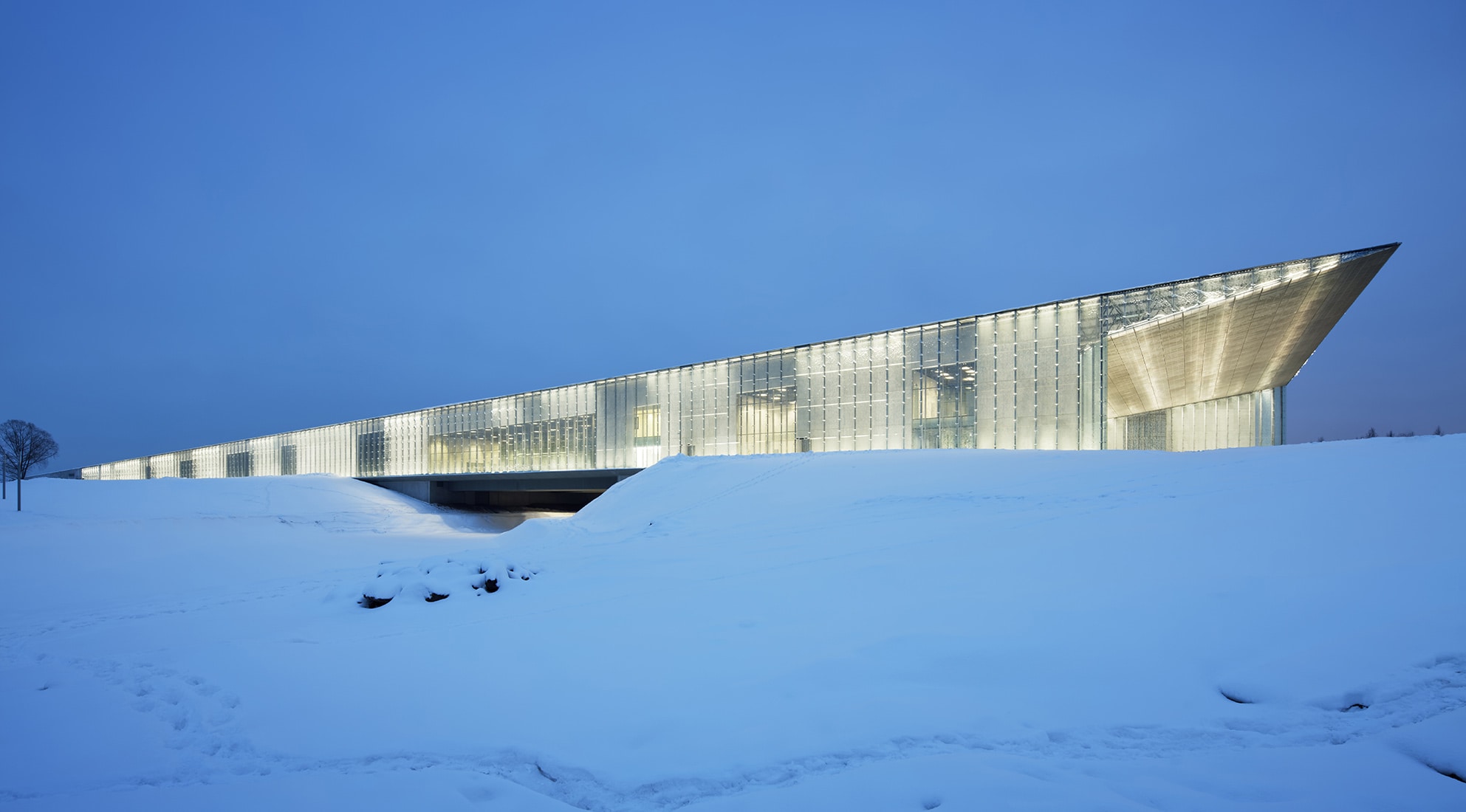 The architect is “a bricklayer who has learned Latin,” Adolf Loos said. The concrete promenade stretching towards the horizon, a symbolic representation of Estonia’s takeoff and openness to the world, corresponding to the aerial image of the Estonian National Museum of Tartu designed by Dan Dorell (Italian), Lina Ghotmeh (Lebanese) and Tsuyoshi Tane (Japanese), on a former Soviet air base, immediately tells us that in this case the ‘bricklayer’ is multilingual indeed.

Trained under the likes of Jean Nouvel, David Adjaye, Norman Foster and Renzo Piano, these young architects who have worked together in Paris for ten years, ever since they founded the DGT Architects in 2006, have made a philosophy based on principles of multiculturalism, experimentation and ecology their linguistic signature.

Thanks to which, having brilliantly passed some tests – two will suffice: the worldwide display facilities of Renault and the competition won for “Reinventer.Paris” (the innovative reinterpretation of the Gare Masséna site, transformed into an area of agricultural production and organic conversion) – they have been able to try their hand at designing this new museum in Estonia, slated to open to the public before the start of October (29 September, to be precise).

“It is a building with low energy consumption, to reduce operating costs, as requested by the client, the Ministry of Culture of Estonia,” says Dorell. “The museum bears witness to the culture of a country closed between Russia, Latvia and the Baltic Sea, a place that is now in the avant-garde on a technological level, but has been involved in complex historical developments that led to the recognition of its rights only after the collapse of the Soviet Union. (Independent since 1991, Estonia became part of the European Union in 2004, ed.). The museum will also function as a center for research and creation of a national identity projected into the future.”

Quite a challenge, given the fact that the museum is located on a former Soviet air base camouflaged in a landscape covered with snow for many months each year, with temperatures ranging from -20 to +30°C. The designers have approached the situation with a good dose of realism.

“First of all, we thought about a building with low environmental impact, in dialogue with the context, which was seen as a resource to be utilized and enhanced,” Dorell continues.

“The operation took ten years: there were a pool of lake water, the ruins of a mansion that was the home of the first Estonian museum, an old vodka distillery, and traces of runways on the terrain, extending for 1.5 kilometers. All to recover, reclaim, reorganize in dynamic relation to the area set aside for the compact volume of the new museum.

The latter has facades in triple layered glass with a screen-printed outer skin that wraps it like a shell, offering glimpses, in a game of visual transparencies and veils, of the internal spatial landscape: the exhibition spaces, the library, the cinema-auditorium, the study halls, the archives, offices and storerooms, the restaurant and cafe zone. A total area of 34,000 square meters.”

The element that guides the entire visitor experience is the roof line of the building, slightly inclined, overhanging the main entrance: 360 meters of extension with a thickness of over one meter, conceived as the ideal continuation of the former runway, transformed into an outdoor exhibition space for large-scale installations, concerts, dance or traditional Estonian choir performances.

In the design, this roof line gradually decreases in height from 12 meters at the entrance space to 3 meters at the opposite end, where it meets a second entrance directly communicating with the runway-promenade.

“The first corresponds to the daily use of the building and its encounter with the exhibition spaces, the library, the shops,” Dorell explains, “while the second is used in the evening, organizing the route from the runway to the indoor restaurants, and the hall for concerts and theater performances. Other entrances, for the researchers and staff, for trucks and technical equipment, are placed at the sides.

One is also at a lower level to permit connection to the accessorized areas around the revitalized lake, to be used for boating in the summer and ice skating in the winter. The auditorium is also below ground level and establishes continuous visual contact with the lake and the nature of the place, thanks to the glass facades.

Those facing north have been studied to avoid direct light on the exhibits; those to the south, on the other hand, for the offices and research center, are designed to ‘harness’ the largest possible quantity of natural light. As a percentage, in any case, we have tried to reduce the glass portions and extend the roof, measures that together with the overall insulation of the volume reflect the need to limit energy consumption.

The same intent lies behind the radical choice of placing the 10,000 square meters of the national archives below ground, which contain about 140,000 objects: here the space truly works on passive energy, thanks to the use of special materials for the walls, from Denmark, that absorb humidity and release it when required, keeping temperature variation below one degree over the course of the day.”

The technical lighting has been done with products by iGuzzini, while the use of local materials roots the architecture in the place, reflecting its original colors. Polished concrete has been used for the floors (with oak in the library only), pale gray plaster for the walls, stainless steel for the grille-panels of the suspended ceilings.

The custom furnishings in all the spaces, from the offices to the exhibit areas, have been made by Estonian manufacturers (with the exception of the permanent exhibition rooms, assigned to local partners).