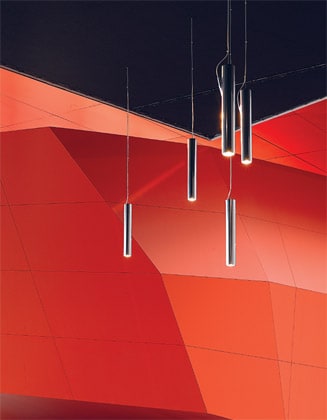 Four levels, three flexible exhibition spaces of about 1000 m2 each, just three years for construction: the new Frac (Fond Régional d’Art Contemporaine) of Brittany represents a cultural policy that works, a model of decentralization rooted in local realities, identities that reflect traditions but also look to the contemporary dimension.

“Frac of the new generation” was the title of an exhibition last year in Lille, to present the four most interesting centers then under construction: the one in Brittany, now the first to be completed, and others scheduled to open in 2013: the futuristic Frac of Orléans by Jakob + MacFarlane, the completely transparent Frac of Dunkerque by Lacaton & Vassal, and the Provence-Alpes-Côte d’Azur facility by the Japanese architect Kengo Kuma, part of the dynamic EuroMediterranee district of Marseille, together with new buildings by Zaha Hadid, Frank Gehry, Rudy Ricciotti and Stefano Boeri. The encounter between the innovative contemporary spirit of the Frac project and Odile Decq could only lead to positive results; Decq has always stood out for her avant-garde approach, the capacity to take the most provocative, adventurous ideas and develop them in an impeccable way. Starting with her first success, done with Benoît Cornette (victim of an auto accident in 1998), precisely here in Rennes, the headquarters of the Banque Populaire d’Armorique, with a splendid high-tech facade made in collaboration with Peter Rice (undoubtedly the greatest structural engineer of the second half of the 20th century), all the way to the present, with two projects opened in 2011 that cope with the constraints imposed by outstanding historical contexts: the restaurant of the Opéra Garnier in Paris, and the MACRO, the new Museum of Contemporary Art of Rome. The interiors of the building in Rennes have affinities with the spaces in Rome; developed simultaneously, for the same functions, the two projects demonstrate the same ability to break up and dilate spaces beyond the perspective cube, visually connecting different levels and zones, stimulating attention with a series of surprising views and contrasts between black reticular structures and red volumes, in a rather ferocious yet by now almost familiar kind of high-tech theater. This time the surprise – as opposed to the introspective arrangement of the MACRO – comes outside, where Decq has imagined a monolithic volume pierced by large openings, frayed towards the ground and towards the sky. The monolith evolves to become a spectacular, baroque device, staging an icon based on suspended gravity, in which the light accent of the soaring roof forms a contrast with the severe concrete forest facing the main front of the building.