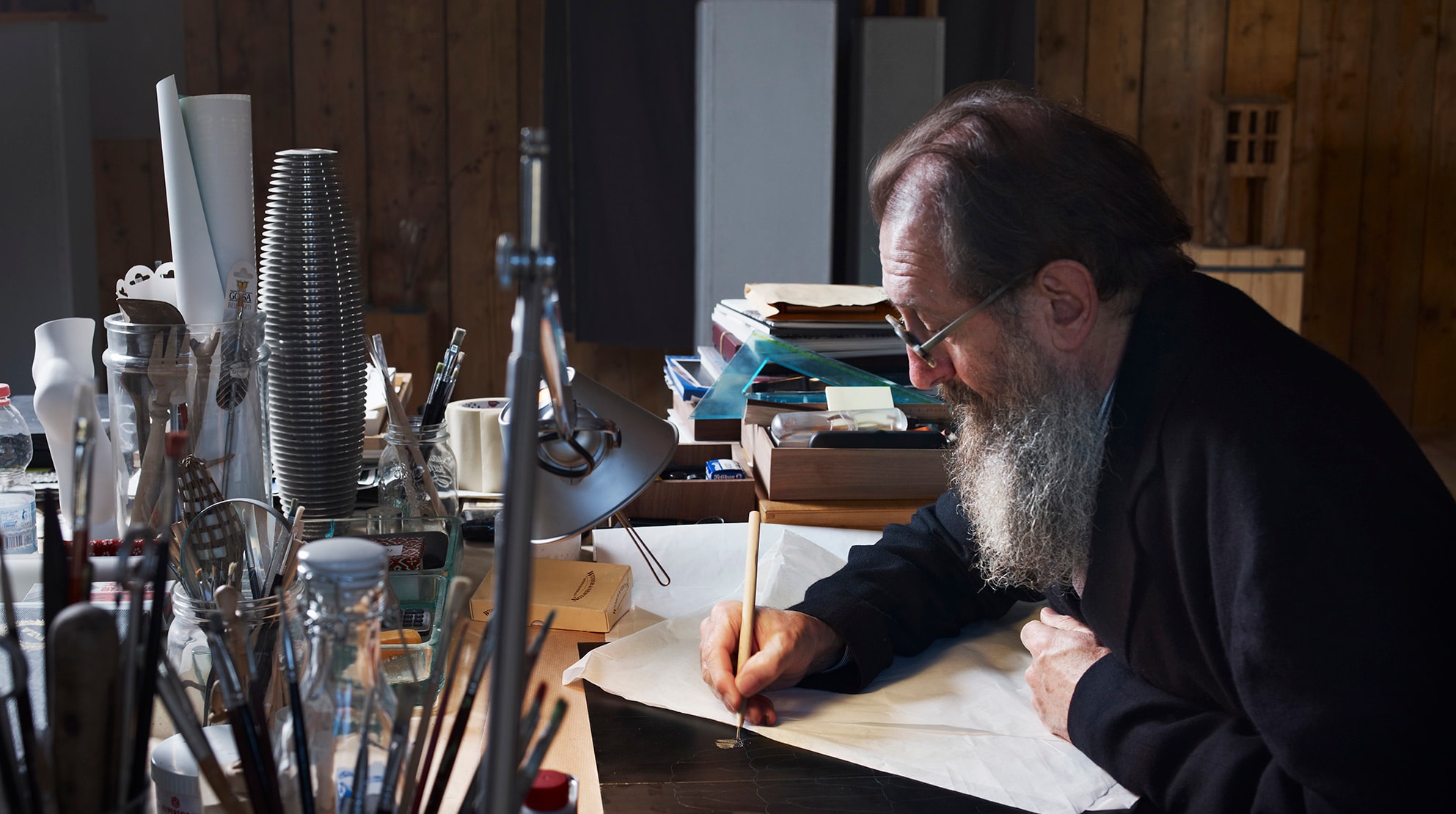 “On the way to San Bernardino, during a blizzard, at a certain point there was no visibility at all. That was when Sibylle and I decided to create Produzione Privata.” Michele De Lucchi tells the story, in his book I miei orribili e meravigliosi clienti (Quodlibet Habitat, 2015), of the spark behind an adventure that began 25 years ago, from a conversation with his wife and from an intimate, personal need to continue along the path of experimentation that had been interrupted after the end of Memphis, “the movement that moved forward with the philosophy of creating projects that stem from the needs of man, not of industry.”

From what was supposed to be a workshop in which to design and make objects with total expressive freedom, away from clients and closely linked to handicrafts, a true production company was born, which thanks to collaboration with about twenty crafts workshops in different regions of Italy, from 1990 to the present has made 17,000 products: lamps, vases, chairs and ‘unexpected things.’ At the start they were the things Michele designed for his own home. Then they became a variegated family of products, some of which are true bestsellers, like the Acquatinta lamp series, which accounts on its own for two thirds of the pieces made to date.

For the anniversary of Produzione Privata, celebrated in April with an exhibition of drawings at the studio on Via Varese in Milan, the designer from Ferrara retraces, together with his wife Sibylle, the meaning of this important personal endeavor. Which is at a turning point today.

TO CULTIVATE EXPERIMENTATION, TO NURTURE CRAFTS”: THIS IS THE MOTTO WITH WHICH PRODUZIONE PRIVATA BEGAN. COULD YOU TELL US ABOUT THE THINKING UPSTREAM FROM THIS OPERATION THAT BEGAN THREE YEARS AFTER THE CLOSING OF MEMPHIS?

Michele De Lucchi: The Memphis experience had engaged me in a very active, not only intellectual way, since I worked directly to find craftsmen capable of producing our designs. I went all over Italy to find small producers of glass, ceramics or marble, who still work directly with the materials and conserve age-old skills.

I felt the need to stay in touch with this dimension, after Memphis had come to an end. I think craftsmanship has always been treated with thinly veiled scorn in Italy, maybe because people associate it with something that has still not achieved the status of industrial production. Traveling, you can notice that in other countries crafts are highly valued.

In Japan, for example, craftsmanship is the activity with which man transfers his personality to objects. In France, made by hand is synonymous with luxury, a concept taken forward with great success. Just look at brands like Baccarat or Hermès. In Italy, crafts should be promoted and exploited as a tool, to experiment and to intercept the essence of the contemporary, the meaning of our evolving times.

Sibylle De Lucchi: Produzione Privata also comes from another intention, i.e. that of creating objects with a ‘familiar dimension,’ capable of expressing domestic warmth and personality. In 1990 our family had just been formed and we were looking for objects that would respond to our personal needs, not only in terms of function, but also in terms of signs and expression. What we found on the market wasn’t appealing… Candlesticks, chairs, beds, tables, a cradle… Many of the products came from our desire to surround ourselves with objects in tune with us.

A PERSONAL RESEARCH PROJECT THAT GRADUALLY BECAME AN ENTREPRENEURIAL EFFORT. HOW DID THAT PASSAGE HAPPEN?

MDL: Produzione Privata began thanks to its name, which is a bit ambiguous and has an inner contradiction. It aptly explains that this is a very special, small, private company, but nevertheless a business that reproduces, on a miniature scale, everything that happens in big industry. We began to produce objects for our family, then we made things for friends as well. When the requests spread beyond that circle, we had to approach issues of production, distribution, sales, marketing, communication, just like a real business.

SDL: The Produzione Privata catalogue of objects has evolved around the workshops, the themes of experimentation: ceramics and porcelain, metal, marble, glass, wood, minimum machines, ready-mades. Michele’s design thinking has gone into this, as well as the know-how and skills of master craftsmen of great value, many of whom are no longer working, unfortunately.

IN RECENT YEARS THERE HAS BEEN A LOT OF TALK ABOUT CRAFTS AS A WAY OF BOOSTING THE ITALIAN ECONOMY, STARTING WITH ITS DEEP CULTURAL ROOTS. WHAT DO YOU THINK?

MDL: I think it doesn’t make sense to make a distinction between industry and crafts: they live in the same market and with the same timely themes. Craftsmanship is part of industry and vice versa. The only real difference is that the craftsman gives the product a value developed by man and a particular sensibility, capable of capturing the historical moment in which the thing is invented and made. This is the factor that interests me most.

TAKING STOCK OF THE FIRST 25 YEARS OF PRODUZIONE PRIVATA, WHAT PROJECTS HAVE YOU DEVELOPED FOR THE NEAR FUTURE?

MDL: To date, the Produzione Privata catalogue has contained a series of permanent items as well as limited-edition collections. My intention for the near future is to focus on the latter: once a series of lamps has been sold, it is time to think about the next one, designed in a different way, in keeping with the needs and spirit of the specific moment, with a program that is constantly updated over time. The idea is to give design the responsibility of expressing the time in which it is conceived.

SDL: Michele’s work always has a strong narrative component: his projects come from a story and the need to share that story with others. This need is becoming stronger, while at the same time the idea is reinforced of disconnecting these stories from a fixed catalogue. Clearly that is a big challenge, also for the craftsmen who take part in the project: the small series of Produzione Privata gave them the security of numbers; the limited editions require more flexibility, but also offer the chance to update the research and the production with greater continuity.

MDL: With Produzione Privata I want to give myself the possibility of following my intuitions and expressing my thoughts. The idea is to grant value, prestige and a future to the world of crafts today. An artisan who evolves and with traditional techniques and some technological help manages to offer stimuli and human qualities industry no longer knows how to create.