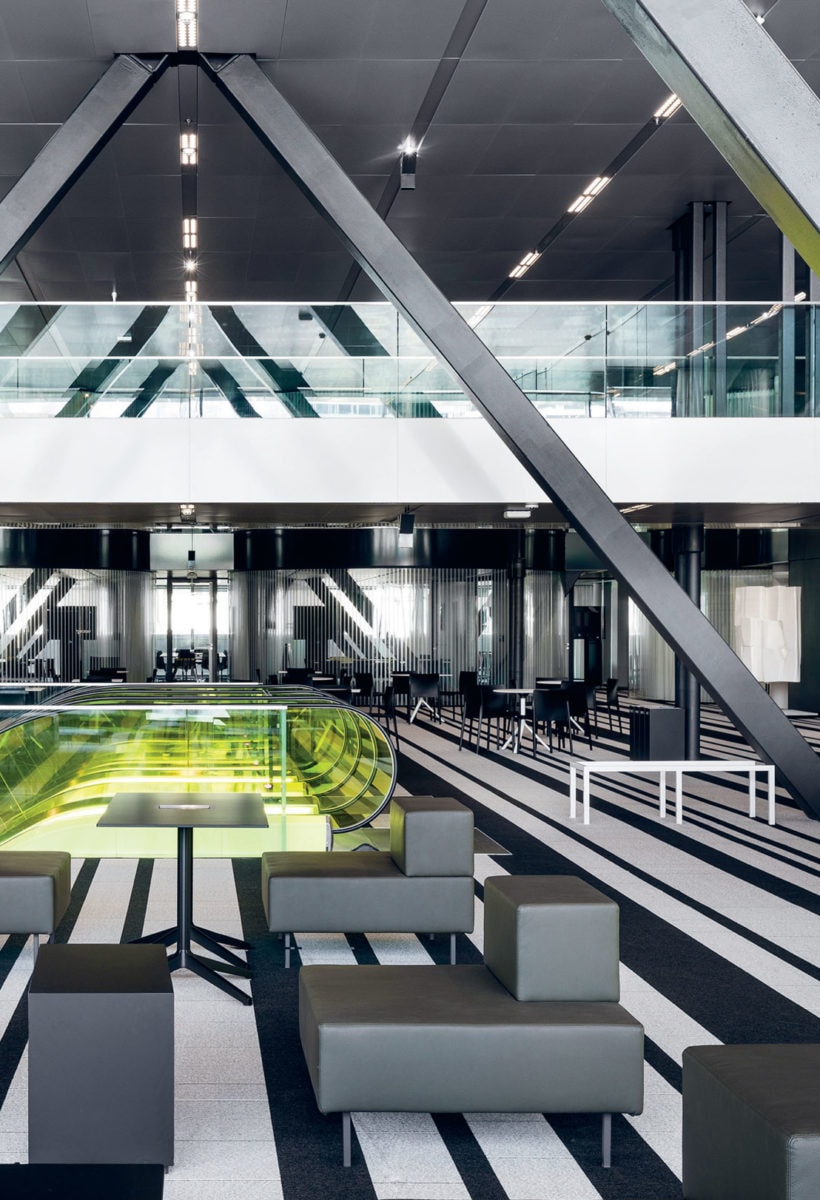 The second life of the former VROM Building in The Hague, Netherlands. The regeneration project helmed by Ellen van Loon, partner of OMA, reflects a new approach to government facilities, based on a way of working that prioritizes transparency and sustainability

OMA has invited Interni for an exclusive press tour. The Rotterdam-based studio, which needs no introduction, under the guidance of Ellen van Loon (partner at OMA since 2002) accompanied us to discover the Foreign Affairs Ministry of the Kingdom of the Netherlands at The Hague. After emerging from The Hague Central Station and crossing the street, Rijnstraat 8 – the address of the government facility – is an immediately striking presence.

“The former VROM Building has been transformed to contain different types of offices connected with the activities of different ministries brought together in a single facility, in a perspective of reduction of the governmental real estate portfolio,” says Ellen van Loon.

The existing structure was already innovative as an office building typology: a system of large lobbies with offices contained in the wings. But for its second life it was necessary to emphasize the idea of a continuum between exteriors and interiors. Furthermore, over the last twenty years environmental sensibility has greatly increased. In the past we didn’t talk about ‘green houses,’ especially not in relation to places of work.

In terms of sustainability and recycling, from the 20% of the demolished volume of 99.7% of the material has been reutilized in the new block that generates energy through the use of refuse transformed into biogas, and solar panels installed on the roof.

Bringing more light into the interior spaces and inserting the city in the spatial composition are goals achieved by replacing the original cladding with transparent triple-glazed facades. Energy consumption has been optimized by using all the lobbies of the complex as a reservoir of accumulation of warm/cool air, and by using LED lighting everywhere in the facility.

The concept has been developed in relation to different utilization from season to season, for better control of internal temperature. We have pursued reduced environmental impact also in visual terms, because the building marks the entrance to the city and its center.

“The new structural elements also made it feasible to ‘invert’ one of the existing lobbies, obtaining more space for the offices. Several new levels are now suspended from above, while others are supported from below. Metal staircases were then added inside all the lobbies to create more open connections among the various levels,” Van Loon explains.

“The idea was to develop a layout that would not be repetitive, with different types of workspaces, offering the employees of all the ministries spaces suitable for their specific needs,” Van Loon continues. “The thing I like best about my profession is precisely the possibility of knocking down barriers and getting beyond conventional solutions, in order to change the behavior of people through design. This is easier in Holland between it is a very democratic country, like the people themselves”.

With its transparency, oriented towards the natural light arriving from outside, this building of governmental power demonstrates that it is possible to make things less rigid, to encourage a dimension of teamwork and empathy. A new way of working.

Read the full article on the number of Interni March on newsstands.

The sum of the transformations in a study model
Longitudinal sections of the building, before and after the project: shown in red, the levels set aside for semi-public space. Note the enlargement of the pedestrian path that cut through the base of the building
Before the renovation
After the renovation
The orientation of the new spine of the internal circulation routes meets the ideal layout of workspaces open and closed in informal clusters
The visual continuum of the open spatial construction around the central void of the lobby
The new complex inserted in the urban context of The Hague
The transparency of the glass facade emphasizes the idea of an indoor-outdoor continuum
View of the new Rijksplein, the plaza that acts as a pedestrian passage and an entranceway for the lobbies.
The round space of De Grote Zaal
The angular design of the monolithic metal staircases, from each lobby of the complex, augments to open vertical connections between levels conceived to host flexible, versatile workspaces
#Design #Projects #architecture #sustainability