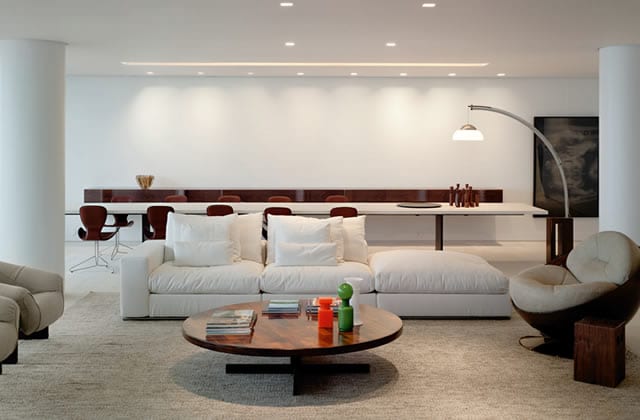 In Rio de Janeiro, a penthouse facing the Ipanema beach, a transformation that makes use of a large unified space, projected toward the horizon of the sea.

Ipanema is a barrio in the southern part of the city, but it is also the name of one of the world’s most famous beaches.

Its image is linked to the long sandy shore stretching along the city of Rio, but also to the famous song “Garota de Ipanema” the poet Vinicius de Moraes and the composer Antonio Carlos Jobim wrote in the early 1960s. Ipanema is a reference point of the Brazilian imaginary, and taking a look at this famous beach from your own house is a special privilege indeed. The redesign project of this big penthouse with an area of about 650 m2 is the work of Arthur Casas, done with the aim of exploiting the spectacular view and the great length of the continuous glazing (25 meters). The existing glazing corresponds to a large unified space, freed of its dividers now, which becomes the heart of the house, containing the entire daytime area with a kitchen connected by a fullheight door that opens completely. Five strong cylindrical columns transform the structural pillars into essential sculptural features, while beside the unified space, and still with a view of the beach, the master bedroom with its own bath is almost like a complete, independent cell in the new overall layout. The penthouse is split into two separate zones, with the entrance, stairwell and elevator at the center. To the right, the living area faces the view of the beach and the sea, while to the left the nighttime area has three bedrooms with baths, a service space and a home theater zone. The large open living area is paced by the rhythm of the columns that form a sort of internal enclosure, together with the pillar that supports a custom suspended fireplace. A ‘room inside a room’, containing custom furnishings and Brazilian modern vintage pieces. In the back, facing the kitchen, as a functional conclusion, the long dining table specially designed for this space is joined by a wooden cabinet hung from the wall, in tune with the linear character of the overall image. Clear lines and flat surfaces are also emphasized by the thick suspended wooden element that functions as a counter or a seat, running along the base of the big window. The materic and chromatic range of light hues, like the white of the walls and ceilings and the Jerusalem Limestone of the floors in the living area, reprised for the top of the dining table, contribute to create a luminous, sunny space