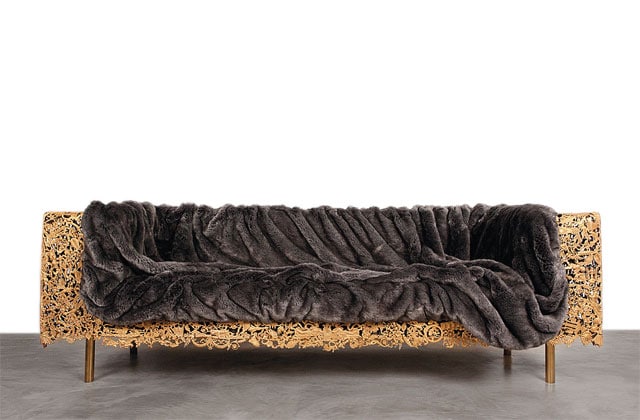 Arriving from far away, coming into contact with the crafts of the capital, they have produced a creative hybrid.

The Barroco Rococò project, shown at the Musée des Arts Décoratifs of Paris (13 September 2012/24 February 2013) in a small space on the fifth floor, a sort of ideal wunderkammer, is a ‘rinsanguamento’: the Baroque, a decadent style, becomes a ‘resurgent’ trend, a faded flower regenerated as a sprout. Barroco Rococò represents a new type of Baroque, or the contamination of two exaggerations, that of 17th-century Rome and the contemporary verve of Brazil. The brothers say they felt like Rome was already a familiar place, a memory of a past life. The encounter with craftsmen who work with marble on the Via Aurelia and with bronze on the Via Giulia was an epiphany. Humberto says that working in the city was a spiritual experience, a shaping of visions already in his head, nurtured by the soapstone sculptures of Aleijadinho (1730-1814) in the cathedral of Ouro Preto; a return to sculpture, the art he practiced before starting to be a designer. For Fernando, who has designed all the pieces, one by one, it was a translation of joy and melancholy into forms. Their pieces share the dissonance and excess of classic Baroque, but without the painful sense of a glorious era coming to a close. Instead, they represent a renaissance full of hope, with the smiling charm of certainty that discoveries and enchantment are still possible. Barroco Rococò opens up a new creative period: the decoration is not ornate, not superficial, but the essence of the project. The encounter between the Campana brothers and Galleria O., a story that began recently but is now already in its second chapter (the first was Brazilian Baroque, presented in the Baroque spaces of the Brazilian embassy in Rome in June 2011), has produced pieces that are not only special in terms of invention and making, but also set off a fertile relationship between designers, artists and artisans. It demonstrates that know-how needs constructive dialogue with creativity, outside the bonds of technique. That fantasy can become surprising reality, if it is prepared to come to grips with the limitations of making. Fernando & Humberto Campana, working shoulder to shoulder with Roman craftsmen, with generosity and commitment, have produced contemporary results that distill the vivid memories of Baroque virtuosity. The pieces shown at the Musée des Arts Décoratifs of Paris tell us that to produce masterpieces, with the aura of classics, amazing ideas do not suffice: there is also the painstaking, patient skill of the hands, as shown in the photo of Humberto at work with an artisan of Via Giulia.