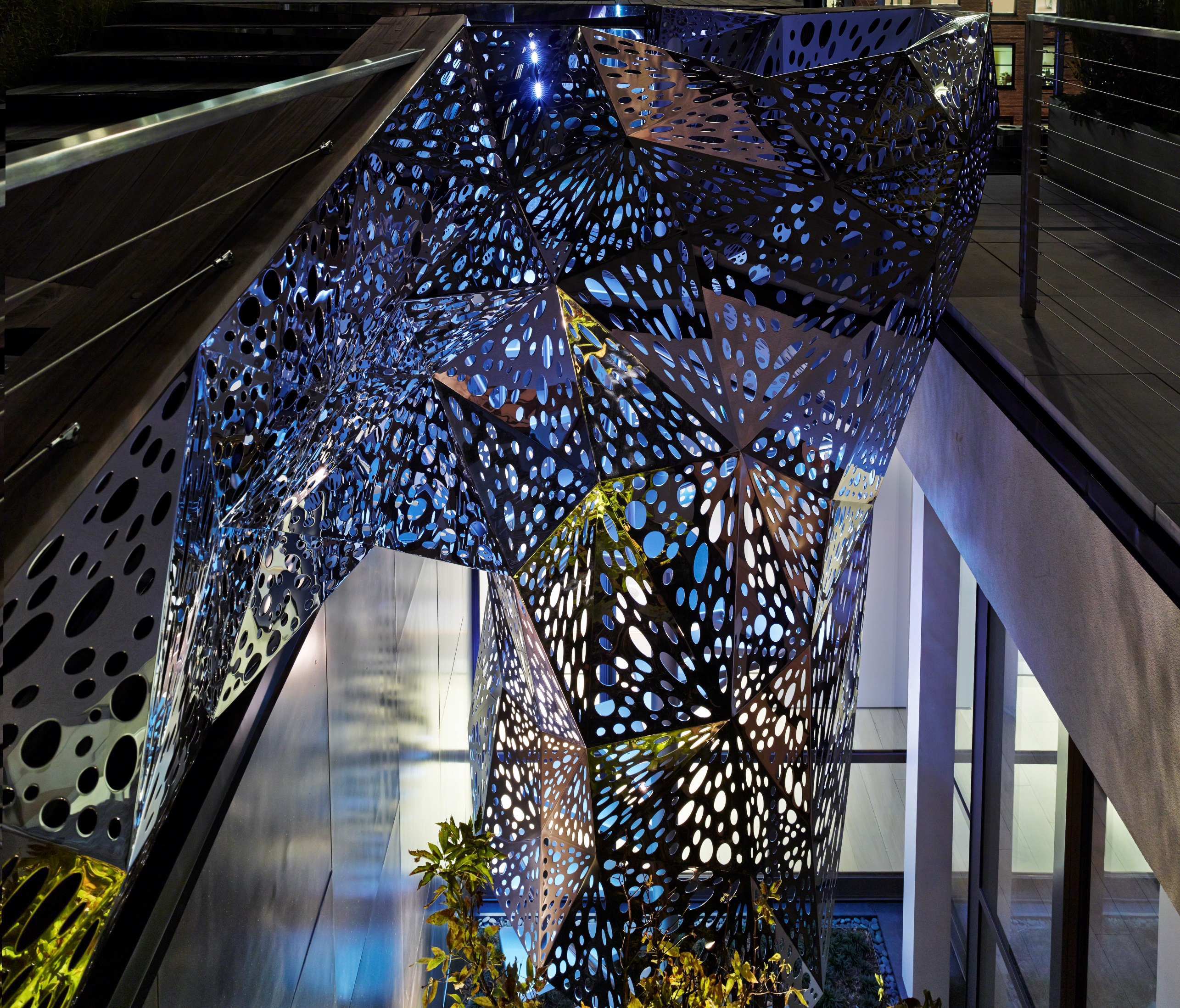 The overall renovation of a space on the upper level of a building in the TriBeCa zone of Lower Manhattan, winner of the “Best of the Year 2013” award organized by the magazine Interior Design, has led Steve Blatz and Antonio Pio Saracino to the total reorganization of the interiors in terms of layout and physical plant, enclosed in two volumes clad with sheets of zinc, also containing the service spaces.

Having thus identified and enclosed the operative zones (pantry, staircase, storage, laundry, bicycle storage), the rest of the house takes advantage of the idea of openness towards the outdoors, offering living spaces with large terraces that surround the living area divided from the entrance, and above all a roof garden created with the landscape architects HMWhite.

The interior is organized on staggered levels with an initial zone to the left of the entrance that hosts a cozy living area facing its own terrace, an outdoor space that continues, reaching the kitchen and offering an outdoor dining area. From the same level of this initial living zone a straight circulation corridor leads to a studio, two bedrooms with baths, and the master bedroom zone at the back, introduced by a large bathroom with a small Zen-like garden.

The main bedroom, with a fireplace inside, has a large window facing a terrace garden conceived as a complementary and ‘secret’ space. The ample living-dining area with an island kitchen opens to the right of the entrance, taking advantage of the openings in the facade with windows. In this large living area with multiple functions, a central position is occupied by a cavedium with plants that captures zenithal light and contains the main spiral staircase leading to the terrace garden above.

The spiral staircase offers a chance to experiment with a sculptural figure, the fractal cocoon of the polished stainless steel facing, produced by Marzorati Ronchetti of Cantù, which becomes an effective architectural folie, in the sense of that term in the 19th-century tradition of the romantic garden.

The light reflecting volume that emerges at the central level, reflecting the various shadings of daylight and forming mutable, evocative shadows in the interiors, reveals its complex geometry, becoming the connection between the house and the garden.

The unusual, enveloping steel skin of the staircase has been designed by means of a mathematical algorithm, generating the elliptical and circular openings on the triangles that generate the dynamic of the whole volume in an allusion to the organic world and a reinvented nature. This abstract geometric tension is also reflected in the design of the entire garden, with lawn zones that extend in ‘leaps’ across the hard pavement, like regular ‘botanical slabs’.

Next to the steel cocoon, dynamic wooden configurations form a striking system of seats and routes on the central deck, containing the solarium zone with the built-in hydromassage tub, a custom piece made of steel. A penthouse wrapped in greenery where the landscape penetrates and surrounds the spaces of the home in precise episodes, then finding free expression on the roof terrace that in an almost surreal way forms a modern garden floating over the rooftops of New York.

Views of the garden terrace surrounded by the buildings of the New York skyline. Diamond Chairs by Harry Bertoia for Knoll International.
The wooden deck transforms into a volumetric surface, containing a hydromassage tub in the flat zone. Landscape project by HMWhite Architects.
Other view of the living area: in the background, the dining zone with a custom table, Flavin chairs by Rodolfo Dordoni for Minotti.
View of the living area: Powell sofas by Rodolfo Dordoni for Minotti; Mart armchair by Antonio Citterio for B&B Italia; custom coffee table; carpet by Tai Ping.
In the living room a small green courtyard has been created, with a staircase leading to the roof garden. To the side, plans of the roof garden and the apartment below. Sarus lamp by David Weeks.
The custom metal staircase has an architectural skin in perforated stainless steel with an algorithmic pattern.
The fractal geometry of the overall facing emerges on the terrace as a sculptural figure, a reminder of the orld of plants. Produced by Marzorati Ronchetti, Cantù.
Exploded axonometric of the overall project.
#Design #Projects