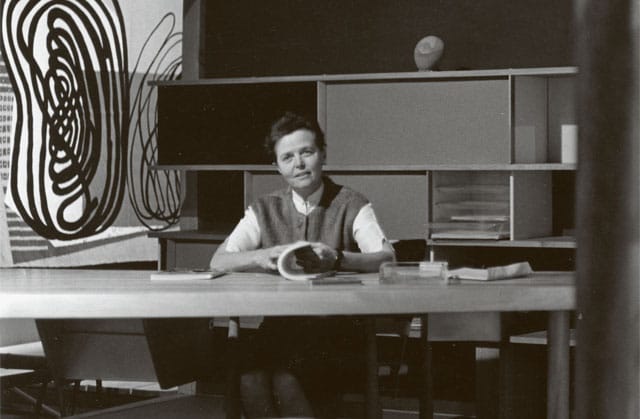 That same year, after marrying (she divorced a few years later), she set up her atelier in an old photography studio on Place Saint Sulpice and began to enjoy life. “I discovered English literature”, she writes in her autobiography, “the films of Cocteau, Louis Armstrong. I learned the Charleston… I had a tomboy haircut and wore a necklace I had designed myself, beads of chromium-plated copper. I called it my ball bearings, symbol and a provocation, underlining the fact that I belonged to the mechanical civilization of the 20th century… On the street, the young bucks of Paris couldn’t help noticing me”. Exuberant of body and mind, Charlotte was always aware of her intellectual and physical attributes, and proud of them. In January 1999, at the debate “Desseins des femmes” organized in Paris by the magazine Intramuros, where she arrived in a shocking pink running suit with New Balance shoes and the usual topknot tied with a pink chiffon scarf, Charlotte, with a certain coquetry, said she was chosen by Le Corbusier, with whom she worked from 1926 to 1937 as a partner to develop their furnishings program, “not for my talent but for my beauty”. A lover of sports and nature, of mountain excursions and vigorous swimming, a tireless traveler with a backpack, proud of her toned body (she was often seen topless with the famous necklace of chromium-plated copper), she put the energy and vitality of her physique into her projects. A lover of technical and mechanical things, she was always a part of her time, attracted by the contemporary world and its evolution, convinced that design is first of all a useful and functional art, and that the fate of objects is to be human. She pursued rigor but also smoothness and playfulness. She believed that contemporary objects should be responsible. “Being responsible”, she said, “means continuously putting yourself on the line: even the most insignificant new discover puts us on a different plane and alters the whole of our convictions” (Intramuros, interview with Sophie Tasma, March/April 1993). An overview of her idea of decor was presented in 1929 at the Salon d’Automne in Paris, in the installation “Interior furnishings for a dwelling on the theme of shelving, chairs and tables”. “The layout was free, the space open”, she writes in her autobiography. “At the center of the room a stainless steel basket, and a large cabbage, like a bouquet. I hung some garments from my very precious personal wardrobe in the bedroom… In our conception there were no walls, just shelves, like a divider to structure the space… the transposition of our dreams was there, present, palpable, freed from the dust of old habits”. Nuage, the bookcase Cassina has reissued in 2012, is a ‘palpable transposition’ of her dreams. A rigorous but flexible, even playful piece, thanks to the colors of the shelves, but one plagued by a long lawsuit over its authorship. The tale is told by Jacques Barsac, who together with his wife Pernette Perriand, Charlotte’s daughter, takes full-time care of the historical archive of the designer. Until the start of 2012 Nuage had been attributed to Jean Prouvé. This was stated by the Parisian dealer Jousse Seguin, also in a publication in 1998. The misunderstanding comes from the trademark: the Nuage bookcase was made in 1952, 76 pieces, by the atelier of Jean Prouvé, who at the time had 300 employees and had called on Charlotte Perriand to help improve the aesthetics of his products. One Nuage was rediscovered in Paris at the Maison du Mexique and replaced with an Ikea bookcase. And since the furnishings of Prouvé, in the mid-1980s, had higher market value than those of Perriand, the piece was labeled as a Prouvé. Thanks to great tenacity and many archival documents, Jacques and Pernette won their suit in 2009, and in 2012 they also won the appeal against Jousse Seguin, who had to pay 120,000 euros and to take the book on Jean Prouvé with the erroneous attribution off the market. So Nuage has been returned to its rightful maker, Charlotte Perriand, and is now part of the prestigious collection of reissues by Cassina, the company with whom the designer worked since 1972, due to the replicas of furnishings by Le Corbusier, with the hope of being able to remake some of her own works. Now it has finally happened.