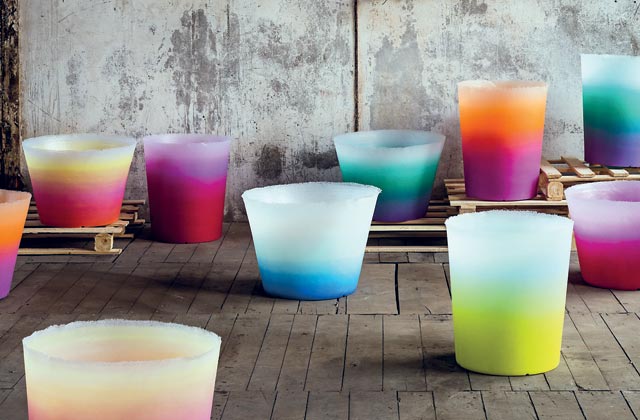 A designer, artist and demiurge, Massimiliano Adami has always been a very contemporary figure with his many facets of identity, appreciated by art-design galleries but more challenging for companies in search of creators of beautiful forms.

With the Alba project for Serralunga, Massimiliano demonstrates that he has found a place inside the logic of industrial production as well. A role closely linked to the project material, which Adami observes, manipulates and reinvents from a new vantage point. This already happened with Alcantara, then with the porcelain stoneware of Refin, and more recently with the polyurethane of the self-produced Gommapiuma Décor collection. Now the material is polyethylene, which Serralunga uses to make roto-moulded products. Once again the project comes to life in the hands and the workshop of Adami, where he returned with a big box of powdered material after having seen the production process for vases, lamps and furnishings. “Since everything is made with a single mould,” Adami says, “these objects share a uniform, monochrome, monolithic look that immediately triggered the idea of working on their materic identity.” No sooner said than done: Massimiliano geared up with an electric kiln, cake moulds, heat pistol; on a small scale, and in a very basic way, he reproduced the mechanisms and phases of rotomoulding to explore its possibilities. Modify the rotation system of the arm that holds the mould and separating the coloring into multiple phases, the designer has achieved an interesting expressive result: a small vase that was previously uniform in color takes on an evocative shading that makes it seem much lighter; the surface loses its compact image, trimming down in an irregular border that takes on the delicacy of modern lace. All this sufficed to make Marco Serralunga, CEO, and Raffaella Mangiarotti, art director, understand that this invention of the process can open up a new panorama of aesthetic potential for rotomoulding. The Alba collection of vases shown at the latest Salone del Mobile has an intentionally archetypal form. The material, with its chromatic vibrations and particular touch, gives meaning to this project which has the virtue of unveiling the craftsmanship that lies behind the serial production of polyethylene objects, creating a starting point for new product research.

Some of the shadings of the Alba collection of vases, produced by Serralunga in two-tone polyethylene.
#Design #Projects