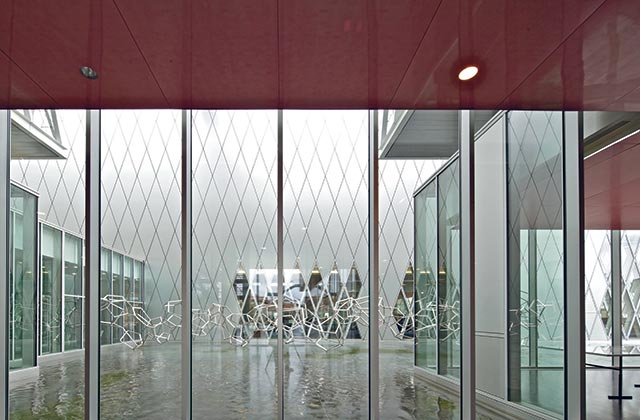 With the French Revolution in 1789, the institution of the National Archives was born, a place to gather documents on the history of civilization; from Merovingian papyrus deeds to the trials of the Knights Templar, the Declaration of the Rights of Man to the phases of French history (the diary of Louis XVI, the last will and testament of Napoleon, the Jeu de Paume oath, the national Constitutions).

All collected in about 320 kilometers of shelving, that since the birth of the French Republic narrate the history of the country and its relationships with world cultures. Such a huge collection of documents, acts, declarations and thoughts contains values that go beyond scientific evidence and historical documentation, entering the most symbolic dimension of collective memory of an entire nation. The building that contains such a treasure can certainly not just respond to the functions of conservation and organization. It also has to represent national values. A home for all this, if seen in relation to the utopian period of the “Architects of the Revolution” (1789-1799), might resemble the spaces conceived by Étienne-Louis Boullèe for his gigantic Bibliothèque Nationale, in which the dimension of the ‘secular temple of culture and memory’ went beyond the image and idea of the ‘simple’ public building. The project by Massimiliano & Doriana Fuksas for the new facility of the National Archives is like a metal bastion, a monolithic architectural treasure chest, standing at the jagged edge of the banlieue, and establishing a close compositional relationship towards the city. The effort, without rhetorical excess, has been to configure, as the architects put it: “a work that conserves memory and collective identity, while remaining open to contemporary artistic expression. Not a perspective of contemplation, but one of discovery, research and participation”. The architectural complex, promoted by three Presidents of the French Republic (Chirac found the financing, Sarkozy monitored the construction, Hollande presided at the opening ceremony on 11 February), is composed of two main episodes: the monolithic volume of the parallelepiped that contains the documents, covered with an aluminium skin etched by a rhomboid pattern and interrupted by glass portions corresponding to the reading room and the entrance route, and the part of the “satellites”, connected by raised walkways over a veil of water, organized as a careful sum of horizontal glazed floor-spaces marked by a visible structural grid that reprises the rhomboid motif of the aluminium facade of the complementary volume. The urban bastion of the archives proper (220 storerooms on ten levels) facing the territory is thus countered by the dynamic revelation of the volumes facing the city that slope down towards the urban space, seeking a closer relationship of scale and a morphology paced by distinct elements that are nevertheless part of an overall design synthesis. Here, floating over the veil of water, the stacked glazed horizontal volumes, not unlike the project for the Ferrari headquarters at Maranello, contain the offices, the exhibition space and the conference room, ‘colored’ by the red of the Carla chair, designed for Poltrona Frau. The confrontation between the two worlds of the building, the union between order and ‘sublime chaos’, to use a term much appreciated by Massimiliano Fuksas, are reinforced thanks to the landscape design by Florence Mercier, and the contribution of contemporary art, consisting of three key works. Over the water, in the connecting voids that – as in the Milan Fair – represent the value and importance of the architecture on a par with the constructed parts, a geometric sculpture by Antony Gormley develops a concatenation of reticular dodecahedrons in metal, establishing an apt relationship with the structure of the building. Pascal Convert, with the series of concrete ‘safes’ set into the adjacent area, underlines – through the reproduction of the faces of protagonists of French culture – the roots of collective memory. Finally, Susanne Fristscher unites artistic intervention and architecture, making suspended ceilings for the satellites like leaves of red shaded steel, to emphasize the play of depths of the volumes, organized at different heights. A public work of great breadth, a work of architecture that “gives rise to an identity whose roots lie in memory of the past, with a gaze aimed at the contemporary world and the future. An identity and a memory that belong to France, and to all of humankind” (Massimiliano & Doriana Fuksas).