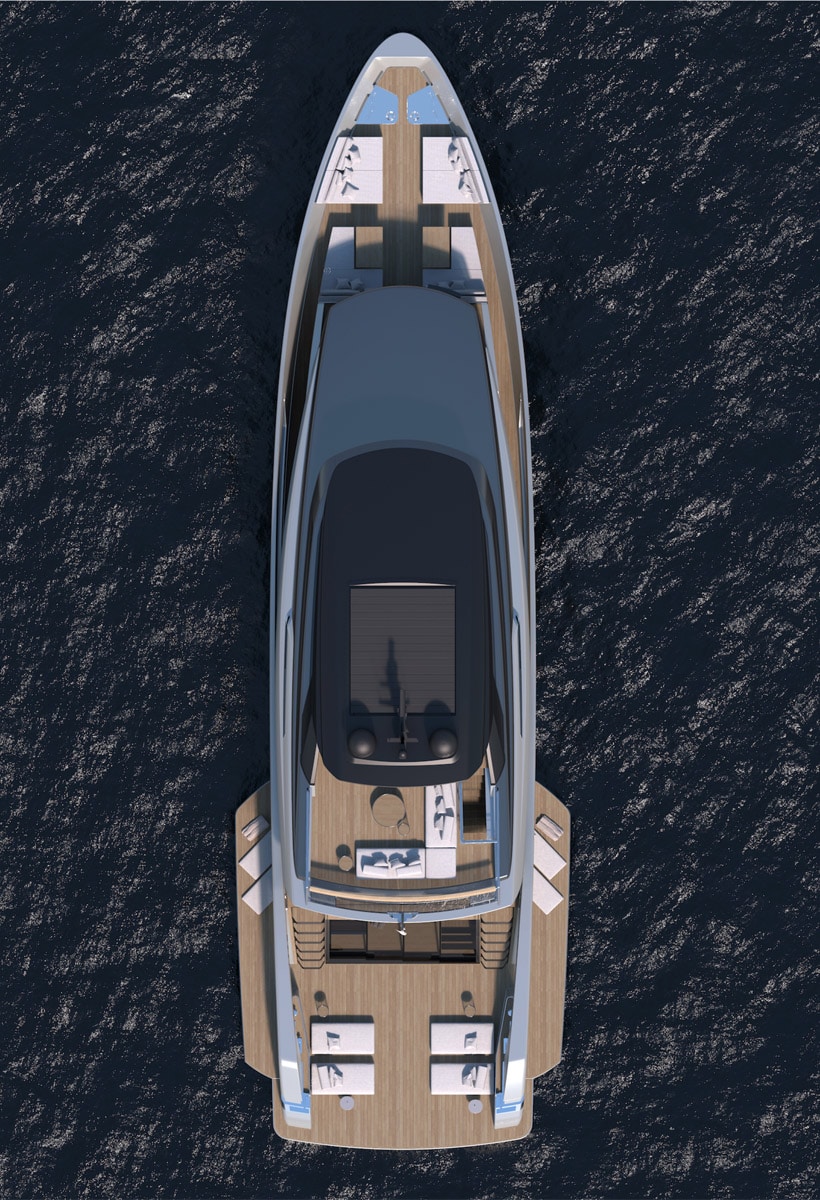 #PieroLissoni
A floating loft
The new SX112 by Sanlorenzo is the culmination of a typological research aimed at identifying a new potential way of living at sea. On board the barriers fall, the boat opens out and creates close ties with life on the water

A synthesis between the classic motoryacht with flying bridge and the explorer typology, the new SX112 is the flagship of the SX crossover line of yachts combining style, flexibility and functionality through a shared vocabulary. It is an innovative typology in the nautical world launched in 2017 by Sanlorenzo at the behest of Massimo Perotti, the company’s Executive Chairman, with the purpose of opening out the craft to create a direct relationship with life on the water. The focal point of the project and the SX crossover line, stemming from an idea of the architect Luca Santella di Sanlorenzo, is the new stern area, a choice that offers the project new and striking scope for usability. The exterior design was overseen by Bernardo Zuccon of the studio Zuccon International Project, also the designers of the SX76. The interior was designed, as on the first unit, Piero Lissoni, since 2018 also the company’s Art Director. 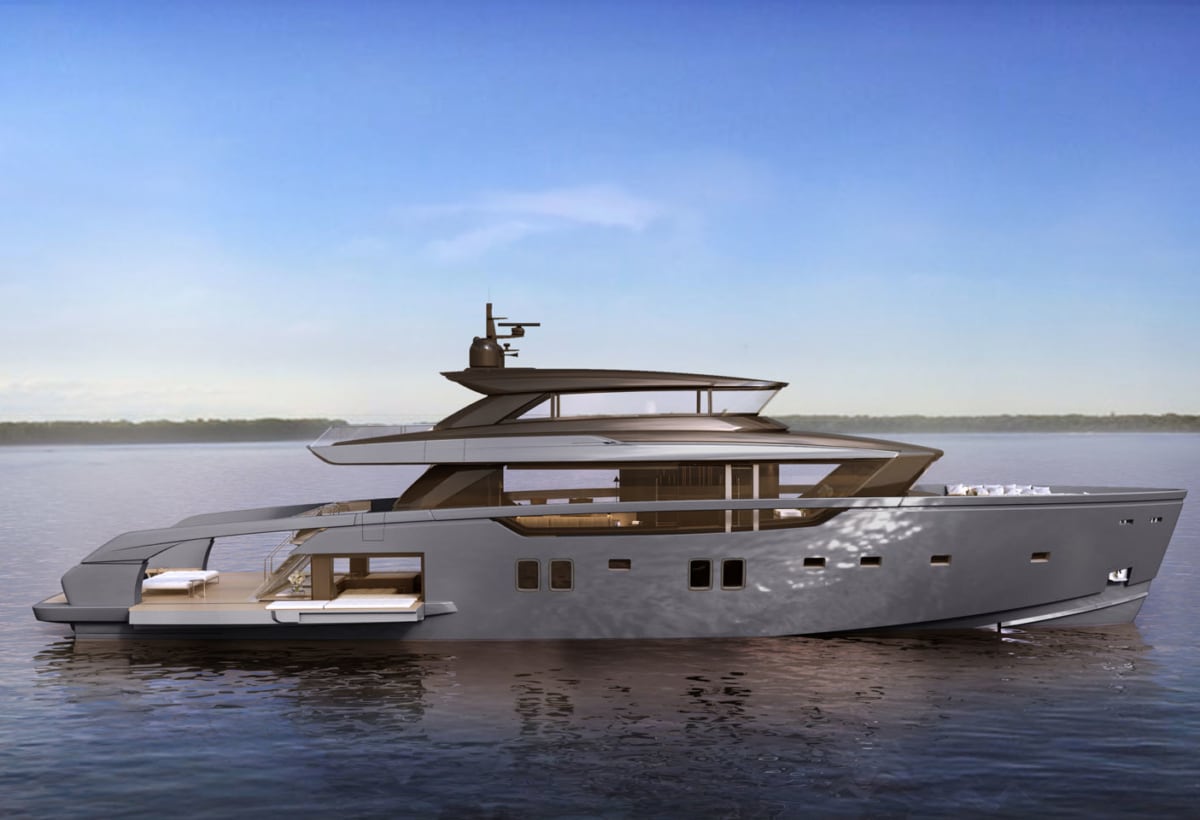 7
The lines of the SX112 are modern and contemporary, unique in a nautical panorama that starts from the first SX88 model. The windshield with its reverse corner varying the design is intriguing.

The new model offers a spacious beach club area of some 90 square meters, extendable by terraces that project over the sea. Here an internal space set up as a gym is directly connected to the outside through large sliding windows that maximize the connection between interior and exterior. The forward part of the main deck is devoted to convivial and relaxed living with a spacious sundeck. The area can be converted into a shaded dining area. 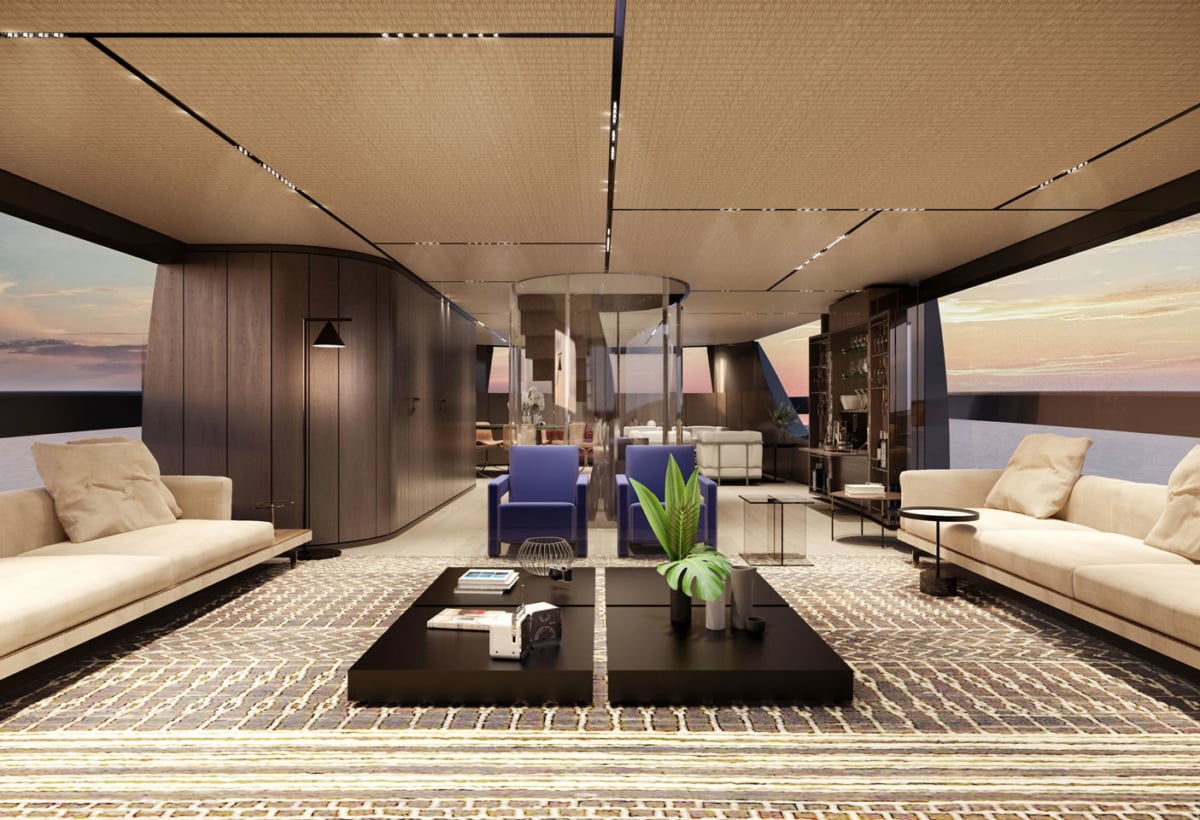 4
The large internal living room. Details and materials are the leitmotif shared by all the interiors, carefully chosen by combining Japanese purity with Italian elegance.

The main deck, in keeping with the scheme of this range, is designed as an open space: a reinterpretation of the concept of space inside a boat that develops as a single environment from stern to bow, in the living area, bar space, dining area, seamless between interior and exterior. Large windows offer direct views of the sea and magnify the concept of the loft. An innovative solution, made possible by moving the only wheelhouse on board to the flying bridge, so freeing the bow area of the saloon. 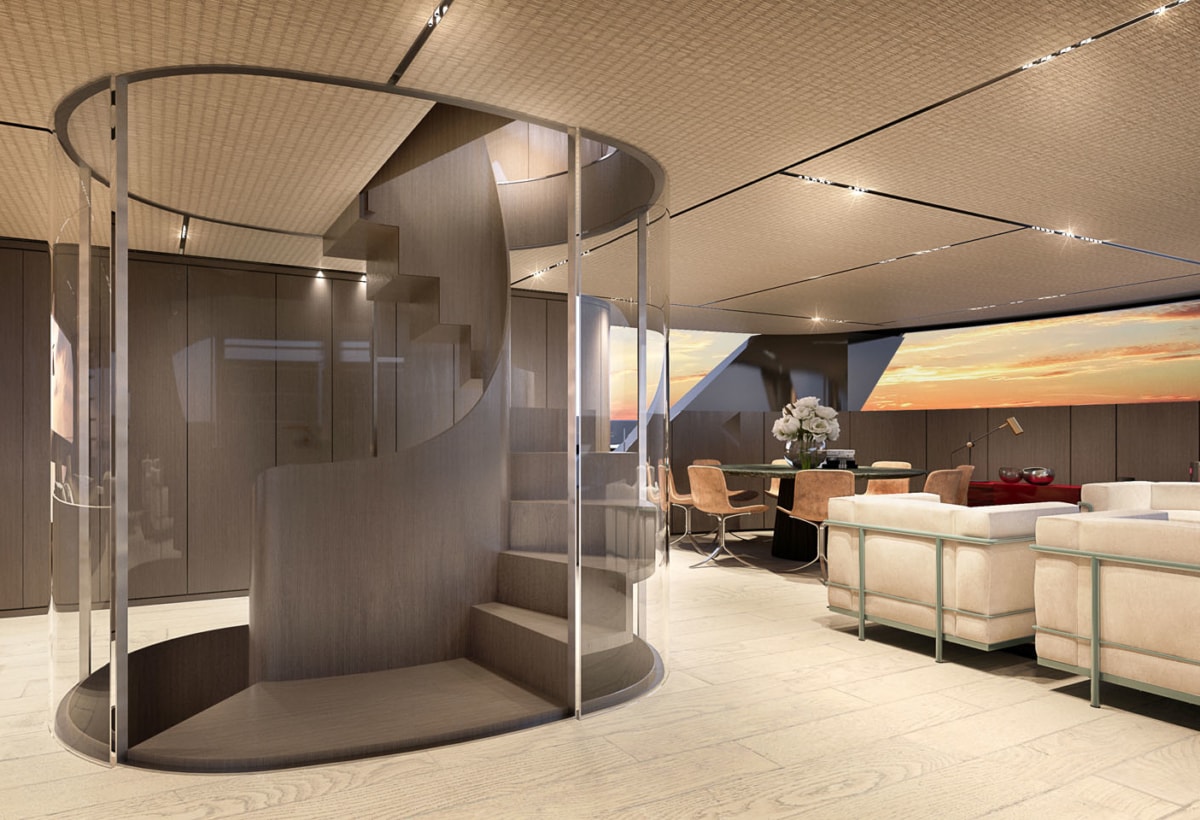 4
The stairs are a fundamental element of Lissoni’s project. The spiral staircase connects the three decks from the inside and on the main deck it is enclosed in a transparent oval volume that enhances it and creates the impression it is floating in mid-air.

The stairs are once again a fundamental and focal element in Lissoni’s project. A helicoidal staircase connects the three bridges from the inside. The interiors are a perfect example of Lissoni’s style which combines refinement and simplicity, in a space defined by soft and neutral colors flooded on all sides with natural light to create a warm atmosphere with domestic comfort. This is enhanced by the way the furnishings have not been adapted to the spaces but are freely arranged within them, as in a house, being combined to achieve a perfect fusion.

What is it?
A new crossover 34.16-meter yacht.
What is the design concept?
It is a development out of the trend begun with the SX88 and SX76 models; a challenge enriched with innovative contents and proposing a new way of experiencing the sea by creating a close relationship with nature.
How is it made?
Laid out on 3 decks, it is 34.16 meters long and 8 wide. On the main deck there is a large open-plan living area, on the upper deck a flybridge with wheelhouse and relaxation/dining area. The lower deck has three large cabins, a master suite and two VIP cabins in addition to a lounge area enclosed between wooden wainscoting and mirrored walls that can be converted into a cabin with a double or twin beds. This level also has the galley connected with the crew’s quarters.
Who designed it?
The external lines were designed by Zuccon International Project with interiors by Piero Lissoni. The SX crossover line developed out of an idea by the architect Luca Santella.
Who built it and where?
The Sanlorenzo shipyard in Viareggio
How is it built?
Made of fiberglass with a carbon fiber superstructure, the project is made possible by a unique combination of creativity, research, industrial perfection and craftsmanship, qualities that have made Sanlorenzo an excellence worldwide.
What makes it special?
The synthesis between the classic motoryacht with flying bridge and the explorer type. With an innovative concept, the craft opens to the outside creating close ties with the marine environment. Having the only wheelhouse on the flybridge makes it possible to create a palatial open space on the main deck. The focal point of the project is the immense 90 square meter beach area which can be enlarged by terraces that extend over the sea.
What is it like?
The external lines are a point of fusion between a motoryacht with a flybridge and an explorer. The stern is fully open where watercraft and tenders can be placed (as on explorers).
Furniture brands on board
B&B Italia, Boffi, Cassina, Flos, FontanaArte, Glas Italia, Living Divani, Oluce, Technogym, Vitra, Knoll, Kartell.
How does the designer describe it?
“The SX112 is another experimental model, like every new model we work on with Sanlorenzo. In this case we have brought an even more architectural attitude: it is a floating building. We have linked the spaces exactly as in a building through highly technological apertures connecting interior and exterior. In practice, we have built a floating villa.” Piero Lissoni. “On SX112 there is more ‘oxygen’ available to convey the stylistic message, in a logic of signs in which the harmony and balance of the volumes can be related to the principles of organic architecture. The forms are fluid, almost a reminder of the nature of large marine mammals.” Bernardo Zuccon
#Design #Projects #onboard