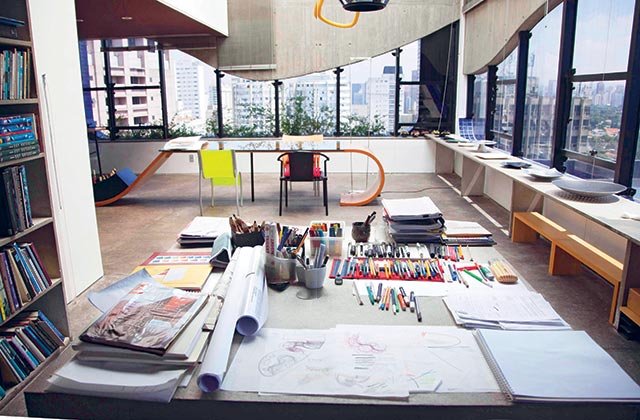 Light, unified spaces with two-storey areas, a ribbon window that frames the urban skyline, all wrapped in an architectural container marked by the figurative presence of reinforced concrete, art and color.

This is the home-studio of Ruy Ohtake in Sao Paulo, a synthesis of interiors that is an apt representation, in its alternation of curved lines and regular geometric forms, of a constant in the legacy of Brazilian modernism, from the first masters like Lucio Costa and Oscar Niemeyer to the present. Ruy Ohtake, a Brazilian architect born in 1938, and a student of Niemeyer, has continued this research. His works of architecture, on any scale, always contain the mixture of the rigidity of the rationalism imported from Europe with the sensuality of curves, drawn from multiple aspects of Brazilian culture: from the local Baroque heritage to the softness of the movement of bodies dancing to South American melodies. This ‘autobiographical interior’ can also be interpreted along these lines, revealing a stimulating design path in its overall compositional solution. On two levels, the 17th and 18th floors of a residential building, the ‘Ohtake space’, rather than a home (it lacks a kitchen and a closet) is more like a living environment custom tailored for its user, who in this case is also the architect of the overall solution. The environment represents, in a private way, the character and behavior patterns of its maker. For example, the desire for an ongoing relationship with the city, seen in the continuous openings that run along the main facade, and perhaps in the lack of a kitchen, which ‘forces’ him to leave the house and workplace for appointments at lunch and dinner, finding places for the pauses of the day outside, in the city. In an overall area of about 400 square meters, Ohtake organizes the route through the interiors. On the lower level the large unified space is flanked at two ends by a small office that is a prelude to the gallery space behind it, and by a lounge area with a wellequipped bar. Upstairs, connected by a staircase and a large two-storey corner zone, we find a more private dimension, with a bedroom, a study and a library, as well as a small, hidden terrace. As in other projects, Ohtake uses the furnishings as part of the overall architecture; the long near piece that extends for sixteen meters, in relation to the glass facade, like an architectural wave, functions as a bookcase and then becomes a desk, reflecting the compositional tension of the ‘fixed furnishings’ in reinforced concrete (geometric shelving in blue and ochre hues), alongside custom steel furnishings that create a dialogue with pieces by other designers, modern masters of the recent past, and contemporary experimentation.