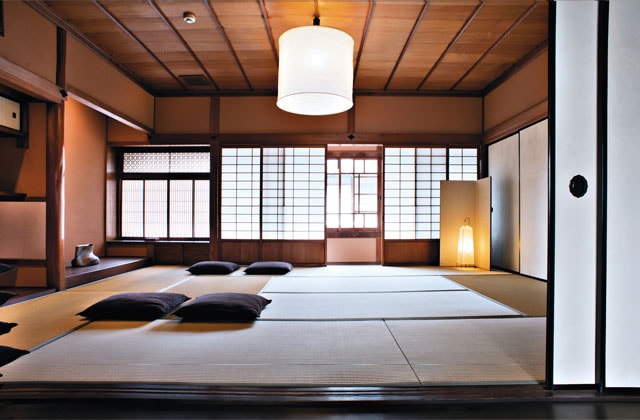 I couldn’t help noticing his surprising resemblance to the Wink Chair, his most famous work of contemporary design, created in 1979. Smiling, never still, curious, vivacious, just like the Wink, which in some ways was a forerunner of the sensual, colorful results of the pursuit of a new interpretation of functionalism on the part of Memphis. Kita showed me a new lamp of his, made of paper, by hand, in keeping with the great Japanese crafts tradition, and he told me about the art of making these varieties of paper, an art passed down from generation to generation, but threatened with extinction because young people seemed to prefer working for Sony or Toyota, instead of making things with their hands. So Kita was trying to give a small paper workshop a new lease on life, a new more contemporary form, to keep the tradition alive. In 2010 Kita purchased and restored a traditional wooden house at Sasayama, a small town in the mountains of Hyogo Prefecture, about 100 km from Osaka. On the ground floor there is now a small gallery that shows objects and furnishings designed by Kita and products by craftsmen who are still part of the ancient Japanese tradition of pottery, lacquer, paper and metal. So how did these collaborations get started? “My acquaintance with exponents of the Japanese crafts tradition date back to the second half of the Sixties, when the sector was in a real slump and people tended to believe that old things were not in step with the times. A craftsman from Mino, who made washi paper, told me he was thinking about abandoning his art, so I promised him I would try to find new applications for washi in my work. I got a chance to do that when I went to Italy, and used the paper in the design of several lamps. This was the period of the furnishings boom in Italy, and my idea met with success, and in fact that craftsman began to receive large orders for work. So I realized that a way could be found to help traditional Japanese crafts to survive, and that led to collaboration with other makers, like the artisans who work with lacquer in Wajima, or the ceramics of Arita. The decision to make this focus on traditional arts my life’s work dates back to the success of the Tako chandelier, made with washi paper”. You have brought me to Sasayama, a place unknown even to many Japanese. I saw that there is still a large settlement of traditional wooden houses. What prompted you to buy one of them and restore it? “The products of traditional crafts are, in substance, made to be used in life, and therefore in living spaces, or where human beings interact. So the environment is essential for their existence. But the continuous diminishing of houses built with traditional Japanese architecture has been a real blow to the crafts sector. Another problem is that the Japanese, who are nearly all too busy to sit back and enjoy life, have packed away all the objects, all the things that once served to bring elegance an atmosphere to holidays or to the ceremonies of everyday life. The characteristic trait of a traditional Japanese home is its magnificent balance with nature, as can be seen from the architectural differences in various zones of the country, to adapt to the climate and to different environmental factors. Today people talk a lot about ecology, but in the past they paid more attention to nature. Now I think we need to conserve the traditional homes, and the precious heritage of wisdom, life and beauty they contain and embody”. What does the design of Aquos, the television that has brought success to Sharp over the last 10 years, have to do with the design of a lacquer box you sell in your gallery? “I always think about how lifestyle will change in the future. And in the renovation of this old house I have conserved the exterior, that of an ecological dwelling that dates back to over 100 years ago. Inside, though, I have used advanced technology to make it more comfortable. In 2003, when most televisions were in black or metallic plastic, I designed a custom series of LCD televisions finished like furniture, with frames in cowhide, wood and lacquer. The television in this old house is the natural lacquer model, and I think it fits nicely. Nature and high-tech are two important concepts in my future”.