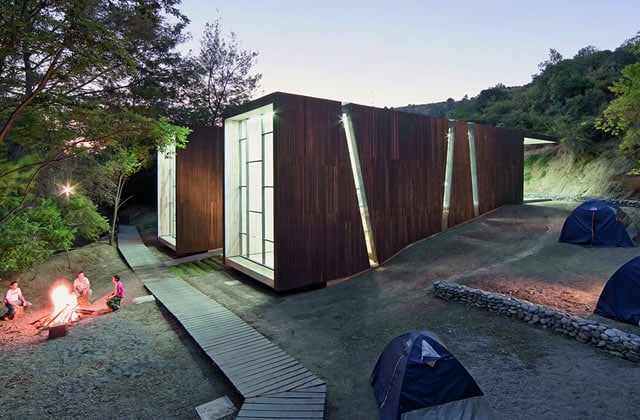 Chile raises its boys like a proud father, but some are luckier than others.

Mass public schooling won’t take a youngster beyond his conditions of poverty, while elite private schooling makes ties that will help throughout a lifetime. In a territory about 4000 km long, with just 17 million inhabitants, there are as many 50 private architecture schools. A dense constellation that forms its own network of social relationships and collaborations, Chile’s upper crust achieves a favorable symbiosis between the university and the world of work. Claudio Molina, Daniel de la Vega and Eduardo Villalobos are friends, and they have that admirable sense of sharing that is still so widespread in a South America that has never stopped growing. The three men are young and talented. They have recently begun to do professional practice, a marvelous and difficult pursuit, often at the borders of the production circuit. They teach and study, work for other architects and enter competitions, working through long nights on sips of maté and hope. As in the case of the competition for the Scout Space organized by Saint George’s College, in the Vitacura district, a zone where two of the architects spent their childhood. This was a good opportunity, and their first constructed work is the result of a contest with 13 other projects. It won due to its simple program and original approach. The small world of participation of the Boy Scouts would gain a new meeting place inside the campus park, between the promontory, the canal and the woods. Two multifunctional halls, five storerooms, a barbecue area, an outdoor accessorized space for 300 persons, an indoor facility for 150. Nature in Chile is a landscape lived with great respect, in which human intervention is often secondary and always minimal. So Claudio, Daniel and Eduardo thin out the woods, remove the eastern shore of the pond and maintain the continuity between the promontory, the view of the school and its courtyards, and the city beyond the oak grove. The architecture splits the program into two large volumes clad with plywood boards measuring 24×9 cm, avoiding artificial concentrations and creating sustainable alternations. Built on a low budget, it marks the interiors with exteriors, white walls with black cuts, as the light forms bright diagonals in an empty, flexible space. The lower level encloses small dressing rooms and storerooms under the internal steps and the slope; the spaces then expand in the large amphitheater-workshop spaces above, two storeys in height. From the southeast the moods of nature penetrate the large windows formed by rectangular casements, climbing the slope and pouring into the multifunctional outdoor level sheltered by horizontal extensions of the roof. United but divided, the two lungs of this young work for young people breathe toward the west, where three semicircles formed by stone seating observe the figure of a wooden parallelepiped. A lookout turret and landmark, extending the gaze beyond the borders, offering a view below of the tents in which youngsters grow up.