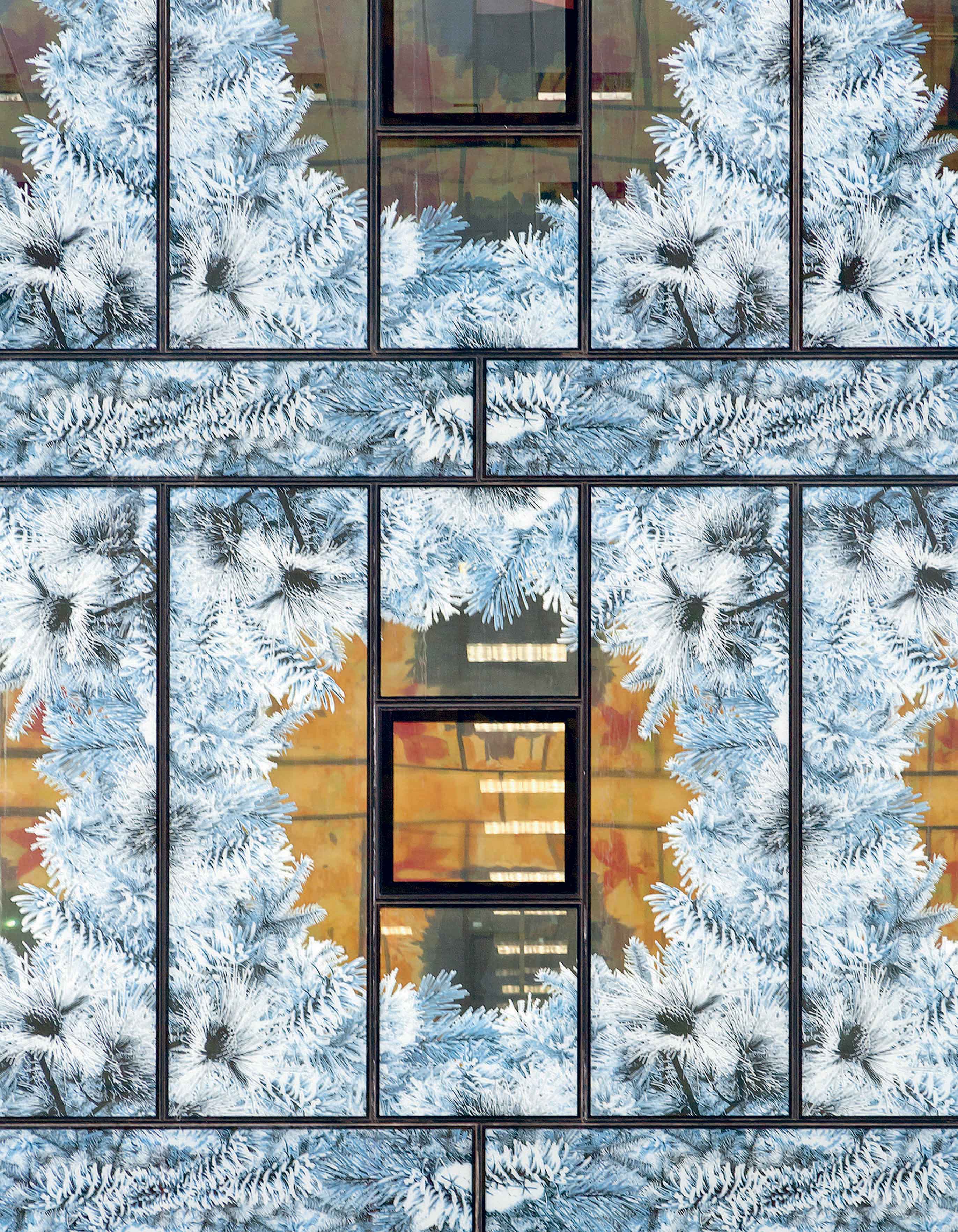 In Saint Petersburg, Russia, a business complex that reinterprets the spirit of the place in a narrative, iconic key, on a site that was once a nursery for flowers and plants, and then a privat e park. The approa ch transforms the mute curtain walls of the office buildings into an expressive architectural skin where colors match those of the foliage in the different seasons of the years

On the banks of the Neva River, in the Kalininsky district of St. Petersburg, the new office complex is composed of three orthogonal blocks that form a courtyard open to the north, towards the urban fabric that takes form beyond several small lakes, part of what was once the botanical nursery of the Smolny Institute.

A green zone transformed in the 18th century to make a landscape park for the sumptuous residence of the Kushelev-Bezborodko family. At the end of the 19th century the family abandoned the estate, and it became the site of a nursing home. The property was divided up into parcels.

After the Revolution the area hosted the Rossiya engine factory, which stopped operating in the 1980s, leading to a general state of abandon and decay. The original buildings and the design of the historic park were lost. The project for a new business center was the result of a public competition for the master plan of the whole zone.

A project of micro-urbanism that has restored and reutilized the existing structures, while partially reassembling the atmosphere of the original park, which was the inspiration for the overall image of the new Seasons Ensemble project. While the layout with three architectural blocks reinterprets the classic typology of the open court formed by regular, recognizable volumes, in this case a reflecting pool produces striking reflections, while the treatment of the curtain wall facades, in keeping with the tradition of office buildings, becomes a proving ground for chromatic and figurative experimentation.

In a game of references to the memory of the site and its landscape history, the three buildings are ‘dressed’ in an artificial botanical skin that fills up the pondered, regular texture of the glazings, held in place by slim, elegant black frames for a striking graphic effect. The panes are printed with compositions of macro-leaves arranged in dense fields, not without balanced chromatic notes like the red leaves of the building dedicated to the autumn season (the Osen Business Center, from the Russian word for autumn), which frame the tops of the circular portions left transparent.

Bright green and yellow tones appear in the leaves on the parallel building named for the summer (Leto), while the winter season is represented by a perpendicular building, closing off the courtyard to the south. The Zima Business Center combines winter motifs of white flowers, the blue of ice, and certain strategically positioned architectural segments, like Corinthian columns topped by lions, arches and moldings, all printed on the facade glazing.

The same treatment has been applied to the common areas and the entrances of the three blocks of the complex, works of architecture whose intentional structural and typological simplicity positively disrupts the anonymous image of the normal office building. Functional quality is joined by the clarity of the morphological composition and the narrative dimension triggered by the figurative treatment of the facades. A methodology that Sergei Tchoban has used on many occasions, adding the value of a story to those that might remain in the mute modular facades of curtain walls.