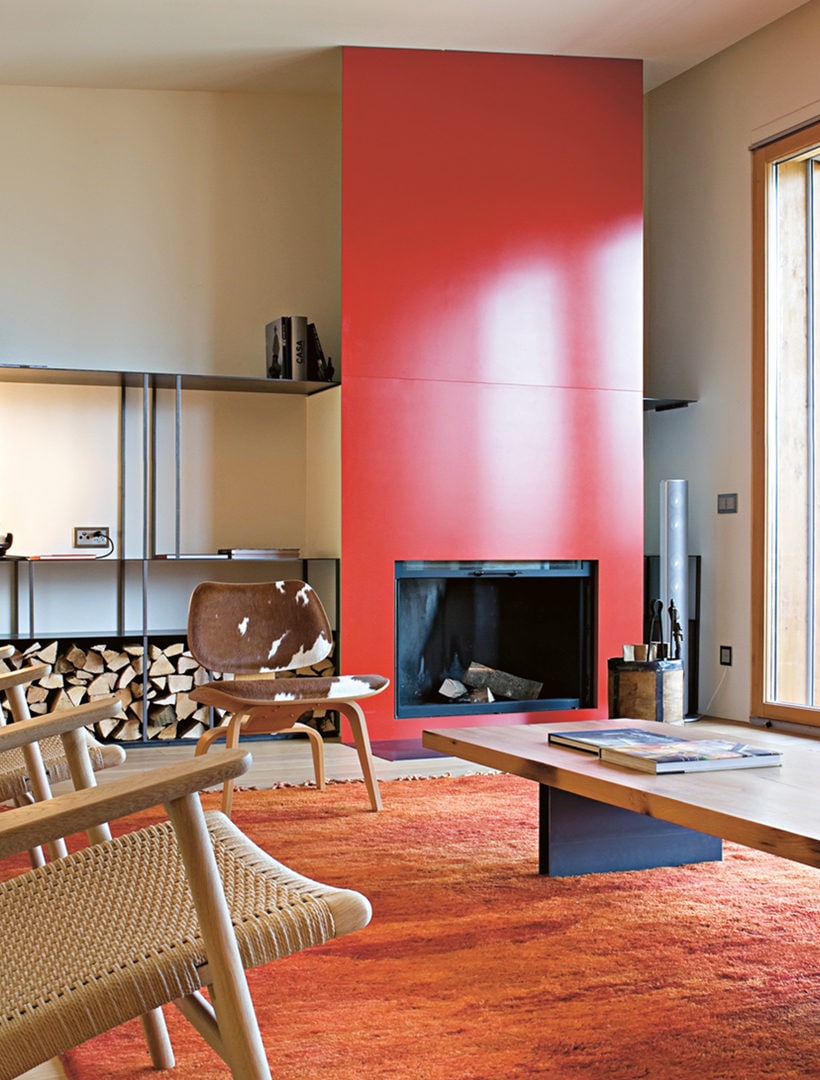 Two apartments get a new lease on life as an urban villa, to interpret the desires and lifestyle of a couple who enjoy socializing with friends. It happens in Saint Moritz, Switzerland, on the upper level of a residential building facing the Bernina Glaciers. An experiment in pure design that reformulates the concept of relaxation in the mountains

“Do you want to know what makes this project special? The fact that the clients asked me to make an urban villa at the top of a four-story apartment building,” says Umberto Zanetti, with three decades of international experience, from his Milan-based studio of architecture and design.

“In other words, we wanted to achieve maximum independence, as in a single-family house, while enjoying a breathtaking view of the Bernina Glaciers, thanks to the height of the top floor.”

The apartment, in fact, is on the fourth and upper level of an elegant apartment house in Saint Moritz, one of the most exclusive resorts in Europe, in the heart of the Swiss Alps.

What was the winning move in this project?
To wager on the original layout in two separate apartments, with the complicity of the clients, to transform a problem into a strong point. I took advantage of the existing corridor leading to the second apartment, at the end of the building, and passing through the first, as the axis for the paths of the new design: a service strip has been created in the central zone (kitchen and bathrooms), which is ‘permeable’ at multiple points thanks to passages and views, connecting to the area organized to the south, with the main facade of the house (dining and living areas, master bedroom and guest area).

So the main accent is on functional quality?
Of course, though I have also tried to avoid rigid spatial arrangements. The choice of making crosswise passages makes the rooms more permeable: we have replaced several walls with light dividers that expand space while conserving the memory of the original layout.

A rather complex arrangement, that organizes space while also adding different facets…
Yes, but there is an alchemy that holds it all together: wood becomes the unifying element, which visually attenuates the complexity of the layout.
Natural oak runs along the floors in long planks and ‘folds’ up onto the walls. It also extends beyond the wall surfaces with panels in a thickness of 4 centimeters, and in some cases it is dematerialized in slender slats, forming sunscreens to enhance the play of light.

What about the furnishings?
The fixed furnishings are zero-km, locally sourced from highly skilled artisans, making it possible to organize the interior design at the site: the kitchen, tables and bookcases are all ‘tailor-made’; in some cases the furnishings are built into the walls, as in the case of the wardrobe cabinet, set into the wooden surface. Another leitmotif is the choice of color, linking back to the classic tone – RAL 3020 red – of the Swiss flag. The sheet-metal strips on the wall profiles are also in red, as is the fireplace, incorporated in a bookcase-cabinet in iron and wood, which becomes a place to store firewood near the floor. Finally, the bathroom blocks, also including a spa, feature precious marble, but with a simple, essential mosaic finish. There are also iconic pieces of design history that punctuate the spaces.

And the light?
From a technical viewpoint, I have chosen models built into the wooden facings, alternating with iconic contemporary pieces. But the true protagonist is natural light, which enters in abundance through the large windows of the southern facade, and circulates freely in the spaces thanks to the full-height portals. It is filtered by sunscreens, or it plays with the visual cones created by the openings sculpted in the walls. The ceiling, finally, with a slight mansard towards the north, reflects and channels both natural and artificial light, again making you forget that this is ‘only’ an apartment.

The living area, open to the mountains, features iconic design creations: from the chairs by Hans J. Wegner (Carl Hansen & Son) to the seat covered in ponyskin by Charles & Ray Eames (Vitra) and the classic LC3 sofa by Le Corbusier, Pierre Jeanneret and Charlotte Perriand (Cassina). The bookcase with built-in fireplace was designed by ZDA, while the track lighting is the Diapason model by Kreon.
A detail of the entrance.
For the kitchen, the tailor-made furnishings are in oak, like the table placed on a double support in black waxed sheet metal (designed by ZDA). The Y Chair by Hans J. Wegner (Carl Hansen & Son) joins the Royal suspension lamp by Arne Jacobsen (Louis Poulsen). Lamps by Kreon.
A detail of the kitchen, lamp by Belux.
Reverse view of the living area towards the entrance. The partition of oak slats screens the dining area. Custom table by ZDA, chairs by Carl Hansen & Son and sofa by Cassina. Lights by Kreon.
The plan of the apartment (construction Edy Toscano AG).
One of the openings sculpted in the wooden facings, making it possible to create visual contact from one space to the next: the view extends from the studio to the living area, to reveal the beautiful panorama (chair by Vitra).
Detail of the master bedroom (lights by Kreon).
The bookcase designed by ZDA is inserted in the wainscoting by means of a simple structure in iron and sheet metal (works in iron Bauch Metallbau AG), also creating a functional space for firewood. Noce lamp by Achille Castiglioni (Flos); built-in fixtures by Kreon.
#Design #Projects