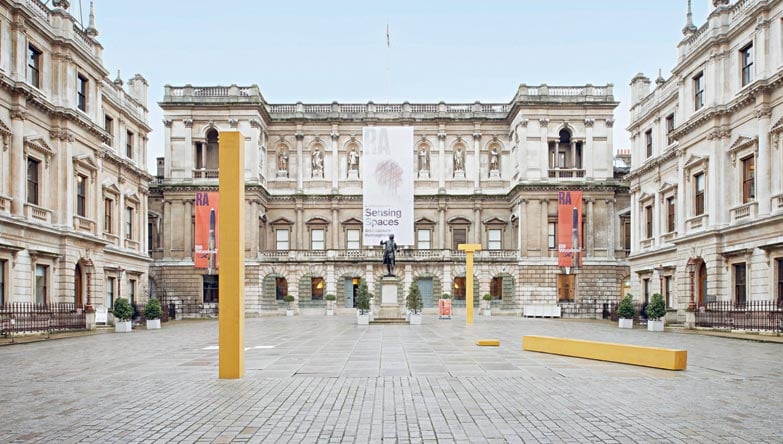 Occasional, at big architecture events, one finds oneself in the embarrassing situation of seeing architects who disguise themselves as artists, with results that objectively make a leap – backwards – with respect to the freedom artistic expressions afford themselves.

But this is not the case in the exhibition “Sensing Space: Architecture Reimagined” organized in the prestigious rooms of the Royal Academy in London, curated by the young Kate Goodwin, where seven installations balanced between architecture and sculpture manage to activate real dialogue with the host spaces and engage visitors on an emotional plane. As Charles Saumarez Smith, chief executive of the Academy, explains: “the Royal Academy also represents architecture, not just painting and sculpture. We wanted to celebrate this, but to look at the architecture of the future, not the past, and above all a type of architecture that does not simply solve problems, but offers new and unpredictable experiences.” Hence the idea of inviting seven international architects to design a space to be visited, rather than a show of models and drawings of their constructions, providing an on-site example of their approaches for the public. The curator says: “I have intentionally invited architects from different parts of the world, different generations and sensibilities, all with extensive experience in the field of construction. The goal was to make the visit experience physical, tangible, sensory, but also to convey an idea of the great poetry of architecture, which is the omnipresent backdrop of our lives, which we often fail to fully notice.” In effect, the poetic reassessment of architectural design can be strongly sensed in the itinerary through the works in the show, underscoring the fact that even today architecture is not a discipline of a primarily ‘functional’ character, but one rich in values connected to humanistic culture in the broader sense, where the poetic value of expression – ‘constructed’ in this case – appears to be the guiding factor. The architects involved are Grafton Architects (Ireland), Diébédo Francis Kéré (Germany/Burkina Faso), Kengo Kuma (Japan), Li Xiaodong (China), Pezo Von Ellrichshausen (Chile), Edoardo Souto de Moura and Álvaro Siza (Portugal). They were all asked to make temporary installations dictated by free exploration of the basic elements of architecture, a series of spaces conveying tactile, aural and olfactory experiences. The various installations offer viewers a chance to understand how beyond the architectural figure, sound and memory, odors and surfaces influence our personal perceptions of space. The show began in the courtyard of the Academy, where Álvaro Siza arranged laconic stylized architectural elements in yellow, gathered like fragments of a non-existent architecture between the classical buildings of the setting. Eduardo Souto de Moura worked on the old wooden arches of the Academy, doubled by castings in cement left partially open, like allusive entrance gates. Inside, in the large hall with gilded stucco work and a glass ceiling, the imposing monumental structure in wood by Pezo Von Ellrichshausen, with a suspended space supported by four mute cylinders, eloquently concluded the internal perspective, offering an unusual raised vantage point for visitors. Kengo Kuma was inspired by the kodo– the Japanese incense ceremony – contributing an ethereal room of floating, scented and lit bamboo, hovering in darkness. A series of mystemysterious labyrinthine passages and corridors, paced by walls composed of slender tree branches (22,000 pieces), bathed by lights built into the floor, were seen in the fascinating work by Li Xiaodong. Grafton Architects came up with a suspended installation that revised the ceiling and the use of light in one of the rooms. A new tectonics of interior space, composed of an excavated volume of exposed concrete, compressed the space, capturing zenithal light in an almost pictorial way from openings made to underline the geometry of the surfaces. A sort of contamination between an igloo dissected on its middle axis and a Gothic cathedral arch on a smaller scale, built with panels of honeycomb polypropylene, formed the space invented by the African architect Diébédo Francis Kéré, welcoming visitors who were encouraged to transform the architectural skin of the structure by inserting colored straws. Sensing Spaces, with its “reimagined” architectural installations, was an opportunity, beyond the spectacular impact, to reflect on architecture as a multisensorial experience, where human beings are the central focus of the project, as they utilize space with the body and the mind.