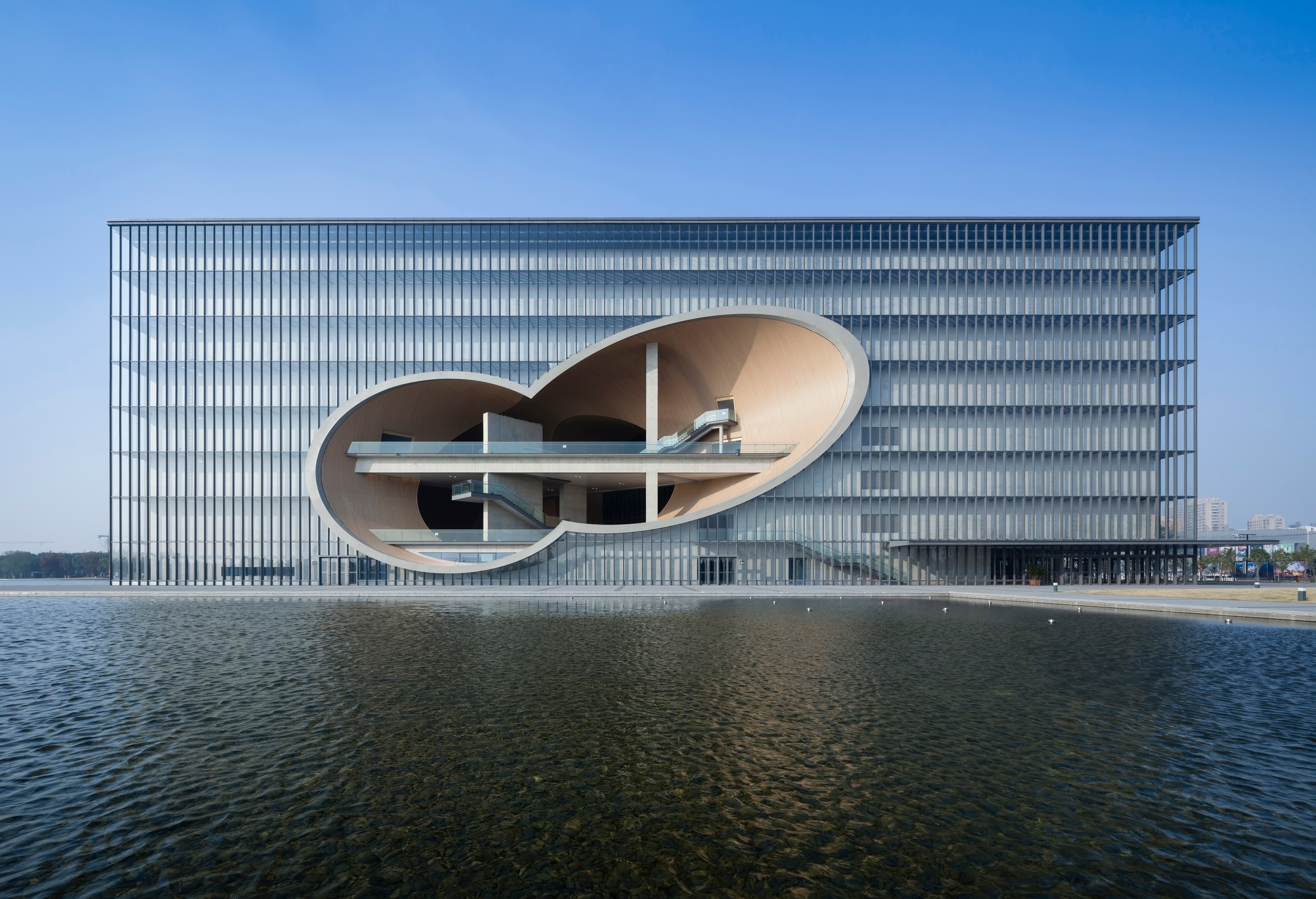 Now past seventy, Tadao Ando hasn’t stopped astonishing the worldwide architecture scene with large-scale projects that underline their position in a lifelong research process, yet are never repetitive, reflecting a language that has never become a cliché.

Every work by Ando reveals a passion for architectural composition that moves towards new expressions of experimentation capable of combining formal abstraction with the art of building, the form and sizing of spaces, the idea of architecture for the city.

This project for the new town of Jiading, near Shanghai, the Poly Grand Theater with its multifunctional tower and shopping center (both still under construction), is also a landmark, a sort of new civic and cultural center (a new library has also been built in the vicinity), ready to take on values that transcend the mere functional character to also become a building with a ‘symbolic’ character.

The Poly Grand Theater takes its name from the famous auction house China Poly Group – a true protagonist of the recent expansion of the market for Chinese art – which commissioned the project, and manages 39 theater complexes in China, all conceived – like the one in Jaiding – as ‘attractions’ that combine architecture and culture in new urban zones.

For the Poly Grand Theater Ando has worked on a regular parallelepiped with a square plan of 110 meters per side, by a height of 39, marked by a skin in aluminium and glass that forms a regular vertical grid, set over the exposed reinforced concrete structure. The monolith is perforated from the inside by a series of cylindrical elements of different sizes, placed at different angles to cause explosive architectural cores that are connected to each other.

The carefully balanced connections transform them into spaces of great breadth projecting outward to form large openings of a sculptural character on the facades, corresponding to figures generated by the geometric intersection between the cylinders of the internal tunnels and the vertical surfaces of the facades.

The lucid process of compositional montage of the spatial sequence of the interiors destroys, in a certain sense, the rigid geometry of the architectural enclosure that contains it, offering visitors an itinerary of spaces to be discovered, projected towards the reflecting pool that borders two sides of the theater, and towards the new urban landscape.

Two horizontal tunnels form an X and emerge on the main facade, facing the reflecting pool, to define the entrance as a depressed arch, while on the lateral facade the large opening obtained by the geometric cut of the cylinders corresponds to their meeting with the vertical architectural skin.

A view opens up of the interior with the suspended routes of crossing inside the tunnels clad in strips of wood-color aluminium. On the other two sides towards the city other large openings are created by the back tunnels, which while creating the overall figure of the theater open spaces and routes towards the surrounding landscape, underscoring the public function of the building.

In this lyrical, monumental and ‘porous’ work of architecture what remains hidden, protected in a precious shell, is the theater itself, with 1600 seats; here the theme of the cylinder is interpreted in the treatment of the walls, with overhanging balconies: a complex pattern of horizontal wooden slats of differing depth to create a warm, enveloping environment, with excellent acoustics for performances and concerts.