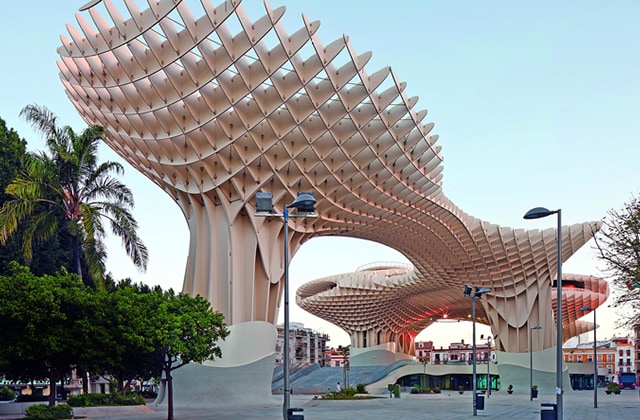 While it is possible to see the winning project in the international competition held by the administration of the Andalusian capital in 1994, by the German architect Jürgen Mayer H., as a successful attempt to make a striking architectural gesture for sure-fire success with its audience, capable of seducing visitors like a new urban attraction, along the lines of the Bilbao Guggenheim and the MAXXI in Rome, actually the intervention in this crucial spot in the city contains indications of great interest that move in different directions.

The idea of creating shade in the public spaces of Mediterranean cities has been interpreted in different ways. In Barcelona, in 1883, at the Parc de la Ciutadella, the architect Josep Fontseré i Mestre constructed a building that summed this idea up perfectly with its name: the Umbracle. A monumental pavilion contained by two richly crafted brick facades, with a vaulted roof composed of parallel metal strips to create shade and ventilation for the space below. Mayer’s project shifts the concept to a larger scale, generating an urban landmark that restores the space to the city and redesigns the plaza – occupied until a short time ago by a parking lot – while offering new public functions in the shade of a large structure in wood and steel, engineered by the Arup studio, that marks the various paths and new activities. Six large mushroom-shaped elements rise on the square with cylindrical trunks, featuring an initial band of concrete connected to the pavement, which contains the lamellar supports. Growing upward and expanding like overturned umbrellas, the big mushrooms are connected at a height of about thirty meters from street level. Here, on the roof, a restaurant and a sinuous panoramic walkway remind us of the work of Gaudí on the warrior-chimneys of the roof of La Pedrera in Barcelona. The imposing porous structure created by Mayer, like a secular cathedral, offers protection from bright summer sunlight while reviving the dimension of public space of the historic plaza, which new becomes a possible new urban center, in an intense relationship between contemporary gesture and historical fabric. A dialogue also rooted in the ground, where the colossal circular pillars, equipped with rest rooms and elevators inside, do not interfere with the Roman ruins discovered in earlier excavation work. The formation of the new Museum Antiquarium allows visitors to observe the vestiges of Roman times. The Museum has been designed by the architect Felipe Palomino to bring out the sequence, in a unified space with seven windows, of the archaeological episodes, connected in a single itinerary. The area of the dig is contained by the continuous full-height glass screen, enlivened by beams of colored light from a corresponding cut in the ceiling, to underscore the separation between the museum and the zones occupied by the structural parts of the construction above it. The Metropol Parasol thus links back to the memory of the cathedral of the city and its internal vaults, but also to that of the age-old trees of the nearby Plaza de Cristo de Burgos; stimuli joined in a volumetric and compositional synthesis, a large extroverted work of architecture, without vertical closure, totally open to the use of citizens and tourists. Besides the underground archaeological museum, in the raised zone of the plaza a covered municipal market has been made, together with a shopping mall. On their flat roofing a platform will be made for outdoor concerts, as well as a space for cultural exhibitions and events.