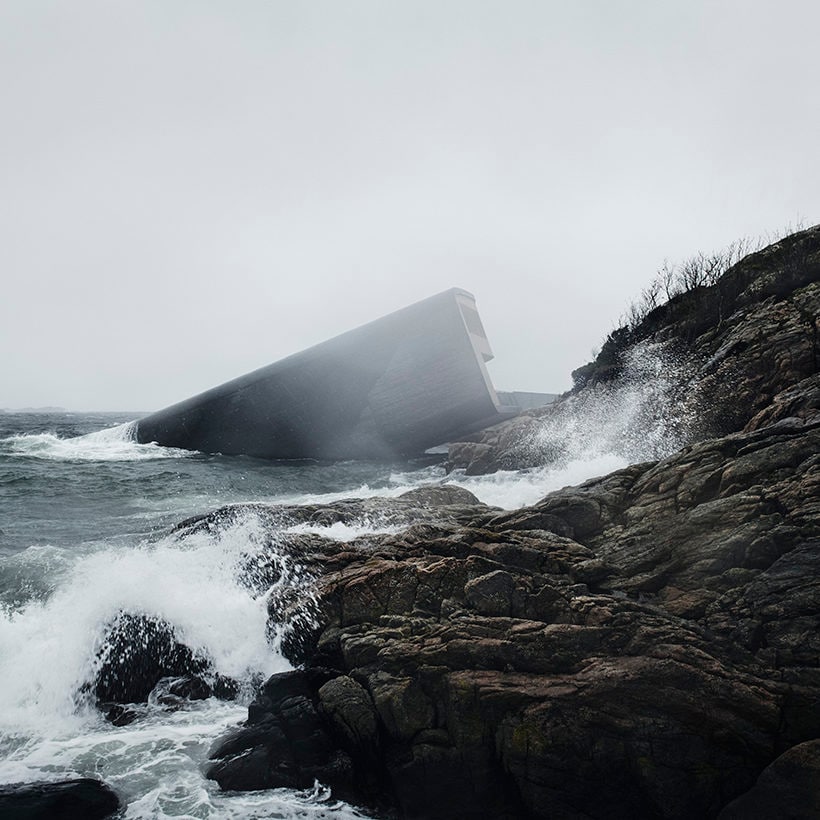 #architecture
Snøhetta: tableau vivant
Under, the first partially underwater restaurant in Europe, designed by the firm Snøhetta in the North Sea, in Norway. An immediate icon, because its spectacular architecture suggests a new way of approaching the relationship with our environmental surroundings

“Going down, in the most remote position, most in contact with nature, Under is an evolution of our experimentation on the concept of the borderline and the barrier, not in a high-tech perspective, but in human terms,” says Kjetil Trædal Thorsen, founder of Snøhetta.

The studio that after having designed works like the Bibliotheca Alexandrina in Alexandria, Egypt (World Architecture Award) and the Norwegian National Opera and Ballet, how offers Norway (and the clients, the brothers Stig and Gaute Ubostad) an evocative architectural ‘folly’: the first partially underwater restaurant in Europe, halfway between a periscope and a sort of shipwreck partially ‘swallowed’ by the waters.

°
Snøhetta began as a collaborative architectural and landscape workshop, and has remained true to its trans-disciplinary way of thinking since its inception. Our work strives to enhance our sense of surroundings, identity and relationship to others and the physical spaces we inhabit, whether feral or human-made. Museums, products, reindeer observatories, graphics, landscapes and dollhouses get the same care and attention to purpose.

A window on the seabed at the extremity of the Norwegian south coast, at Lindesnes, in a rugged natural context where the silence is interrupted only by thunder and the atmospheric phenomena of a climate that can suddenly change multiple times during the course of one day.

Under, which in Norwegian means ‘below’ but also ‘wonder’ (a perfect name) is enclosed in a reinforced concrete monolith with a length of 34 meters, inclined by 20 degrees, that ‘rests’ on the rocky shore, entering the water and plunging to a depth of five meters, anchoring to the seabed.

A tubular shell, half a meter thick, built to stand up to the water pressure and the particular environmental conditions, and conceived to fit into the landscape in the most natural possible way. The rugged outer surfaces will be colonized, over time, by algae, mussels and barnacles, the inhabitants of this place.

The entrance for humans is on dry land, at the other extremity, where the monolith has a softer exterior in Norwegian oak, which in time will take on a grayish tone, similar to the concrete. Along a custom concrete walkway visitors reach the interior, 600 square meters orchestrated on three descending levels.

The path starts from level ‘zero’ with the reception area and cloakroom clad in raw wood, and then reaches a un mezzanine with a bar and cocktail room, partially overlooking the lower level which contains the restaurant and an immersive spectacle that is new on each and every evening: a panoramic glazing, eleven meters wide, made with a double layer of acrylic glass, allows the 40 guests to dine with a view of the marine environment, observing its life and its changes over the seasons. 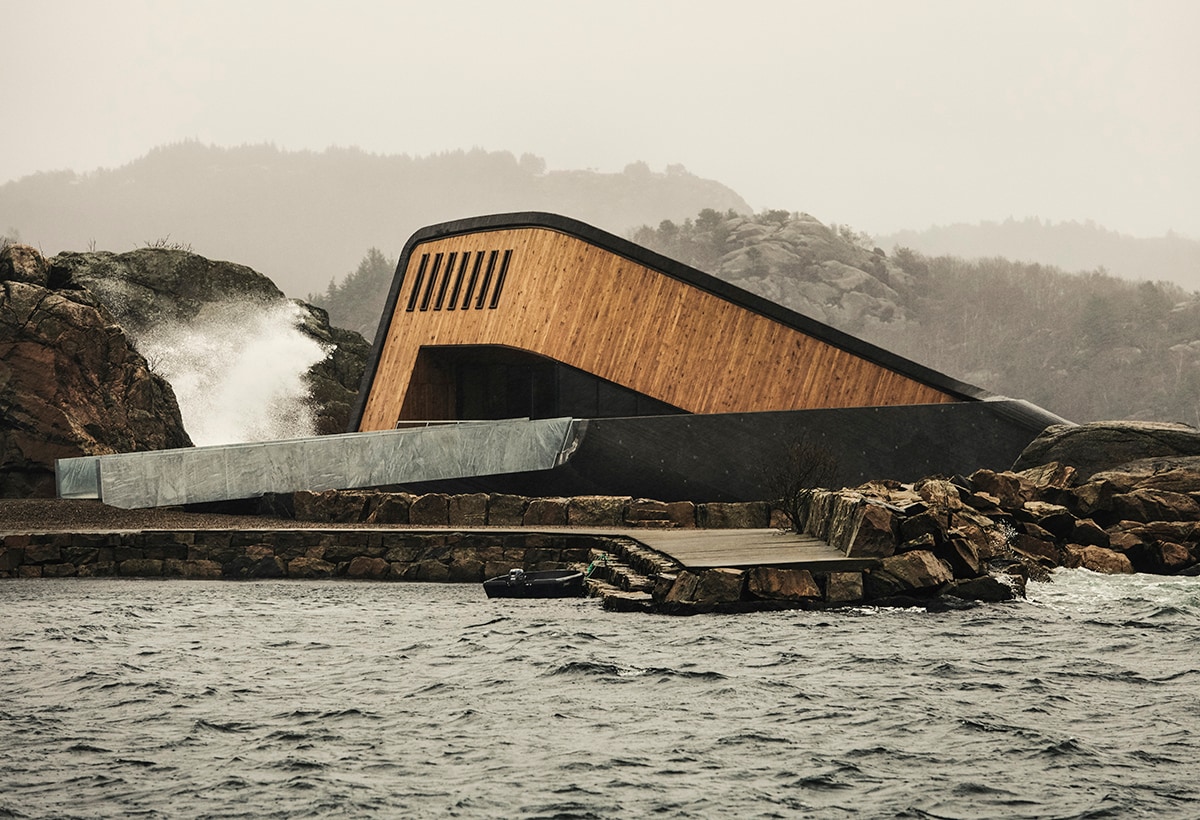 11
The colors of Under suggest the natural hues of the rocks and the Norwegian oak used for the facings.

The experience is one of spatial and temporal disorientation that urges reflection on “new perspectives and ways of seeing the world, both above and below water level” (Kjetil Trædal Thorsen).

A gaze into the distance, then, which in the vision of the international studio Snøhetta means seeking a new relationship with the environment, nature and the world around us. In short, with our life and our future.

At Lindesnes this meant proposing a sustainable model of responsible consumption, a crucial theme for the 21st century. But how? First of all by lighting the landscape outside Under with a system of lamps installed on the seabed, developed with iGuzzini, capable of ensuring the flourishing growth of marine flora, which will attract various species of fish and mollusks to the sandy surface.

Then by installing, with the help of experts from the Norwegian Institute of Bioeconomy Research, a series of video cameras and measurement tools created for the occasion, which make it possible to transform the restaurant into an observatory from which to monitor and study the local ecosystem, protecting its resources. 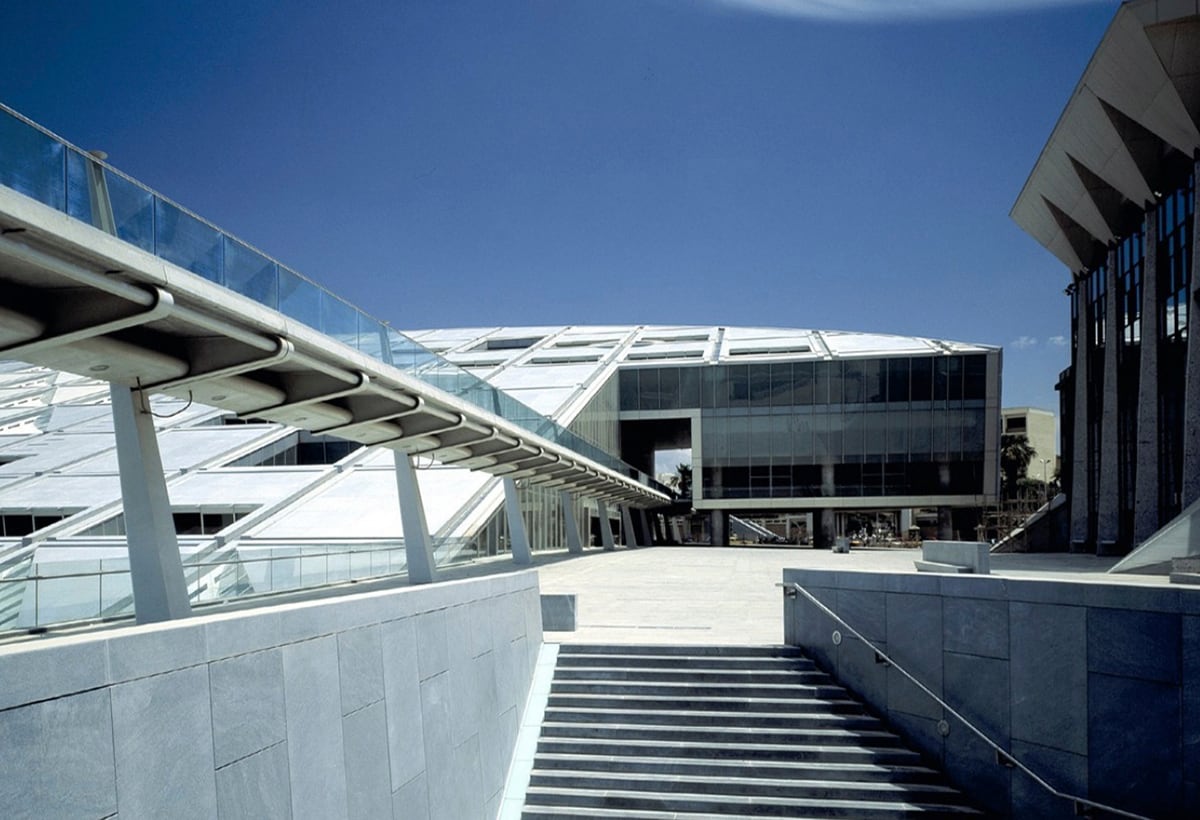 2
In the gallery, two iconic projects by the Snøhetta studio. The Bibliotheca Alexandrina (Alessandria, Egypt) is built on a magnificent site alongside Alexandria's ancient harbor in the historic center of the city. The 11-story library can contain up to 4 million volumes of books, and can be expanded up to 8 million by the use of compact storage. In addition to the library facilities, the library also contains other cultural and educational functions including a planetarium, several museums, a school for information science, and conservation facilities. Characterized by its circular, tilting form, the building spans 160 meters in diameter and reaches up to 32 meters in height, while also diving some 12 meters into the ground. An open plaza and reflecting pool surrounds the building, and a footbridge links the city to the nearby University of Alexandria.

The architectural object has preserved the context in which it is inserted, also in the implementation phase. The construction began on a barge, where prefabricated parts were transported from dry land and assembled at the site. Once completed, the structure (with its casements) was immersed in the water and then allowed to sink in a controlled way.

After it was anchored to the seabed (with a concrete slab), the water was drained in order to complete the work on the interiors. Inspired by the natural beauty of the landscape, the spaces present a refined roughness, with a handmade tone.

The range of materials and colors focused on raw concrete combined with oak and sound-absorbing acoustic panels covered with fabrics in intense hues, from coral pink (on the entrance level) to emerald green (for the mezzanine) all the way to a sapphire blue for the restaurant dining room, where the punctuation of 380 LED lamps shapes the chromatic impact.

The sophisticated technical lighting system has been designed to reduce effects of reflection to a minimum on the panoramic window, which is cleaned twice a week to remove algae and limpets, optimizing the view of the marine landscape.

“
The experience is one of spatial and temporal disorientation that urges reflection on new perspectives and ways of seeing the world, both above and below water level."

In collaboration with a local woodworking shop, the architects have designed all the furnishings and lined parts of the enclosure, walls and floors, with Norwegian oak. The chairs, in particular, have terse, continuous forms and rounded corners, imitating the growth of the branches of a tree.

They too reflect the project philosophy, expressing a metaphor of the contrasts of life: soft or rigid, land or sea, under and over, solid or liquid… always a question of delicate balance.