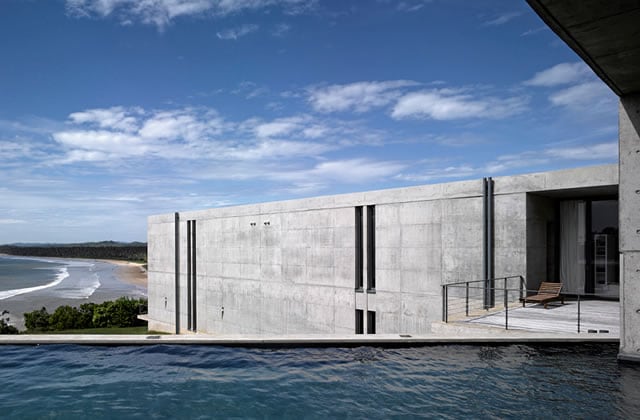 These houses look extraordinary, immersed in tropical vegetation, built on a rocky promontory.

Both are in the southern part of the island.

They overlook the Indian Ocean and the bay of Weligama with its beaches. In a landscape of palm trees and wild foliage, they are like powerful monoliths, made lighter by basic, long, narrow geometric design. They have a dynamic indoor-outdoor relationship, and are flooded with light that seems to sculpt the spaces. We are in the most authentic context of local architecture. Here in Mirissa stands the Pradeep Jayewardene house built in 1997 by Geoffrey Bawa (1919-2003), an internationally acclaimed local architect (author of the exemplary Kandalama Hotel in Dambulla,1991-94). Few people have managed to interpret the genius loci of tropical urbane houses as well as Bawa, achieving a harmonious fusion between local constructive traditions and updated vocabulary (synthesis of vernacular styles, forms of modernity, suitable responses to the climate), and he has effectively indicated the basic matrices of local contemporary architecture: the roof (protective, emphatic), the floor, the scheme of sheltered porches, the intermediate indoor-outdoor spaces, open and semi-open courtyards. The two houses by the masters of Japanese architecture Tadao Ando and Shigeru Ban are not exceptions to these rules, though they tend to restrain the exuberant nature of the place with Japanese rigor. Some people manage to make their dreams come true: to buy a piece of land and build their ideal house on it. “My family left Italy and moved to the island of Sri Lanka five years ago”, says Jacob Pringiers, a designer and entrepreneur born in Gant in 1970. A true globetrotter, after training in Italy, Switzerland and California, in 1996 he opened a design studio in Milan together with Luca Casini, working with companies like Luxottica, Colgate Palmolive, Wmf, Nike, Riva, Asa-Selection, Sessa Marine. Since 2002, with his own studio in the city, he took on new clients and projects (from BRF to Desalto, Durlet to Elica and DePadova, www.jacobpringiers.com). “But the sea remains my main passion, so I never forgot the island of Sri Lanka where I lived for nine years as a child. In 1981 my father opened an industrial tire manufacturer here, near the bay of Weligama, where he also purchased some land with the idea of building a new house. My brother works with him and followed suit. My sister is still in Brussels, where she works with DNA Lab. The catastrophic event of the tsunami, caused by the earthquake in Sumatra in 2004, disrupted everything and put an end to their projects. But from the ashes something is reborn. After the tsunami, with a philanthropic spirit my father founded BAFF (Building a Future Foundation), providing concrete help for many families: by building 750 houses, opening training centers for new jobs (like the repair of fishing boats), offering people a chance to rethink their lives. Three years ago, with a partner, he got involved in a project of development and construction of avant-garde boats. The result was Barramundi Boatyard, which uses the most advanced production technologies to launch catamarans of over 14 meters, capable of sailing oceans and going around the world”. In parallel, in 2006 the project of Tadao Ando began for the home-atelier of Jacob’s parents, the businessman Pierre Pringiers and his artist wife Saskia Pintelon. One year later came the work on the brother’s house, Koenraad Pringiers who chose Shigeru Ban to design it. Jacob did his share: to work on the interior design of the houses by Ando and Ban, he moved to Sri Lanka with his children and wife, Eveline Patteeuw, a familiar name on the Milan fashion scene. In the capital city of Colombo he opened a new studio and together with Nick Top (owner of Top Mouton in Belgium) he founded Stem Lanka. “My family”, he continues, “had already had a chance to appreciate the essential style, high precision, refined materials and finishes of Top Mouton, which had furnished their homes in Belgium and at Port-Grimaud in France, and marketed the furnishings designed by the late Maarten van Severen (Antwerp, 1956 – Gand, 2005) in Europe”. The interiors of the architecture by Ando were designed by Top Mouton and made in Sri Lanka by Stem Lanka. Jacob, together with about 30 specialized workers, supervised the development and production of the high-quality furnishings. Then, in 2007, he worked on the production of the furnishings designed by Shigeru Ban for his brother’s house, and personally designed pieces produced by Stem Lanka. The next year, still in partnership with Nick Top, the new Aiki brand was formed “with the objective of offering the market furnishings of good design, but at more affordable prices, made in the facilities of Stem Lanka”.