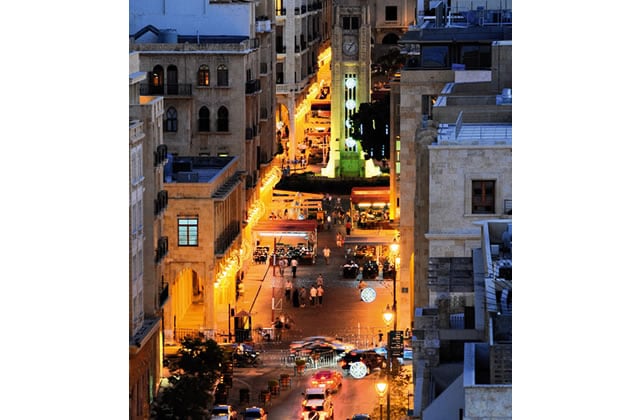 In Beirut, two exceptional new spaces for the culture of food, created by Moatti-Rivière with the award-winning French chef Yannick Alléno. “S.T.A.Y.” (Simple Table Alléno Yannick), playing with the meaning of the word, expresses the culinary philosophy of the chef, organized in a tearoom and a bar-restaurant in the new Souks complex by Rafael Moneo.
A contemporary interior design project of great elegance, inserted in the reconstruction of a city scarred by war, whose urban center is now a laboratory of architecture on an international scale.

The reconstruction of Beirut began seventeen years ago, and is gradually taking on form and meaning, though certain ‘phantom structures’ still remain, damaged by the bullets and bombs of a not so distant past, reminders of a war fought right here, in this part of the city.

The renewal project of the city center, managed by the private company Solidere, in spite of the controversy regarding modes of control of the project, represents a model of reference for the Mediterranean area, in which the recovery of historical buildings is mixed with contemporary architectural culture, involving international designers in the creation of entire city pieces, not as self-referential isolated icons, but as works that are part of an overall orchestration. Works by Jean Nouvel, Zaha Hadid, Norman Foster, the new waterfront promenade with Yacht Club recently completed by Steven Holl, are just some of the projects in this program. Another one is the vast pedestrian shopping district of the Souks, which combines a detailed contemporary image outlined by Rafael Moneo with a series of nearby restorations of historic buildings, in keeping with the program of integration between modern architecture, traditional architecture and the context, with a mixture of activities that avoids the concept of zoning developed in modernist urban planning, opting instead for a variety of functions that reflects the complexity of the historical city. The practice of invitational competitions has been applied in this careful planning operation to achieve high levels of design quality and to take the ‘Beirut model’ of Solidere beyond the confines of Lebanon, into other neighboring Middle Eastern countries. The two projects published here apply the standards of quality and overall orchestration implemented by Solidere to create exceptional places devoted to the culture of food, calling on an architect and a great chef to collaborate on the idea of the space and the gastronomic/ culinary program. Alain Moatti and the chef Yannick Alléno convinced and charmed the jury with their proposal, positioning two facilities in front of the entrance to the Souks: Sweet Tea, Alléno’s first tearoom, and S.T.A.Y., the large restaurant-bar on the completely transformed first level of an office building. The tea room has two floors, an architectural bonbonnière that adapts to the character of a contemporary pastry shop, enriched by a very fresh range of colors in translucent glass, custom seating and a surprising ‘secret garden’ on the first floor, invented by opening a space to create a sort of green room open to the sky, with the walls transformed into fixed wings covered with plants. The ‘vertical garden’ frames the sky, offering a suspended segment of twinkling stars. In the daytime, when the sunlight is too strong, the stars are repeated on a sliding awning, together with the moon and the sun. The architectural setting is in perfect tune with the delicacies created by Alléno, which in the entrance zone become part of the architecture that contains them, and in the garden-room reinvent the theme of the déjeuner sur l’herbe. S.T.A.Y. is organized in a larger space, creating two levels by freeing up one entire floor to contain a suspended figure in a sort of compositional interlock that plays with the idea of architecture inside architecture. In the resulting enclosure, made monochromatic and welcoming thanks to custom furnishings and the choice of a silver gray tone that is neutral and precious at the same time, a sort of long vessel has been inserted, suspended on three horizontal beams that remain to set the rhythm of the unified space facing a conclusive terrace and a long lateral balcony. The purple ship is a tribute to the ancient history of Lebanon, the expert Phoenician navigators, who were the merchants and inventors of this sensual hue. The outer hull of this imaginary ship, symbol and icon of the restaurant, has been made with a plastic material used for real boats, offering a smooth, reflecting surface that creates different shadings from day to night. In the dining room there are different seating solutions, including a long table (Table de Partage) conceived as a place for meeting other people and socializing, flanked by six large round tables with divans that form islands, and a more traditional zone with tables that can be combined in different ways. Beside the entrance on the first floor, reached by means of two elevators from the street-level foyer, a blue staircase leads into the suspended ship, which contains a bar in the same color, projected downward, underlining the figure of the hull and the perspective of the overall space. For Alain Moatti, “the mouth should taste, but it must also know how to kiss”; from this viewpoint, a restaurant is not connected only with the pleasures of food, but also with the symbolic value that space that welcomes us is able to transmit. A satisfaction of ‘taste’ that Sweet Tea and S.T.A.Y. seem to extend to all five senses, making beauty return as the main reference point of life.