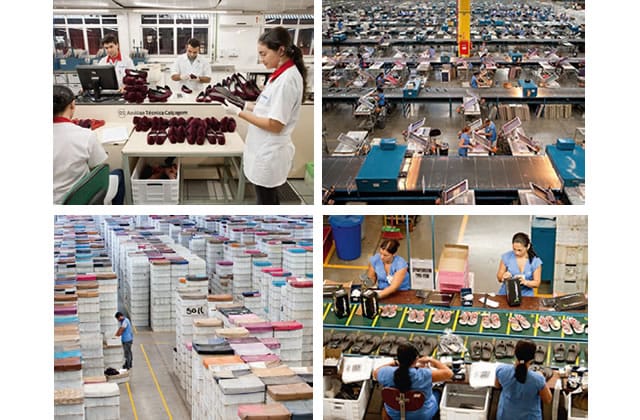 The story of Grendene and its production of plastic footwear is closely linked to the history of the family from Vicenza that reached Farroupilha, in Brazil, at the start of the 1970s. Now, after various cycles, they are getting ready to approach the challenge of sustainability.

When we talk about Brazil we often think of a compact country, gathered around big stereotypes that make the place appealing all over the world: the beaches of Rio, the rainbow mixture of races that has produced Carnival, Samba, Bossa Nova.

More refined observers also know about Candomblé, or the novels of Amado. But the reality is obviously more complex: Brazil has the variety and scope of an entire continent. Few people, for example, know about the deep South, which corresponds to a socio-cultural stratification linked to German culture and, where Italy is concerned, to Venetian communities that came here in the period of the second wave of immigration, after the desperate, more impoverished migration of the early 1900s, that reached New York and Buenos Aires. An Italy that was already productive and industrious, that in the 1960s and 1970s, from the tanneries of Valle di Chiampo, near Vicenza, set off for similar but more open territories, looking for a bigger future than Italy seemed able to offer. So we reach Farroupilha, about 100 km west of Porto Alegre, a landscape of foggy hills not so different from the Colli Berici of Vicenza, the former home of the Grendene family which in a few decades, starting in 1971, created first a packaging factory, then moved toward the production of plastic accessories, which involved the designing of dies and moulds, leading to the creation of new product families and typologies. Once again, we can observe the virtuous relationship between the craftsman’s passion for a unique, well-made product and production with industrial machinery that is equally unique and innovative, permitting the creation of products in plastic, in pursuit of the utopia of a radical modernization of the country through the magic of a material that speaks of the future. In the 1980s Grendene made another innovative leap forward – always guided by applied creativity – making it the most advanced factory of ‘injected’ footwear in the world: for the first time, plastic was used to produce monomateric footwear. Its features of functional quality, hygiene and easy cleaning soon made it an irresistible market success – sustained by an unbeatable price-quality ratio – in a period difficult transition of Brazil from an underdeveloped nation governed by a military regime to an emerging country capable of constructing its future with its own extraordinary natural and human resources. It is here that design thinking – at the start of the new millennium – supplies material and knowledge for this final leap, an innovative feat of athletic prowess that now takes the form of the regeneration and worldwide success of the Grendene Group. In particular, the company is thriving on the success of Melissa, a brand guided by Edson Matsuo – an enlightened designer who for more than a decade has been at the helm of the R+D division of Grendene, and directs its in-house design center – that has literally revolutionized the idea of plastic footwear as a mere low-cost product for everyday use. Melissa, in fact, like Alessi in Italy at the end of the 1980s, has launched an unlimited series of collaborations with Brazilian and international designers (from the Campana brothers to Zaha Hadid), to create, produce and sell a highly innovative family of footwear products, starting with the plastic matrix to experiment with forms, structures, colors and even odors (the Melissa collection, in fact, has a unique smell that has become a sort of trademark), corresponding to the tenets of Quick & Deep, of creative quality in the everyday dimension, of spontaneous personalization of dress through the use of accessories. This entire creative and productive effort has been on display for a decade in the first concept store born in Brazil, on the street of fashion and innovation, Rua Oscar Freire in São Paulo: Galleria Melissa. But the story doesn’t end here. It even seems to be headed for a new beginning. The latest challenge faced by the company, with great expenditure of resources and research, has to do with a third passage, after those of productive innovation and design thinking: the challenge of sustainability. In the case of Grendene and its brands (besides Melissa, the front line brand on the women’s market, and Ipanema, which with the collaboration of Osklen has found a new path for the creation and production of flip-flops with a strong Rio character, we should also mention Rider, Grendha, Ilhabela and Grendene Kids) sustainability corresponds to the entire life cycle of products, most of which are made with just one material. Along the lines of the new Crucial & Correct paradigm, the story of Grendene and its plastic jelly footwear seems to be renewing its message, first in Brazil and then in the world. – Caption pag. 111 Moments of production in the Grendene plant at Farroupilha, in Southern Brazil. This is the world’s most advanced factory for the ‘injection’ production of plastic footwear.