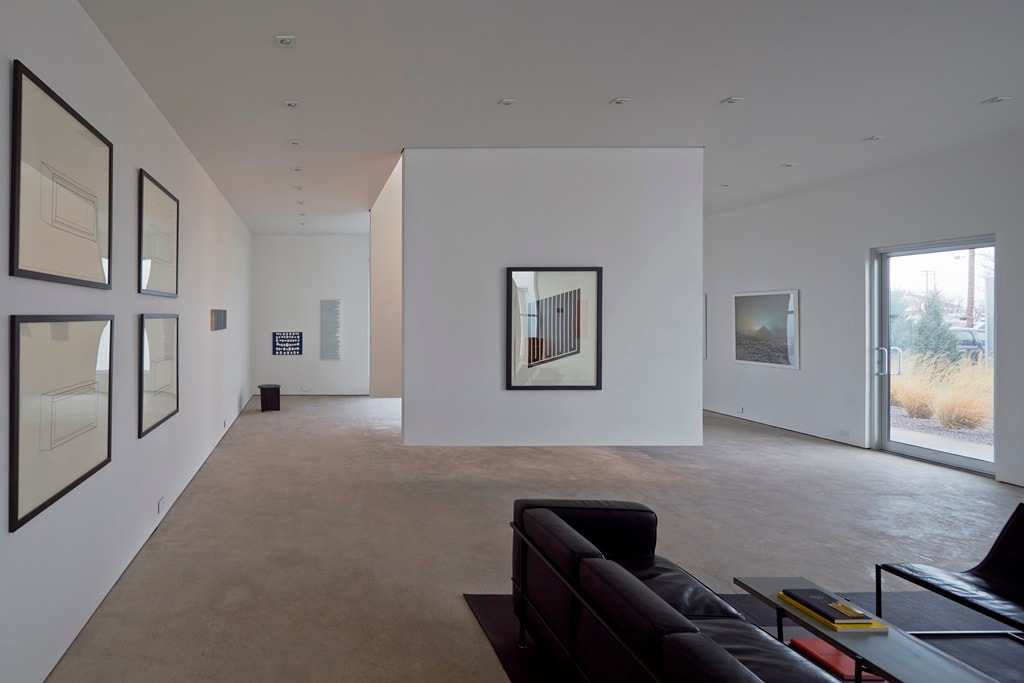 Marfa, a small remote town in Western Texas, gained its reputation as a mecca for minimalism when artist Donald Judd settled down there in the 70’s. Even though the demography has changed somewhat since with fewer ranchers and more art dealers and people catering for the needs of the hords of tourists that now descend on the town following in the footsteps of their minimalist art heroes, Marfa has retained its small town character.

The Inde/Jacobs gallery, designed by Swedish architects Claesson Koivisto Rune is not going to change that but the building is one of very few contemporary additions to the architecture in the city. It is also a building that would not have come into being hadn’t it been for the passion for minimalist art in general and Judd in particular that the architects share with their clients. The history of the gallery building that just opened it’s doors goes back ten years to when the architects, quite by chance, met the proprietors of the Inde/Jacobs who had just opened a makeshift gallery in an old auto repari shop.

We’re all familiar with one of the main characteristics of small town America: the house with the front porch that sits on a narrow lot. Oriented towards the public life of the street, behind is a back yard that ends in an alley. Marfa is no exception to this rule, but it’s a building tradition the architects of the Inde/Jacobs gallery decided to make a bold and deliberate break with.

The gallery presents its end to the street, reserving half of the lot to a yard that stretches the entire length of the building, you enter from the long side and the long facade hides the courtyard that separates the gallery from a private house. Turning the building perpendicular to the street is one of the two defining features of the project. The other is the perspective.

Architecture is the slowest of the arts with projects always taking a few years to materialize. This building has taken ten years to complete and the real question with time and architecture is what it does for a project. One could argue that time is the ultimate test of ideas, the only way to see which ones will hold and which ones won’t. Many projects might be too weighed down by the spirit of its time, concepts or features that, when ten years have passed, have simply been outdated, making us relieved that they never went past the sketch-on-a-napkin phase.

What’s striking with the building Claesson Koivisto Rune has designed for the Inde/Jacobs gallery is that if you look at early sketches, the concept they presented to their clients in January 2006 is very close to the finished building. In fact, you would have to look very closely to see how this project has been altered. Nothing much has changed. The ten years that have passed have given the architects the possibiltiy to fine-tune their concept. It’s minor details, windows have changed and what is now the residence for the gallery owners was initially an artist in residency.

The main features of the architectural concept have remained, passed the test of time. The concept of the project can be described in one word – perspective. Heavily inspired by the west-texan landscape with its flatness and seemingly endless vistas, the architects transferred what they felt were the main characteristic of the context to the building/architecture.

The enhanced, or forced, perspective – that two degree angle of the freestanding wall that define the courtyard and the slant of the roof of the same angle both serve the same purpose: stretching the building, making it seem longer. No functional purpose can be found for this, instead it could be perceived as an hommage to Marfa ifself and the minimalist art that both the architects and their clients admire and love so much. It is a way of achieving an effect, a way of raising the artistic bar by subtle means.

Marfa is the right context for an architecture with such aspirations. Subtle architectural tricks aside, this is a building with a purpose: showing art. Inde/Jacobs is a gallery specialised in artists working in the tradition of Donald Judd, the other great minimalists and the Chinati artists.

The gallery is one large space with a storage room and a counter piece skylight to define smaller spaces within the room. The three walls around the skylight do not touch the floor, the walls around the storage don’t reach the ceiling. For the architects this is a way of allowing spatiality to flow freely while allowing for enough wall space and variations in room size to meet all the demands an art gallery might have.

In the 70’s minimalist artist Donald Judd (1928–1994) settled in Marfa, Texas where he bought some twenty buildings, including the brick building (facing page, top left) that housed his architecture office.
The Inde/Jacobs gallery is situated on San Antonio Street, a highway that goes through Marfa. The idea of the building is to accentuate perspective. To that end the doors and windows along the entrance facade have each been progressively reduced in size, getting smaller the further they are from the street.
An internal passage, foreground, copper chair by Donald Judd,1984; work-art on the left wall by Cecilia Vissers and on the right by Hadi Tabatabai.
The forced perspective of the building with the wall on the left which is angled inwards in plan.
The courtyard that separates the gallery from the private residence, with the sculpture Schneewittchen, in the centre, by Pard Morrison, 2013.
View of a living area.
Plan of the gallery/residence.
Coffee table by David design, carpet in vegetable-tanned leather by Ogeborg, all design Claesson Koivisto Rune for their Marfa collection.
Residence living room with courtyard to the right. Stool by Claesson Koivisto Rune for Nikari, dining table LC6 by Le Corbusier (1928) for Cassina and chairs by Massimo Vignelli for Knoll International (1985).
Vilis Inde and his dog Kriksis with courtyard in the background and stones collected in the Chihuahuan desert outside Marfa. On right side of the wall, an art-work by Jarod Beck.
The gallery space is defined by two volumes – the one to the left (with light reflection from above) floats down from the ceiling without touching the floor, the one to the right rises from the floor but does not reach the ceiling. Inside the hanging cube, in the center of the space, art works by David Hirschi.
#Design #Projects