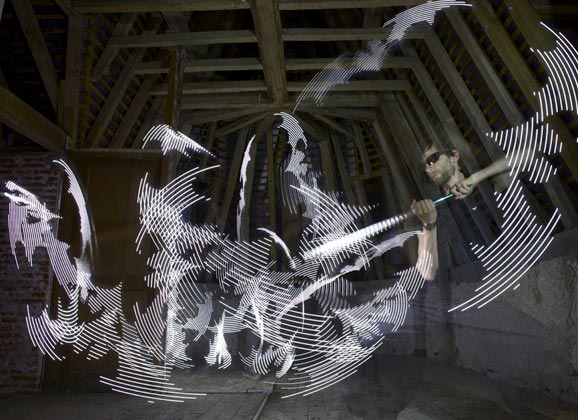 This young designer from Halle, a city based in the last century on the pace and customs of East Germany, certainly doesn’t look his age of 39.

“I can still remember that atmosphere,” Moritz Waldemeyer says, speaking very good Italian. “If you have ever seen a cult film from a few years ago, Good Bye Lenin, you can understand: life was hard, we were aware of being ‘the others,’ stuck in the 1950s.” At the time, he rode around on a scooter, pure DDR style: “Sometimes it worked, sometimes it didn’t. I would get very angry.” An angry young man with a certainty: that he would get away from that place as soon as possible. “We felt like prisoners, and I couldn’t wait to see other places: the most urgent thing was to travel.” 1989: the Wall fell, and Germany was reunited. Moritz went to Berlin with his parents. Then France, the Cote d’Azur, Camargue. But London was his real destination. “I began studying International Business, but I realized that was not my path.” He switched to Engineering. He did Mechatronics at King’s College, a complex discipline that combines mechanics and electronics. Then he took a Master’s, also in London, with Philips at Philips Resources, where he then began working. “Those were the dot-com years, with lots of enthusiasm about the future: I can say that I was in one of the most technological and futuristic places anywhere.” He immediately grasped the potential of LEDs and got to work, developing devices for this new lighting technology. “Towards the middle of the 2000s, the crisis hit London, many companies closed, but I was determined to stay. They told me to show my work to a guy named Ron Arad: the result was a very important relationship of work and friendship.” This was his launching pad as a designer: for Ron Arad, with Swarovski, he created an interactive chandelier (2006). That same year, also with Swarovski, he did an interactive clothing collection, collaborating with the Turkish fashion designer Hussein Chalayan, and in London he did the exhibition Electric Kind. Next came a series of important works that coincide with the opening of his studio in London, including the exhibition Design & the Elastic Mind, at MoMA New York, in which he showed his personal version of the ping pong table with LED lights and DuPont Corian, followed by projects for major brands like Audi, Philip Treacy, U2, all the way to a truly innovative piece in the history of design, My New Flame, presented at the FuoriSalone in Milan in 2012 with Ingo Maurer, an LED candle that has become part of the permanent collection of MoMA New York. Tireless? “Just curious about all the potential offered by the world of design,” Moritz says, “because every project is different, which is part of the fun of this job, finding new stimuli even in things that are very far from design: I like contamination, creating new experiences, for example by working with Kung Fu masters on a performance of light, to capture the aesthetics of gesture through beams of light.” He is particularly proud of his two latest projects: the first is installed in the lounge of the Intercontinental Hotel in Davos, Switzerland. “This is a light installation made with a 30-meter chandelier: its geometry is based more on the mathematics of the form than on the lighting technology, and it consists of a series of very simple glass spheres.” Moritz’s idea is that this large chandelier can create “a wave of design that produces warm light downward, while projecting blue light up to the ceiling, making it like a starry sky at night.” On 5 December, at laRinascente in Milan, the design light installation opens, in all the windows facing the Duomo and the portico. Entitled WinterWonder, it is a performative light installation made in collaboration with Interni. “The idea was to simulate a spiral of cold wind that brings marvelous plexiglas crystals from the portico to the windows, which combine in fairytale designs and change color like a kaleidoscope.” This is something of a synthesis of the great quality of Waldemeyer: the capacity to combine extreme technical expertise – he constructs all the pieces that are to be produced with his staff – and an extraordinary ability to create emotions.