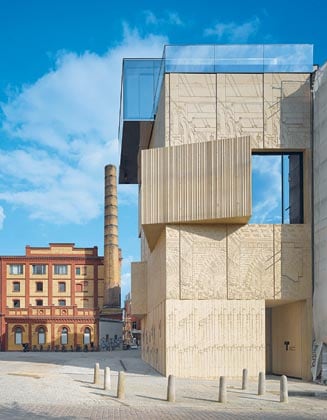 For Sergei Tchoban, the Russian architect and founder, together with Sergei Kuznetsov, of the Moscow-based architecture studio SPEECH Tchoban & Kuznetsov, curator of the Russian Pavilion during the last two editions of the Venice Architecture Biennale, architectural drawing is a fundamental factor in any project today.

For Tchoban, architectural drawing is not just a passion cultivated since his years of study at the Art Academy of St. Petersburg, his native city. It is also the start of a process that develops on paper and then comes to grips with constructed reality, activating a confrontation with the city and the territory. His passion for drawing can also be seen in the initial sketches and graphic developments of every project, mixing classical memories, not only of his city, with figurative and thematic analogies and attention to history. A way of designing that transforms a ‘compositional fantasy’ depicted in watercolors on paper into a tool of operative reflection for constructed architecture. All this can be seen today at the Tchoban Foundation in Berlin, a private museum on architectural drawing of yesterday, today and tomorrow, involving its founder as well as Kristin Feireiss of Aedes Architectural Forum and Eva-Maria Barkhofen, director of the Architectural Archives of the Academy of Arts of Berlin. The museum becomes part of an international circuit of cultural poles on the theme of architectural drawing, including the Sir John Soane’s Museum of London (which curated the opening exhibition of the Tchoban Foundation, “Piranesi’s Paestum: Master Drawings Uncovered,” until 31 August), the École Nationale Supérieure des Beaux-Arts of Paris, and the Hermitage in St. Petersburg. In urban terms, the museum is located on the west side of the area of the former Pfefferberg brewery, adding its new figure at the entrance to the area from Christinenstraße, joining the brick factory behind it and its high conserved smokestack. The museum has five levels above ground and one basement, and underscores the vertical aspect in the stacking of the volumes, which like a construction game combine complete blocks, creating a dynamic development that concludes at the top in the glazed space of the conference room, overhanging the lateral facade and facing the terrace. The individual blocks of the building, up against the solid wall of the adjacent construction, are aligned with the street frontage while producing a slight torsion or rotation, accenting the compositional role played by the different overlaid spaces, an architectural and volumetric summation, apparently in a state of unstable balance. The fronts of the batchcolored reinforced concrete blocks, in sand tones, bear portions of architectural drawings and sketches on both the outer and inner surfaces, obtained by ‘etchings’ left by the prepared formworks after stripping. On the ground level, which contains the entrance to the museum, conceived as a library, certain portions of the facade drawings are ‘hollowed’ in keeping with the depicted motif to form small glazed openings that from inside, along the stairwell, are perceived as a succession of abstract signs. The museum thus communicates its character and content in the archival space of the third level and the two rooms set aside for programmed exhibitions, on the first and second levels. Each solid volume, sculpted by the engraved drawings, corresponds to an independent, functional interior, connected by the metal ribbon staircase open towards the glass elevator. A work of architecture to discover, a materic skin with a narrative role; a museum whose relationship with the host site outlines an approach to design research, combining history and the contemporary in a successful compositional synthesis free of stylistic nostalgia and projected into the future.