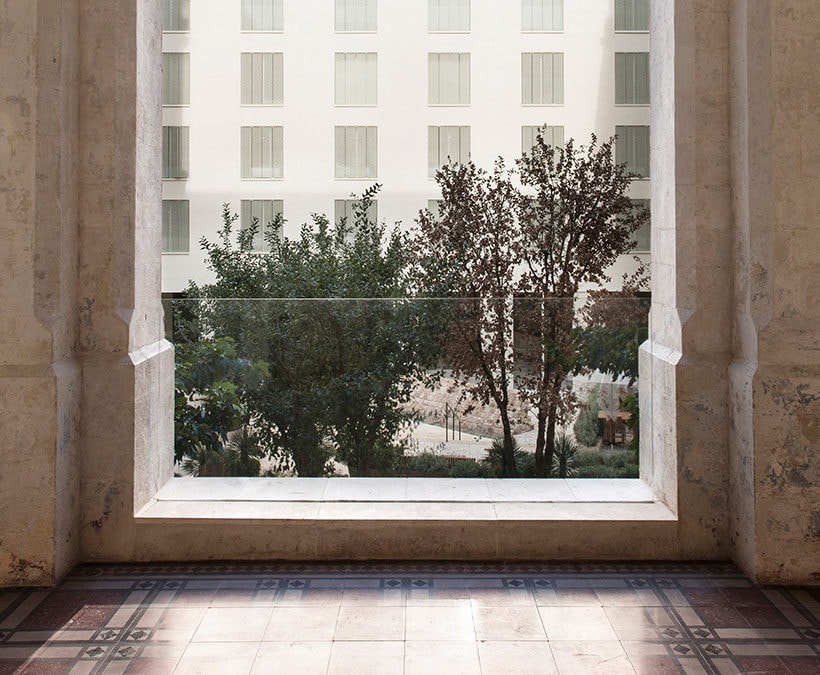 A new five-star hotel recently opened in Israel, on the promontory of historic Jaffa, establishes a dialogue with the past while modulating the light of the Mediterranean. Designed by John Pawson in collaboration with Ramy Gill, the project transforms a hospital from the 1800s into a luxury hotel flanked by a new residence with a minimalist approach

Light and shadow. Antique and contemporary. West and East. These are the contrasts in the new 5-star luxury hotel ‘The Jaffa’ recently opened in Tel Aviv, in the heart of Jaffa with its 4000 years of history.

“It was not so easy to approach the age-old stratifications of this place where different cultures, civilizations and traditions have formed a sequence, also in terms of strife and confrontation: but this was precisely the key to the project.”

These are the words of John Pawson, the renowned British architect who has designed this new hotel in collaboration with Israeli colleague Ramy Gill, a true authority on projects of regeneration in the historical areas of Tel Aviv (including the rebirth of the old port of Jaffa).

Together, they have transformed a former French hospital from the 19th century, which had been abandoned for years on the top of Jaffa, into a spectacular 5-star facility with 120 rooms (including panoramic suites) and 30 (including a penthouse) very modern apartments facing the Tel Aviv skyline and the golden beach.

“The project comes from dialogue,” says the architect Ramy Gill. “An intelligent dialogue between two centuries, the 19th and the 21st. Next to the old hospital, which was opened in 1879, almost 140 years ago, we have also made a new construction. But both buildings conserve their own autonomy on a formal level: there are no connecting bridges, no architectural inventions to join the two volumes. The antique and the new face off, confronting each other, while conserving their independence.”

Actually, the two buildings do meet, but below the ground. “We excavated 18 meters of underground tunnels,” Gill explains, “to provide all the functional factors required by a big hotel: from the movement of goods to the creation of new spaces for wellness (a spa and a fitness room), which otherwise would have been placed in the old building. This solution has allowed us to preserve that patina of time that brings beauty and atmosphere to the spaces.”

Like the stone wall that suddenly emerges from the floor of the new lobby: an extraordinary, unexpected presence that takes us back to the Crusades (it is the only remnant in the entire Middle East of a circular fortification built precisely in that period).

In this context, the sensitive, well-balanced interior design brings together present and past, establishing a dialogue between classic design pieces and tradition: from the sofas by Pierre Paulin and Shiro Kuramata, two masters of modern furnishings, to the Shesh Besh tables specifically designed by John Pawson to offer the hotel guests a place for the traditional game of ‘tric-trac.’

The link to local culture is visible above all in the new wing, built from scratch, which contains the residence: the facade is ‘embroidered’ by light, pale metal panels with Arabesque motifs, screening the windows and forming the volume of the balconies. This is a clear tribute to the mashrabiya, the protective wooden grates, with fine carving work, that adorn the doors and windows of traditional constructions.

Furthermore, these screens formed by staggered pairs of metal plates capture the light of the Mediterranean, creating magical effects of light and shadow in the interiors. In certain moments the floors seem to be transformed into enchanging floral carpets.

Pawson, the master of light, explains: “The powerful sunlight of Jaffa, with its unique, enveloping brightness, could obviously not be overlooked. The light, in fact, changes the sense of space, its scale, its perception. I am often accused of making interiors that are too white, without color. But the light offers millions of nuances, each different from the next. Not to mention the shadows… Light and shadow are marvelous materials in the hands of architects.” And the project of The Jaffa is an excellent example.

The new hotel The Jaffa is the first facility of the American group RFR Holding in Tel Aviv. Next to the hotel (a 5-star unit of Marriott’s Luxury Collection of Hotels & Resorts) created inside a former hospital from the 1800s, the complex also features a new residence: below, a detail of the balcony with the arabesque grates, the leitmotif of the whole project, facing the sea and the beach of Tel Aviv.
View of the beautiful internal garden shaded by trees.
A corner of the Golda’s Deli restaurant, whose interiors and cuisine reflect the metropolitan style of New York City.
The cloister of the old hospital, with the original flooring; the image also offers a glimpse of the foliage of the trees that shade the hotel’s second restaurant, Don Camillo, serving up classic recipes of the Mediterranean tradition.
The Chapel, lo spettacolare lounge bar, aperto al pubblico e non solo ai clienti dell'hotel, allestito nell'antica cappella dell'ospedale: l'arredamento si ispira al design anni Settanta come ben testimoniano le sedute Botolo di Cini Boeri (Arflex).
The new staircase offering access to the second and third floors of the hotel forms a clear contrast with the historical context, avoiding any imitation of the past.
The hotel and the apartment building face each other while conserving their own autonomy.
The new building, with its minimalist architecture, forms the fourth side of the inner courtyard which contains a remnant of fortifications dating back to the time of the Crusades (in the foreground). To the right, the lobby of the hotel, with a view in the background of the path leading to the outdoor pool, with a relaxation area and a bar.
The living area with the kitchen and the conversation corner.
View of the bedroom: light enters through the window screened by a metal grate, casting a sort of floral shadow carpet on the floor.
The elegant marble bathroom. The furnishings of the apartments and the hotel, all designed by John Pawson, have been produced by the Contract Division of B&B Italia, including the bathrooms and the floor finishes.
#Design #Projects