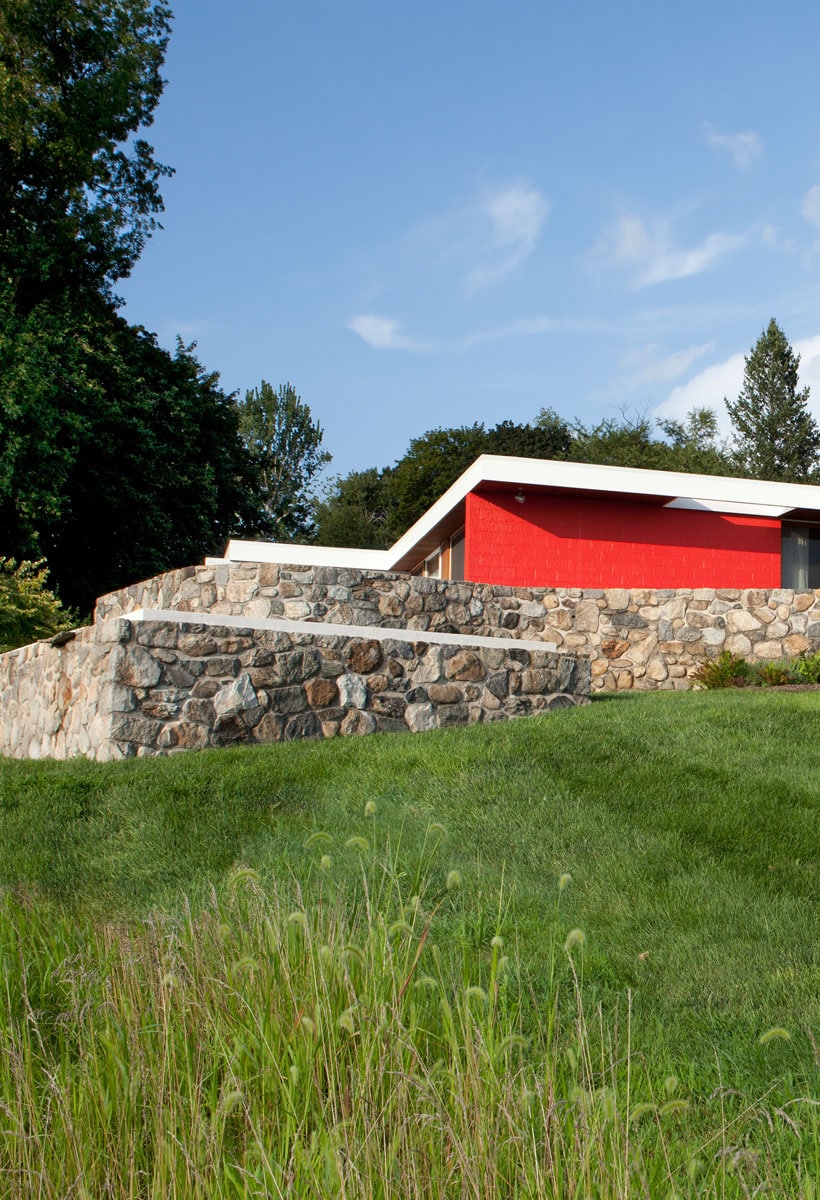 Straight lines, primary colors and natural materials. The house designed for Vera & George Neumann at Croton-On-Hudson, NY, in 1953 by Marcel Breuer, the Bauhaus master, now begins a new life after the philological renovation coordinanated by Ken Sena and Joseph Mazzaferro.

Ken Sena and Joseph Mazzaferro wanted no fakery. Dazzled by the fluidity of those essential spaces, those straight lines, those vibrant colored surfaces, spreading lengthwise to frame panoramic views of the Hudson River, Croton Point Park and the Tappan Zee Bridge, after rigorous reconstruction they have restored the original layout of the house Marcel Breuer designed in 1953 at Croton-on-Hudson for the textile designer Vera Neumann and her husband George.

“
We found it as it had originally been conceived by Breuer in the 1950s for the Neumanns. A spacious machine à habiter with no adornments, based on a sum of concatenated and interconnected volumes on a single level under a flat roof: the main wing. (Ken Sena and Joseph Mazzaferro)"

The Neumann house belongs to Breuer’s American period, when the Hungarian architect-designer who directed the furniture workshop of the Bauhaus in Weimar, Germany until 1928 – at the legendary school founded in 1919 by Walter Gropius, cradle of the Modern Movement, closed by the Nazis in 1933 – was already across the ocean. In the States the modern master, creator of the first chairs and tables in metal tubing (still produced by Knoll today), produced an exceptional work in 1966, the Whitney Museum of American Art in New York, at the intersection of Madison Avenue and 75th Street. A truly timeless masterpiece.

°
Born May 21, 1902, Pécs, Hungary - Died July 1, 1981, New York City, New York, U.S., architect and designer, one of the most-influential exponents of the International Style; he was concerned with applying new forms and uses to newly developed technology and materials in order to create an art expressive of an industrial age.

This single-family house purchased and restored by Ken Sena and Joseph Mazzaferro, in a wooded village in New York State, is paradigmatic for an appreciation of the cultural value of the International Style in the field of housing, as a programmatic synthesis of architecture-design-art in dialogue with nature. The renovation took two years, from 2014 to 2016. And the project gained a nomination for the Design Award 2017 at the Docomomo Modernism Awards.

«We found it as it had originally been conceived by Breuer in the 1950s for the Neumanns» Ken Sena and Joseph Mazzaferro say. «A spacious machine à habiter with no adornments, its expressive impact based on a sum of concatenated and interconnected volumes on a single level under a flat roof: the main wing, the guesthouse connected to a sloping stepped structure, the internal pool house built afterwards as an appendix, and the outdoor pool cut into the stone perimieter of the terrace made at a lower level, following the slope of the terrain. But when we took over from a previous buyer» they continue, «the conditions of the walls and surfaces were critical, since they were gradually crumbling. The flat roof had never been repaired. Many structural and mechanical parts had deteriorated and had to be replaced. The pools were in a state of abandon and the outdoor one was in very bad condition, invaded by weeds. The indoor pool, over the years, had suffered from lack of dehumidification of the air, ruining the ceramic floors, the cedar paneling and the skylight of its space».

10
Photo: Undine Pröhl - The living area with the sliding glass doors that erase the distance between inside and outside, bringing vibrant natural light. The furnishings designed for the villa by Marcel Breuer in the 1950s have been carefully salvaged or rebuilt. Joseph Mazzaferro designed the two armchairs facing the original sofa.

So the restoration challenge began. The new enlightened owners have tried to regenerate every part in keeping with Breuer’s design, working by subtraction while conserving the quality of the contents. They have respected the range of materials selected by the architect for this country home – wood, steel, glass, stone and white plaster for the walls – expressing an economical vision in the use of means (less is more). They have maintained the concept of the open plan, the position of the studio and the kitchen at the sides of the living-dining area, communicating with the belvedere terrace, in a continuous indoor-outdoor relationship. Other factors to conserve were the habitat spaces for adults and kids, with separate entrances, the layout of the five bedrooms, the innovative radiant floors. 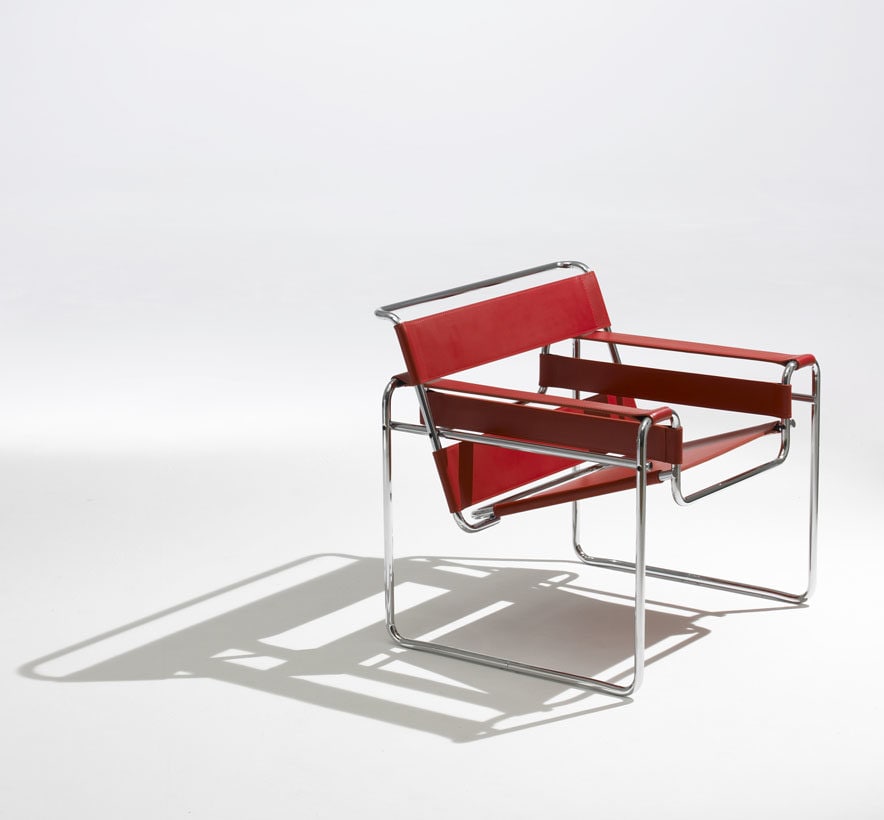 5
Inspired by his bicycle frame, in 1925 Breuer designed the armchair that was to be known as the Wassily, in honor of Wassily Kandinsky. Reissued by Dino Gavina in 1962, it became part of the Knoll catalogue in 1968 (photo Joshua McHugh).

Then they reactivated the curtain wall system with sliding glazings, a distinctive feature of modern architecture. They dismantled and reassembled the structural tracks with ball bearings that form the base of the transparent surfaces and their wooden frames, made slightly thicker to prevent heat loss. And they have reconstructed the furniture, where it no longer existed, starting with Breuer’s drawings.

«In a drawer we also found the scanned and filed image of the silk of Vera Neumann with a print of the chromatic pattern of the Neumann House, which she then used for the curtains». The study of colors is a remarkable feature of the architectural design, inspired by the theories of Paul Klee, a colleague of Breuer at the Bauhaus, combining two primary colors, red and blue, with white. Vibrant harmonies of the eye and the spirit, arrayed on precise partitions and outdoor wall portions, with the development of the house in the landscape below the line of the seamless portico. 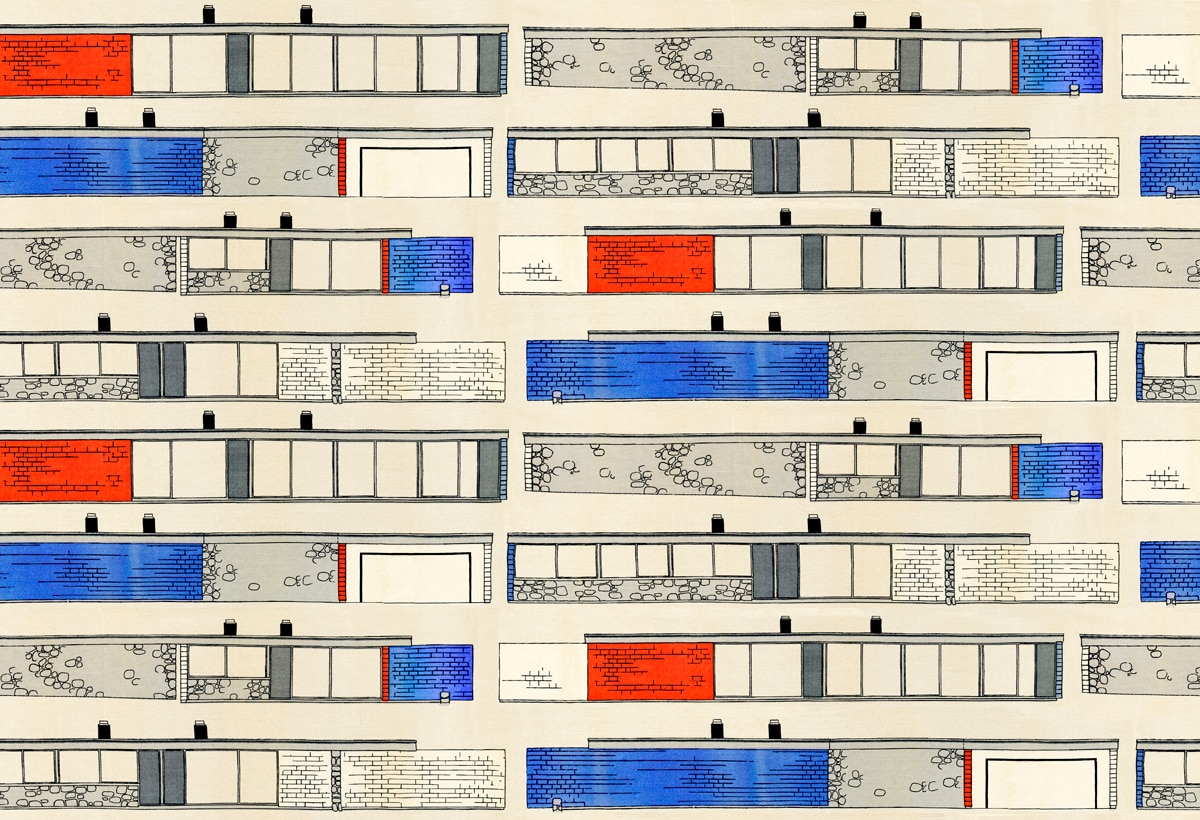 1
The study of colors is a remarkable feature of the architectural design, inspired by the theories of Paul Klee, a colleague of Breuer at the Bauhaus, combining two primary colors, red and blue, with white.

Indicators of physical fullness: a contrast with respect to the glass surfaces of the facade, and the exposed stone of the perimeter. «Outside, the most delicate operation was to put the electrical lines underground, so as not to interrupt the view of the Hudson», the owners say. «We have also installed a neon sculpture near the pool, as a tribute to the art of Vera Neumann, for whom Breuer envisioned a garden of flowers and ferns, as a source of creative inspiration». This year is the centenary of the Bauhaus. It is satisfying to think back on the school in a house that has found peace, serene isolation and silence, openness and intimacy, sun and shadow. Where Marcel Breuer is the constant, invisible guest.