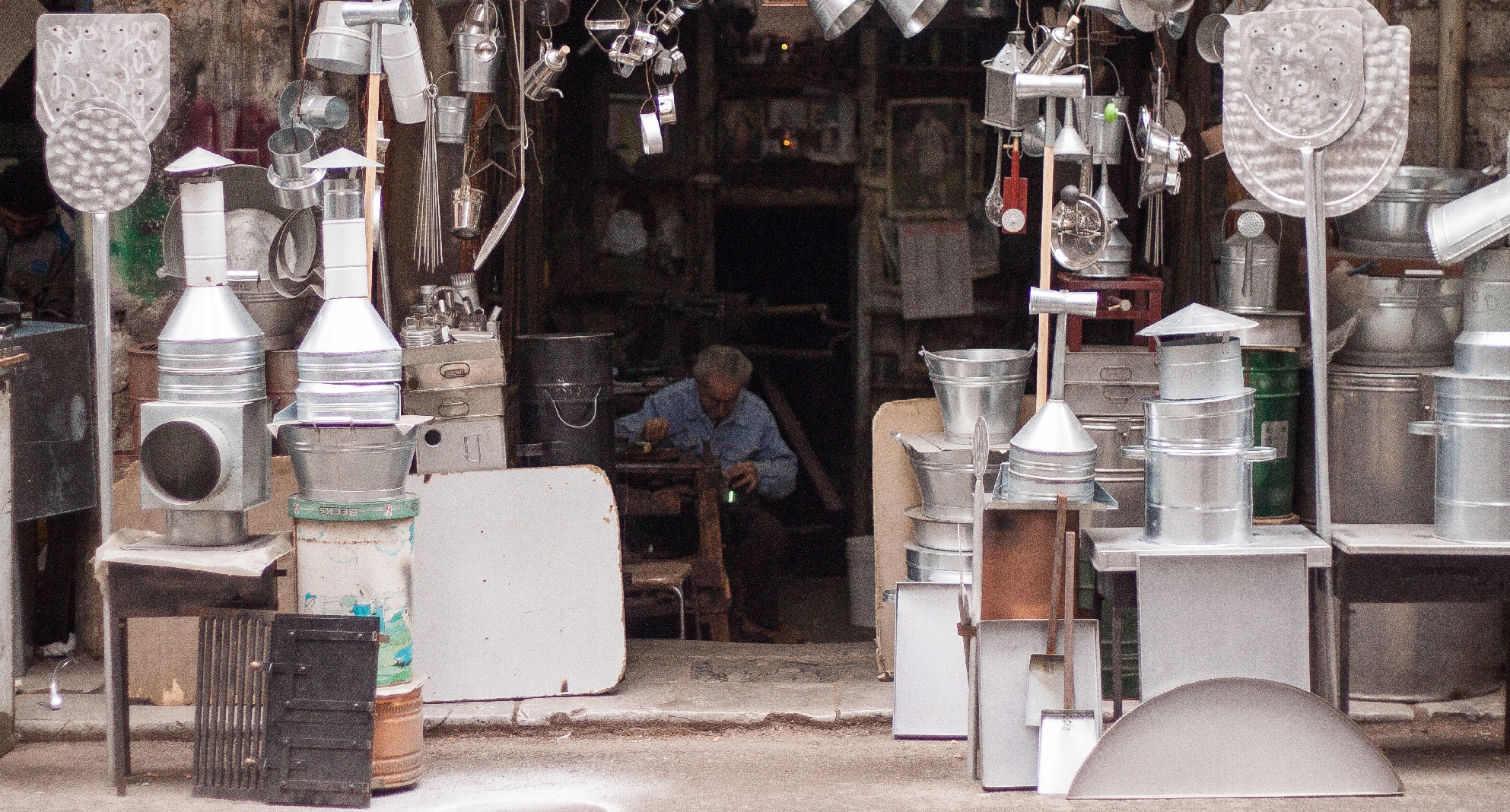 We are seeing a growing recovery and reinvention of territorial crafts cultures, especially on the part of young Italian designers. The know-how of a place or the materials of a geographical area are reinterpreted through citations, not replicas, of folk forms and ‘slow’ fabrication, where the gesture of the craftsman rediscovers its poetics. Design adds a narrative and conceptual value to handmade things, narrating their material history.

Vittorio Venezia, from Palermo, has the tinsmith Nino Ciminna of Via Calderai, the historic street of metal crafts, make luminous steel bodies inspired by the metal containers and traditional utensils of western Sicily.

The Florentine ZP Studio interprets a formal archetype with nearly extinct crafts processes and materials, tracked down in Tuscany and Emilia Romagna.

Finally, the Portego collective selects projects to be made by Veneto-based artisans of different kinds, evoking the typical characteristics of the Veneto landscape.

Are these projects, though isolated attempts, a signal of a reawakening of the genius loci? Can we talk about territorial design? We asked Ugo La Pietra, an expert on Italian artistic crafts, who has given a definition to this design vision.

But before answering the question, the versatile artist and theorist wanted to get a few things straight. “The renewed interest in crafts brings to light a typical problem of our country that is very seldom described. The birth of Italian industrial design has led to lack of interest in the artisan culture of making.

And it has imposed an opposite design approach with respect to the applied arts, which start by investigating material. Design graduates have no culture of making, so what they do is not at a high level of quality.

Furthermore, today – on the average – people cannot distinguish between pottery and porcelain. On the other hand, beyond the Alps, but also in the United States and Japan, applied art has continued to develop, cultivating a generational practice and giving rise to institutions, schools, museums and a market of high-level collectors. Italy has trouble coming to terms with this market. The craft design appreciated in our country is done with serial processes, like ceramic molds, that have nothing to do with the artistic crafts one finds, for example, in Japan.”

In the 1980s and 1990s Ugo La Pietra created spectacular exhibitions at Abitare il Tempo in Verona, the fair founded as a tribute to the ‘period’ furnishings that represented 70% of sales in the wooden furniture sector in those days. With his exhibitions, architects and designers came into contact with craftsmen, repositories of the culture of making, taking advantage of a level of quality that had been lost.

“That graft between design culture and the culture of making is no longer possible today, because the crafts companies are almost all gone. And if the people who can do the job are lacking, a true movement cannot really emerge. Today designers have to make up for a dreadful hole we have dug ourselves. It is also and above all the fault of the institutions, which have not be able to promote and protect crafts.

The new generations, however, can rely on our DNA, i.e. our way of doing things under the most difficult conditions, and of designing in what Enzo Biffi Gentili and I have called ‘metropolitan crafts,’ a way of making that involves new strategies, not just technologies such as 3D printing, but also materials no one ever thought about using.

The forerunner is Gaetano Pesce, who has experimented with the unique qualities of silicone. Diversity will be the key value. Nevertheless, the designer has to be capable of a complex creative act that systematically approaches the project, the production, the communication and the sales. Otherwise these will be isolated operations that will soon run out of steam.”

Ugo La Pietra, then, does not think this new focus of design on crafts can be a movement or a return to the genius loci: “Globalization has a counterpart in diversity; just as the virtual dimension has a counterpart in the natural dimension. These are oppositions of a schizoid character in which our society lives. Nevertheless, research on territorial character is a design path, if it penetrates the territory like a probe and tries to understand how to exploit environmental and cultural resources.

This is the field of territorial design that identifies, with the methods of an anthropologist, the stratification of experiences and knowledge that makes a place unique and recognizable. The common elements are sometimes hard to discover because the resources are not only material, so in this sense many projects are very superficial actions. With the Ronchey Act, which permits the sale of objects in museum stores, I thought museum merchandising might become a business resource. In the rest of the world that is true: the Metropolitan Museum of New York even has an in-house workshop for making objects.

These products, like souvenirs, can bring value and transform know-how, raising its level and promoting its rooting in the territory. Think about how many cultural and tourism events there are in every region of Italy, for which something could be designed. At Montelupo Fiorentino, an area famous for ceramics, the municipality has asked eight artists, including me, to make six permanent urban sculptures with local artisans. This is a way of adding value to the genius loci because the idea of the artist is joined with territorial identity, seen as the resources of the territory, speaking of the excellence of the city, which in this case means ceramics.”