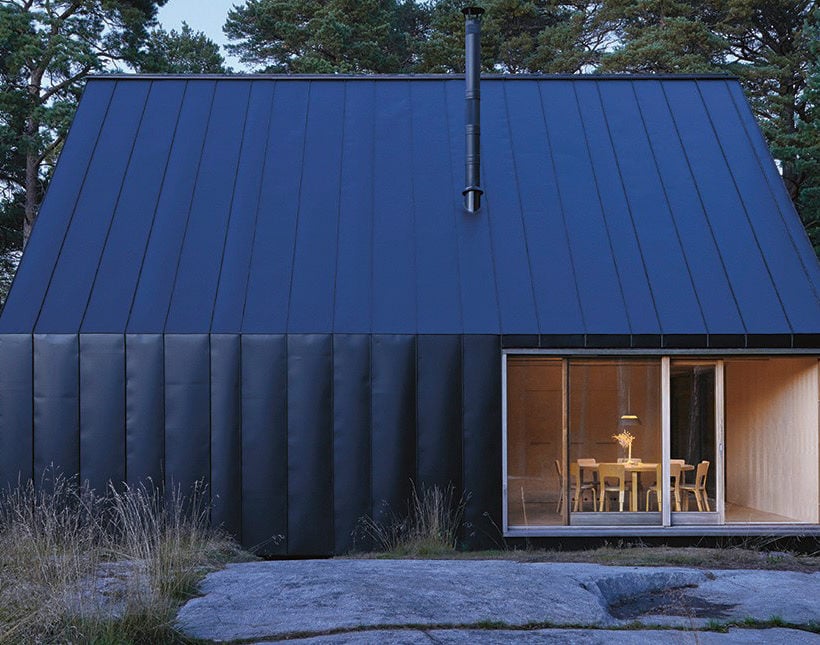 It is no coincidence that Martin Videgård and Bolle Tham decided to open their architecture studio precisely on the island of Söldermalm, in the southern part of Stockholm: a checkerboard of streets studded with gardens, retro cafes and art galleries, which still conserves a concrete, sincere architectural atmosphere typical of a former working class suburb. Because since the start of their career (back in 1999) the Swedish duo has made understatement its stylistic and human trademark. As they explain in this interview.

In recent years your studio has produced very interesting projects in the area of public and commercial architecture. Nevertheless, the focus you have always had on private housing, including single-family houses, would seem to make this a continuing field of experimentation and research. Is that the case?
Yes, we have worked very extensively on private residences, though today they represent just 20% of our activity. When we opened our studio 18 years ago we did not have any big commissions: we began with small projects, mostly houses, which for us represent the first opportunity to make architecture, an experience we enjoyed very much.
Later, when we were asked to make bigger works like schools or museums, we still felt the need not to lose sight of the smaller scale: it does indeed represent an excellent context in which to experiment with architectural ideas and above all to see them take form rather quickly. It took eight years to complete the School of Architecture (the latest project by the studio in Stockholm, ed.).
We like to shift from one scale to another, in any case, because the experience accumulated doing small projects is useful for the larger ones as well. For example, when you design a museum, you often have to also make a bookshop or a restaurant or a cafe, and having designed such facilities, we have an immediate advantage.

What are the starting points for the design of a house? Is there a pyramid of priorities: site, clients, private, public, social, ecological needs?
Architecture is like an umbrella: it contains all those aspects. Undoubtedly for us the site is important, not only for the landscape context but also for the cultural context, namely history, local know-how, all the social aspects. Moreover, you can find yourself working in the country or in the city.
In the first case we have always tried to make buildings that could be ‘removed’ so that the natural environment could return to the way it was before: we have done this with the many houses built on the islands of the archipelago of Stockholm. We were inspired by the way the houses built by fishermen or farmers were made: they are always simple structures, easy to move if the need arises to go from one island to another. This humility with respect to the landscape is a source of inspiration for us. The situation changes if you are designing in an urban context.
The city of Stockholm, for example, is densely settled and land is very expensive: paradoxically, it is more complicated than building a house in the middle of the forest. Finally, there is also the need to find the right responses to the needs and desires of the clients, responses that naturally cannot be separated from the site and the relationship with the environment. So the challenge is to develop an idea that brings the best possible performance, we might say, i.e. something that is capable of responding to multiple needs, also in a pragmatic way.
You also have to take into account the way materials will be transported to the worksite: if, for example, you are working on an island, it is logical to use light materials like wood, while if you are in a place that can be reached by trucks you can use concrete or brick. These are practical, concrete aspects, which are very stimulating because they reflect the meaning of how to build the right thing in the right space.

Is there always a Nordic spirit in your projects?
At the latest Venice Architecture Biennale we presented the project of the Treehotel as a symbol of the Scandinavian tradition. For us there is a strong connection to nature precisely because we have a country with immense spaces, not densely populated.
We think that in Scandinavian architecture there is a kind of humility, which is also pragmatic, that leads you to do only what is necessary, in the most efficient way. Often there is a return to the classic Swedish cottage, with its distinctive red color: a practical, no-frills piece of architecture, vernacular, never excessive, simple but always substantial.
Nevertheless, we would use the same approach even if we were working abroad: we would put local know-how, materials and resources together with the universal principles of architecture (proportions, light, orientation), without sacrificing our personal idea of architecture. So even in other countries, we might make red cottages or in any case buildings that are connected to the concept of vernacular architecture, conveying an utterly personal and intuitive idea on how architecture should be, and on what it should offer…

In 2015 your studio was nominated as ‘Architects of the year’; that same year, you also won the ‘Private House Award,’ and your School of Architecture recently was named ‘Stockholm Building of the Year 2016’: a very productive period. How have you earned these important honors?
The secret of our success is teamwork: we collaborate on everything. The projects come from a continuously evolving discussion, moving forward only with works we find stimulating, where it is possible to experiment or to discover something new.
In this way architecture becomes an opportunity for study, investigation, through which to identify new possibilities, solutions, aesthetic values. We always take our work very seriously, and try to be as engaged as possible, to stay involved… as a result, what we propose is always realistic: not dreams or utopias, but a way of trying to stay as close as possible to the concrete matters of life. Maybe this is not a very common approach… Many architecture studios want to do business, to try to grow as quickly as possible…
Instead, we think it is better to make something of good quality, rather than three projects without depth! In short, concentrating on just a few projects helps us to be more competitive. At the moment we have a staff of about twenty people: a small group, but this too is one of the key factors in the quality of our work, because each person has a role that is clear to everyone, and everyone knows what the other colleagues are doing. Of course if we win many competitions we will inevitably have to grow! But this is not the goal: our work is already sufficiently valid and interesting. We prefer to do a few projects in the best way possible. To stay humble and authoritative at the same time.