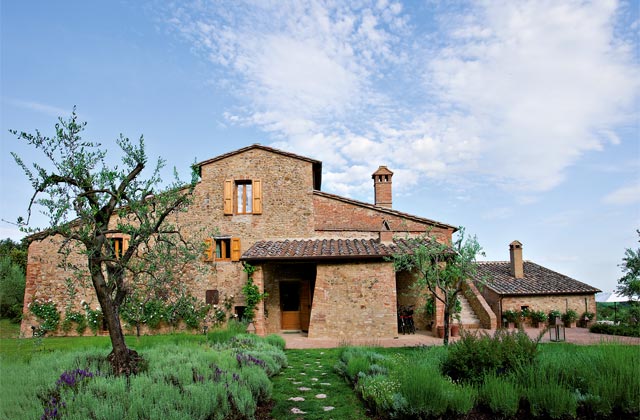 Over time, thanks to everyday experiences on construction sites, she has developed an almost infallible ‘magic eye’: “I almost never measure things, I just guess, and I’m usually right”, says Doriana Mandrelli, the internationally renowned designer and architect who – with Massimiliano Fuksas – has created famous works all over the world.

Maybe this is why Fuksas totally relies on her and on her feminine sensitivity in private, authentic projects: the homes they live in, in many different cities in the world. The one in Chianti is a case in point. “Thirty years of private and professional sharing have their weight”, Doriana says. “Massimiliano has worked on the consolidation of the structure, but he has left me with ‘carte blanche’ on the restructuring of the interior spaces. Actually, he was the one with the most motivation to find a place in Tuscany, near Montalcino, the hot springs, the sea. It is not so far from Rome, the location of our main home and studio. We saw and bought this hillside house without hesitation, during the course of a single afternoon. The swallows’ nest under the roof cornice seemed like a good omen”. There are plenty of evocative things: the oldest part of the house is faced in brick and river stone, dating back all the way to 1300, “which may have been a work of religious architecture”; the smaller building is from the late 1800s, and was used as a toolshed and barn. The facade is still marked by the functional openings in the bricks. These two volumes are parts of a larger settlement, and are now connected by terracotta steps that pass through many outdoor living spaces. Lots of colors and flavors, blending in the nearby woods for a 360-degree experience of the changing seasons. Behind the complete experience, very patient work has been done to rediscover “the authentic spirit of the place”, Mandrelli says. “The house and the land spoke for themselves: I have just simplified, removing things that did not belong to the essential original architectural structure, made of humble, timeless materials. I have stripped off the later contaminations, including a decidedly aggressive renovation project from the late 1970s. The project began and was developed in the place, as happened for the houses on Pantelleria and Filicudi. Here we were interested in rediscovering the countryside and, above all, the great serenity of these places, both inside and out. We consolidated the structures, redid the casements, chose handmade terracotta for the floors, in an almost pink shade, lighter than the local standard. I concentrated on the cozy interiors, organized around fireplaces, connected by big arches or small vaults. The goal was to open the spaces as much as possible, to make them communicate, increasing luminosity and a sense of spaciousness. I don’t really like the dark, often oppressive tones of traditional Tuscan homes, permeated by the physical impact of terracotta, with big wooden beams and furnishings. So even the chestnut beams under the roof have been painted with white lime, while the walls have been treated (except in the kitchen) with paint and finished with a wax varnish that leaves imprecise traces, like signs of time, on the walls”. On a compositional level, the main building contains a large living area on the ground level, an open space that combines living and dining functions with a large kitchen and a guestroom. On the upper level a wing has been set aside for private bedroom areas, while another wing, on two levels, has been organized for the youngest daughter. The second building contains a private cinema, a studio for the architects and another guestroom. If the original 19 small rooms seem to have been enormously enlarged, thanks to the new layout, what really makes all the difference in this project are the objects of contemporary design, vintage design and crafts: they bear witness to eclectic taste, skillfully deployed combinations, contaminations, stratifications. Down to the smallest detail. With rigor and precision. “I have sought and purchased just the tables and the Tuscan 17th-century cupboard”, says Doriana. “For the rest, everything is a matter of recycling: from the divans covered in white in the summer and velvet in the winter, to the organic chairs by Arne Jacobsen,the antique doors from Morocco hung on the walls like paintings to the Thai pieces with their lively colors, that have become the frames for mirrors… all things gathered on work trips, nomadic explorations, sudden encounters. The objects came before the house: often I still didn’t know what to do with them and where to put them, but I followed my instinct… some things stayed in storage, in the garage or the studio, until they found the right position”.