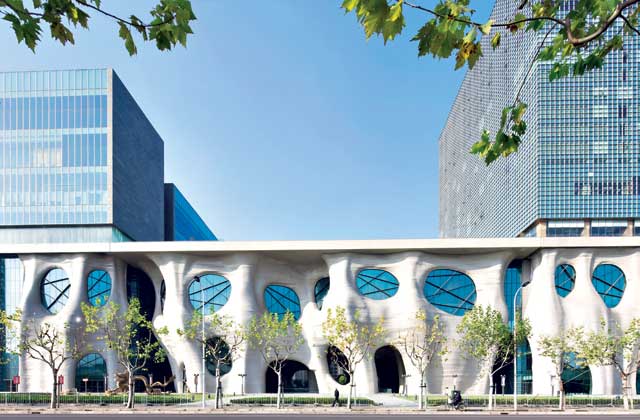 Those who have been there recall the whistling of the icy wind, the breathlessness from wonder and altitude.

From Lhasa to Kathmandu, the Friendship Highway is the only route that connects Tibet to the rest of the world. 800km of dangerous curves and infinite straightaways, between thrilling cliffs and frozen lakes. Himalaya, literally “house of snow”, like an old wise man with a white beard, follows you solemnly, reassuring you with open arms. Eyes closed, the dream of Dai Zhikang, the powerful president of the Shanghai Zendai Group, was to be able to open his eyes and see the Himalayas. The infinite dimension, an unreachable ideal, is a road, with two lanes, one functional, the other symbolic. China is the pioneer of the heights, and Shanghai, Pudong, is its up-and-coming zone. Facing the eastern bank of the Yangtze, this is the platform of the Lujiazui financial district and of the fierce rivalry among ambitious skyscrapers. Among the world’s tallest, the Jin Mao Tower, the Oriental Pearl Tower and the Shanghai World Financial Center vie for commercial visibility and media attention, while below there are still the remains of decrepit buildings, devoured by smog. “An urban reference point to spread new faith and provide a direction for a historical era. It should represent the personality of the city”. Dai Zhikang is an expert, and he avoids size contests. He doesn’t like physical comparisons, because he knows that sooner or later someone bigger will come along. “I foresee the end of the era of skyscrapers, which will be replaced by a more horizontal oriental civilization, as a model of worldwide integration”. A businessman and art collector, he appreciates architecture, above all when it is a tool for economic growth. He seeks its symbolic ideal, the unmistakable visage of a hybrid architecture of oriental features that knows how to incorporate the power of commerce and the poetry of art. There have been many failures, attempts to integrate, through geometric research, the omnipotent and the functional program, the metaphor and the structure. Very strong, incredibly close, Arata Isozaki was the perfect solution, a page of history. 80 years old, an impressive record of works in China, Vietnam, Ukraine, Qatar, Kazakhstan, etc. The geometric master guaranteed variety and experience. In the financial hub of Lujiazui, facing the Shanghai New International Expo Center and the Kerry Parkside Hotel, walking down Fangdian Lu, the Himalayas Center overwhelms the passer-by. It grants no certainties, no reassuring sense of belonging to an important event. An unidentifiable architectural object, set down on a lot of 29,000 m2, speculates on ambiguous, forceful forms, on a platform 31.5 meters high in exposed concrete. The complex breathes through elliptical glazed cavities that lead to vaulted caves. Extruded from the same valley of asphalt and deformed by the compression of the lateral orthogonal volumes, the triple-height Wuji Plaza puffs with wind and talks with an echo. It is a cone of shadow between two sunny avenues, the cave in which to seek shelter. On street level it communicates with the first Chinese Jumeirah Hotel and the office complex; on the upper levels it becomes an open bridge between the DaGuan Theater and the Himalayas Art Museum. The former, for artistic performances, expands with a rounded profile, following the outer surface of the plaza below, while the second, more rational, has five levels of contemporary art. Orient and Occident, Yin and Yang, intellect and passion, curve and line, oxymora that touch for just an instant, the bipolar attraction between opposites as a foremost necessity. Like a giant accordion, two cubic lateral sounding boxes protect the undulated bellows with incomprehensible threedimensional reticular parts. Arata says he was inspired by the neolithic jade Liangzhu, though others see Chinese men and women climbing up a wall that is too high. Beyond, the elite Jumeirah Hotel with its five stars, 67.5 meters above street level on the northern side; and retail shops, multifunctional halls and centers, on the southern side. The center is a roof garden of undulated greenery, gazing at the beautiful and ugly things that surround it. Its own architecture, the district, the dark silhouette of the metropolis.