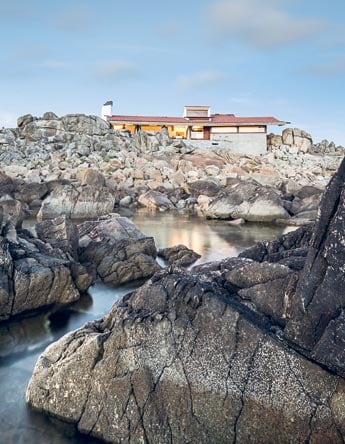 In 1958, at the age of 25, Álvaro Siza, who was still working in the studio of Fernando Távora – master of the ‘third way’ of Portuguese modern architecture, in which a focus on the vernacular tradition translates into fertile pursuit of a contemporary language that pays careful attention to history – took part in a competition for a Tea House by the sea, organized by his hometown, the Municipality of Matosinhos.

Along the coast at Leça da Palmeira, where an embankment wall bordered the beach and the cliffs, facing the Atlantic, and where the natural setting was almost intact thanks to environmental safeguards that prevented construction, the administration chose a promontory of volcanic stones connected to local memory (as part of the life of the poet Antonio Nobre) as the zone of intervention. Here nature descends into the sea, joining the surrounding meadows to the nearby beach and the jagged geometry of the rocks, creating a particularly evocative place, which the young Siza found somewhat daunting. As he recalls: “the project was the result of a focus on the natural balance of the area, which extends between a small church and a lighthouse further on. Therefore the restaurant is not high, both due to the nature of the building and to avoid clashing with the proportions of the church. The goal of the project was not to compete with that presence, while at the same time preventing the construction from being without character, reconciling the autonomy of the new building with the existing context”. However, for Siza the sense of place, listened to and absorbed, already in this early project is not a matter of mimetism or facile environmental camouflage; instead, he uses the relationship with the landscape to bring out the ‘conflicts’ the architectural operation objectively produces in the action of superimposing the geometric rigor that is part and parcel of any work of architecture on the topography and natural forms of the site. “I am not in favor of being in awe of the context, the very idea horrifies me”, he was to say, some time later; from the rocks of Leça da Palmeira, and from any place where he operates, Siza grasps the opportunities, the hidden possibilities, the work of time, which become the project themes. So for the Boa Nova Tea House he captures the meaning of the rocky profile, rectifying it towards the sea with a precise line, that of the top of the single-pitch roof in red Roman-style tiles, marked at the ends by protruding copper gutters. The roof, with an overhang with respect to the facade below, underlined by the thick wood of the upper band, protects the symphony of continuous openings, side by side in different sizes, that from the internal spaces frame the marine horizon, as in a film. The exposed concrete wall functions here as a support base, then transforming in the more dynamic facade towards the street into a succession of white volumes with a Mediterranean image, joined and paced by the tall chimneys topped with terracotta. Inside, wood plays a connective role with certain facade elements like the casements and the facing of the sloping ceiling in boards of red Afzelia (an African wood), continuing outside, and marks the light from the skylights with a game of descending crenellations. The same material, in an elaborate play of interlocks and connections, is used for the floors, the staircase and the half-height paneling, which together with the custom furnishings, also in wood with upholstered portions covered in black leather, now reproduced to match the original models, create an intimate, welcoming atmosphere. With this project Siza underlines the path indicated by Távora, combining a focus on the figures and materials of traditional Portuguese architecture, reinterpreted, with the need to by contemporary, in the time.