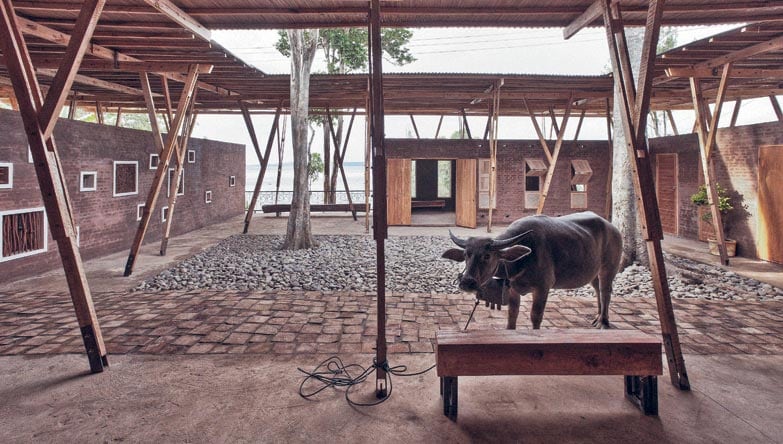 They have done a number of projects in the poor, underdeveloped areas of Thailand, Burma, Haiti and Uganda.

Young, with an original, courageous approach, Andreas G. Gjertsen and Yashar Hanstad, at the helm of the studio Tyin Tegnestue Architects since 2008 in the Norwegian city of Trondheim, have a humanistic and romantic outlook: their architecture is one of necessity, of fundamentals and social sustainability, involving local populations in the phases of design and construction. It is a viewpoint that has to do with carpentry more than with computers, with listening to people and places; or, as Johnny Plasma teaches, with a more empathetic way of transforming a habitat, which becomes an opportunity for mutual enrichment. They explain: “Human beings and quality of life are more important than the stylistic signature of a container. The project has a life of its own, which we cannot control. It brings marvelous errors along with it. We have developed a Toolbox containing the things needed to make useful, beautiful and necessary structures in any situation. It has been field tested in extreme conditions, and it can be shipped easily with any kind of transport. You don’t have to study too much before getting to work. But once you get started, you have to be very self-critical, repeating one question like a mantra: what are we doing? Considering the fact that a poll in the UK reports that architects are the least happy with their work, while hairdressers are the most happy, we aim for immediate feedback". That’s what happened in Indonesia, at the Cassia Coop training center for the production of cinnamon in Sungai Penuh, Kerinchi, Sumatra, sponsored by LINK Arkitektur, with a cost of about 30,000 euros, built in just three months (August-November 2011). “It all began with the visit of a French businessman, Patrick Barthelemy, to our studio in Trondheim. He sat down and told us a fascinating story, with a briefcase full of cinnamon. 85% of the world’s cinnamon comes from this zone in Sumatra. We designed nothing on our first trip. We just thought about how to make a hospitable training center that would convey an ethical standard of business management, with local workers and growers compensated in a fair way, and with a program of health care and education. All the ‘factories’ of Cassia Coop have to be safe, healthy and socially sustainable places to work. We won the trust of many people, including young international architecture students, 70 persons in all, who worked with us day after day. We used markers to report on the evolution of the project on a whiteboard, on a daily basis. All the drawings were done afterwards. When it was already built. Almost a paradox. This helped us to include as few details as possible in the design – just the essential things.” Actually the center is a simple box with a sheet-metal roof, brick walls, and casements, doors and window frames in cinnamon wood. At the center, an incisive rectangular ‘hole’ forms a patio, with two fruit trees, since the composition develops and rotates, also symbolically, around two durian trees. Zero-kilometer materials, obtained near the site, and locally crafted furnishings have gone into the concrete making of the work, which conveys the sensation of a successful osmosis with the environment and the spirit of the place. The wood, for example, from nearby cinnamon trees, was transported by eight water buffaloes and cut and assembled on the worksite. The design idea was thus translated into a construction formed by a system of light wooden Y-shaped pillars grafted onto a base of heavy bricks and cement. The main facade has a panoramic view of Mt. Kerinci, the highest volcano in Indonesia, and of the lake, while the back facade looks towards the forest of cinnamon trees. One important challenge was to create a naturally ventilated environment under the large surface of the roof, in an overall layout of 600 m2: five brick volumes with a small workshop at the center, classrooms, offices and a kitchen. The study of the thermal mass, the structure’s capacity to store heat, permitted the designers to achieve dynamic but controlled performance. “Another big challenge,” they say, “was that of standing up to the forces of nature, in a zone subject to frequent earthquakes.” The enclosure has already survived an earthquake of 5 degrees on the Richter scale, meaning that the construction system organized with a truly basic format, even in terms of materials, actually works.