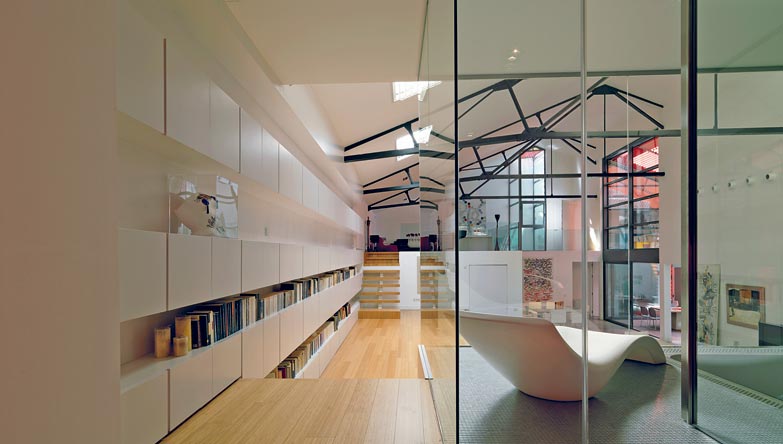 “I have always believed that houses have a soul and that spaces are alive, like people.

I need to inhale a space before thinking of a project, because each space has its own identity.” This opening statement by Teresa Sapey, an Italian designer based in Madrid, sums up the meaning of her project in Bordeaux: the conversion of the 900 square meters of an abandoned mechanical parts workshop to make a sunny Mediterranean loft for the glamorous lifestyle of a young French couple with one daughter. “When I visited the place for the first time,” she recalls, “there was still a strong smell of motor oil and sweat. My steps echoed in a sort of 20th-century cathedral of labor and you could still see Pirelli calendars hung behind the restroom. A masculine space of hard work and power.” She had carte blanche, so with a bit of humor and irony she was able to perform magic: conserving the original layout, thanks to the height of the volumes she has managed to play with disorienting planes of perception, with incisive graphic signs that are also fluid, rigorous and light, inventing a “reversed” planimetric that leads to continuous surprises. In analogous terms, she has dismantled and reassembled ‘the machine for living’ like a compositional collage of mechanical parts. With many pieces made to measure. One arrives from a small entrance, a space with a low ceiling, almost Lilliputian, which extends over a cellar of age-old wines stored in the holes of a white wall, like soap bubbles. The next area is an enormous kitchen conceived as a “laboratory of flavors” that is actually just the prelude – together with the linear extension of the dining area – to an inviting promenade leading to what was the hardest, most industrial volume, now occupied by the pool: a covered belvedere, a new hedonistic skin that humidifies the various spaces organized and connected at different levels. The fitness room, the bath, the closet and the master bedroom, on one side, the side devoted to private life. On the other, the study-library and, at the center, like an enclave aligned with the base of the swimming pool, the continuous and uninterrupted ‘basin’ of the living area, with its islands for welcoming guests: the convivial and public zone, prolonged in the mezzanine which contains a cherry-pink billiards table, as if floating over the space below. The original structure of the enclosure marked by the metal framework of exposed beams and pillars has been intentionally emphasized with a new Taylorist gray color, which meets with dynamic counterpoint in the range of pearly white tones that unfurl on the walls to dynamically reflect the light. “I have broken free of the fear to dare to use color,” Teresa continues, “but I have learned to weigh it, to measure it, in relation to the materials and the light, which is a malleable, ductile material, just like the wood and the cement used for the floors. I felt a need for warm, vivid tones, strong accents. Fields of yellow, orange, saffron, capable of withstanding the peek-a-boo effects produced by the continuous pursuit of visual transparency of surfaces. The lack of windows and of a normal indooroutdoor relationship was evident in these spaces. The main source of natural light was and still is from above, and considering this fact the square outdoor patio becomes a privileged opening for the living area and the two bedrooms, a decisive factor. I like it when a place can offer multiple time frames, variations of notes, opportunities to compose different days, also with light.” Artificial light adds theatrical orchestration thanks to spotlights on the beams, fluorescent crevices and small spots to underline volumes. In a certain sense, as Gae Aulenti did in the Gare d’Orsay in Paris, imagining life inside the station, Teresa Sapey has thought of an architecture inside architecture, creating a small secret garden inside the workshop that becomes a vehicle of spatial depth and new energy. In the ship’s log of the design of the house, which for Teresa Sapey becomes “a false modernity, a contemporary classic, a dramatic, theatrical set, a mixture of tactile pleasure, comfort and functional quality, a beautiful woman ageing with dignity, in keeping with the evolution of her path,” in the end she was the one to be surprised. “The clients told me that they never eat at home. They can’t even boil an egg… What a disappointment, after having designed, inch by inch, a ‘laboratory of flavors’! So I asked them, with a rather shaky voice, if I could write, in block letters on the kitchen furnishings, in bright orange, the message: “je n’aime pas faire la cuisine.”