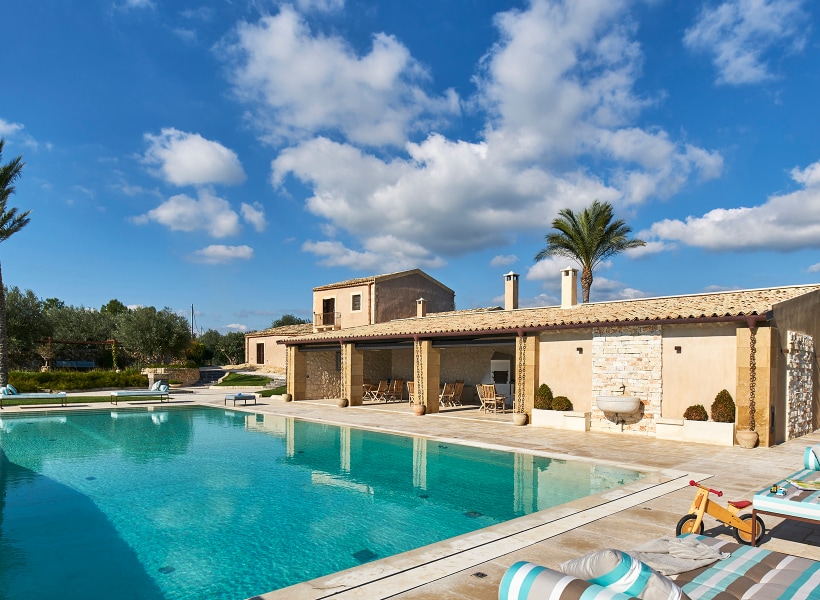 A regular rectangular form with thick stone walls clad in stucco, paced by the orderly rhythm of the openings marked by forceful protruding frames, the house was a building on a single level, subdivided into four large communicating rooms gathered under a pitched roof supported by the wooden pattern of the structural beams.

One of those rural buildings that punctuate the Sicilian countryside, like landmarks in a territory made less arid by agricultural activities. The house, where powerful stone corbels indicated the presence of a balcony and therefore of a related additional living level in the central part, was matched towards the entrance staircase on the southern side by a stone courtyard next to an old stable.

The restoration project for the structure and its outdoor spaces (project by Salvatore Tringali and Rosanna La Rosa architects for Laboratorio Città e Territorio società di ingegneria) has followed the visible traces and the existing layout, proceeding in terms of repairs and reconstructions, expansions and new additions, all within a careful choreography that brings out the value of existing features while harmoniously inserting contemporary materials and figures.

Following the trail of the stone corbels of the vanished balcony, a central volume was reconstructed, which for the entire length of the building made it possible to create a two-story space corresponding to the living area: a visible loft is connected to the ground floor by means of an essential Cor-ten staircase, whose railing is seamlessly connected to that of the suspended space that functions as a bookcase.

The southern facade conserves its original image, facing the stone court and the entrance staircase on an added level. The northern facade has instead received a series of additions in which to organize the service spaces, a guest zone and a winter garden connected to the living room and to a lateral pergola that represents a direct extension of the living area outside, creating shady ventilated spaces that forcefully expand the interiors towards the surrounding countryside, filtered by the new design of the garden with palms and succulents surrounding the house.

In a rhythm set by the light Cor-ten structure and full-height glazings, the new volume is an integral part of the living area, connected to it by means of two tall doors with slender casements of the same material that support continuous panes of glass.

The interior conserves the stone intrados of the original openings, as well as the solid wooden doors they contain; natural stone floors, dark in the living area (pietra pece, a limestone that has absorbed tar) and pale in its glass extension (Modica limestone), spread out on the surface, again connecting the rooms of the house to the outdoor spaces, finding a strong material and domestic rapport.

The existing shelter of the old stall has been restored and extended with the renovation of the roof, as in the rest of the house, made with Sicilian roof tiles. The volume now contains a stone oven and a kitchen, both facing the big new rectangular swimming pool, at the same level as the lateral stone courtyard for which it forms a direct extension thanks to the use of the same stone material applied in all the floor areas (Modica stone).

The infinity pool, made with a continuous slab of glass, faces a grassy slope that like the entrance reaches the walled enclosure of the property: another feature that bears witness to the manmade characteristics and repeated elements of the rural constructions of the Sicilian landscape.