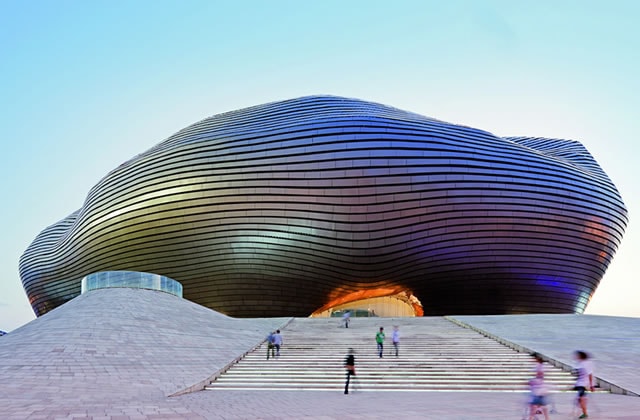 In Ordos, Mongolia, China, the new Museum of Art and the City, by the Chinese studio MAD architects: an off-scale architectural enclosure of great theatrical impact, but much more closely linked to the context that it might seem, at first glance.

They’ve chosen the acronym MAD Architects to sign their works, from the residential towers in Toronto to the traveling pavilion for Vertu, the Floating Earth tray in stainless steel and mahogany for Alessi (a prototype) to the Conrad Hotel in Beijing (now under construction).

But the visionary, theatrical, ironic and international approach seen in the work of this young Chinese studio is closely connected to a pragmatic idea of the power of architecture to transform and modify its surroundings. An approach illustrated by the recent Ordos Museum in Mongolia, a project that began in 2005 that reflects the economic growth of the city and the whole region, and was completed a few months ago. A building that goes beyond the value of an architectural object, focusing on a bigger picture. The ‘chest’, 40 meters in height, with 41,227 sq meters of space, clad by a texture of burnished metal strips, for displays on the local traditions and cultural history of Mongolia, the values and memories of a people, is much more than an amorphous bronze-tone container, a solid interrupted by small openings, avowedly inspired by “the Manhattan Dome of Buckminster Fuller”. In the challenging context of the Gobi Desert, in a zone involved since 2004 in a development masterplan known as “The Ever Rising Sun on the Grassland”, based on rigid orthogonal schemes, the Ordos Museum forcefully takes its place as an authentic landmark, a sculptural figure imagined as a catalyst for a new city. “The design was conceived precisely as a reaction to the city plan”, Ma Yansong, founder of MAD, explains. “It is not an aesthetic machine, nor is it a model for a vertical city. Instead, it is an unexpected, destabilizing presence inside the city center, with which it interacts in counterpoint: it conveys, in its organic physical bulk, like a dune shaped by the wind, our symbolic interpretation of the ever rising sun on the grassland, creating the nucleus of a central square that will permit local culture to encounter the vision of the city of the future”. Certainly this is a decontextualized sign, something that seems to have landed, by chance, bringing an off-scale element with respect to the human figure. But this is precisely why the work is full of connotations and values. It meets the challenge of finding a new contemporary sense of nature, reawakening the pleasure of “staying in touch with the sun and the wind, with new lights and new colors”. The composition of the interiors expresses this concept. The spaces are like extensions of the original outdoor space, under the sheltering roof/dome tribute to Buckminster Fuller. A large glazed opening spreads zenithal light in the rooms, while a series of shiny metal louvers provide sun screening and natural ventilation for the exhibit spaces, activating a policy of energy savings, along with the use of solar panels. The entrance-lobby zone is the ‘calling card’ of the complex overall orchestration: a sinuous promenade that connects the exhibit areas, the auditorium-event space and the offices inside a fluid construction formed by continuous curves that rotate by different degrees on the various levels in enveloping waves, at times interrupted by perforations that seem to have been caused by natural deformations. There are no normal orthogonal corners to accentuate heights. One has the perception of a dense pace of ramps and aerial walkways, offering shifting perspectives, topped by the new panoramic points for viewing the city of Ordos.