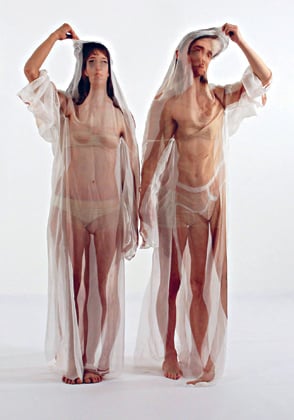 Transparency is taking on a new ‘density’ today, a ‘fullness’ made of data flows and image potential subjected to processes of nucleation and dispersion inside an invisible but highly dynamic plasma.

(In)visible Design was the title of the exhibition organized by Logotel with the expert consulting of Susanna Legrenzi and Stefano Maffei, which during the latest Design Week investigated the invisible through a series of projects in which ‘form’ was handled not as a material limit of things, but as their cognitive edge, exploring the graphics of wind, the materic weave of sound, the biological fabrication of objects and other possible shapings of the bodiless, between science and design. The impact of new technologies on the contemporary sensorial horizon demands that design conduct research on the reformulation of the by now utterly porous borders between aggregates of atoms and clouds of bits, between phenotypes and genotypes of the project. Transparency has become dense, sharpening design sensitivity to the new ‘element’ of the invisible, which opens up today to new possible activations. One telling factor, in this sense, is the increased interest in giving form to the data tides that invade our lives, as in the case of Numbeez, a social network that gives perceptible form to the numbers of our life: miles jogged, pounds lost, the ‘curve’ of love affairs, etc. The projects selected by Legrenzi and Maffei, first of all, propose new cognitive metaphors, ‘differently perceptible’ forms of a reality ribbed by the immaterial, even in its most tangible aspects. Fernanda Viégas and Martin Wattenberg have come up with animated graphics to map the wind. Gabriele Meldaikyte has thought of a way to isolate the gestures made by fingers on touchscreens (tap, scroll, swipe, etc.) to pass them on to future generations. Marc Bretillot and David Edwards have created a way to sip drinks in the form of clouds of scents. Jannis Huelsen, with the Xylinum project, has found a way to exploit the metabolic processes of the bacteria of the same name to fabricate a cellulose fiber that can shape itself to any structure, creating 100% biodegradable objects. “At first glance,” Maffei explains, “it might seem strange that there is practically no furniture in a design exhibition. But to say something meaningful you often have to roam into uncharted territory. Exhibitions like this one are ‘political,’ in the sense that they do not propose new objects, but investigate new paradigms that will be emerging in the years to come.” The timeliness of the theme of invisibility is confirmed by the fact that during the course of Design Week there was also a nonexhibition curated by Alessandro Guerriero, “The Invisible Project,” which invited anyone to describe, in a short video, an object not designed but narrated, ‘not visible’ because it was made of the same substance of which stories are made. The result was a collection of ‘souls’ of objects separated from their bodies, like a ski lift from the Earth to the Moon, or a viewer that shows us, on people’s faces, the features they had when they were children.