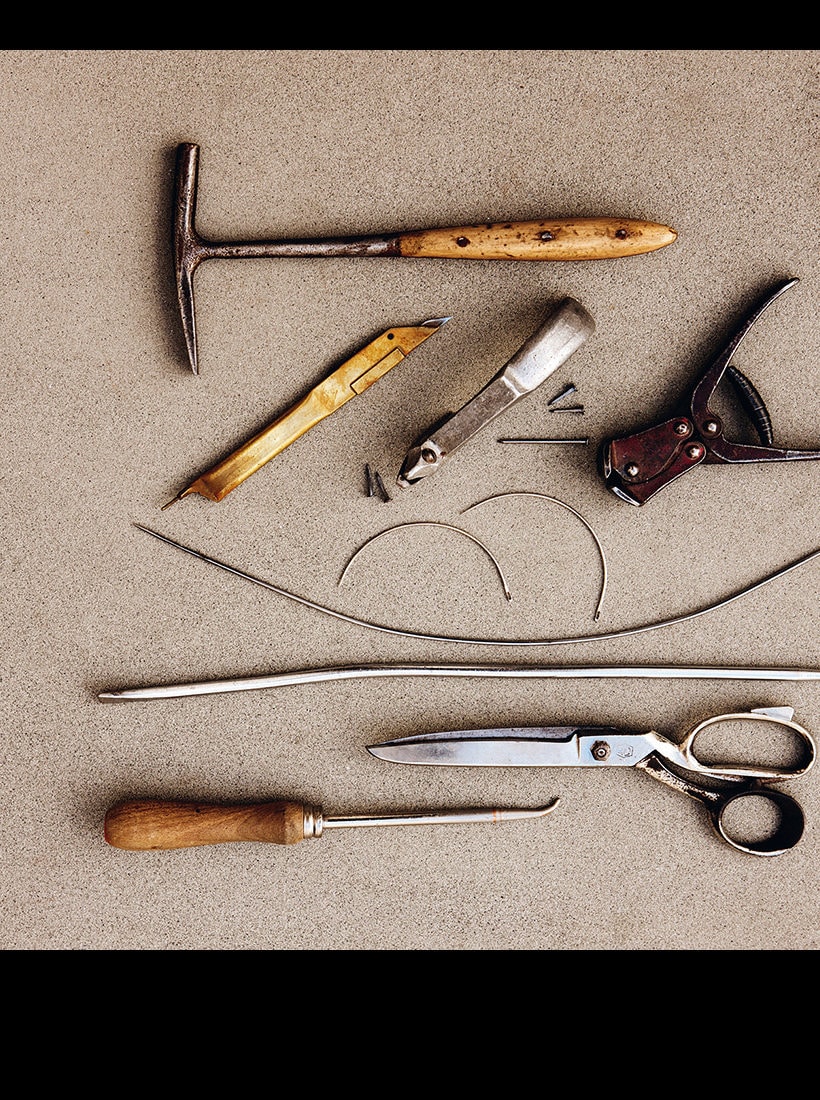 History is no longer enough. Even if it is more than a century, of a true celebrity of italian design like Poltrona Frau. We talked about how the brand is evolving to take its heritage into the world and the future, as a synonym of manufacturing excellence made with leather, with Nicola Coropulis, general director of Poltrona Frau, who explains how the company has put a new mission into focus: from a manufacturer of classic furniture to a producer of overall decor solutions. an indispensable move to meet the challenges of an international market.

Poltrona Frau is very famous in Italy. How is the brand perceived in other countries?
The situation changes, given the fact that until ten years ago Poltrona Frau sold most of its products in Italy. Today its activity focuses on decor solutions with a large margin of personalization, presented all over the world.
Previously Italy accounted for 70% of our residential sales; today foreign markets cover that same percentage. We have seen a trend reversal with constant growth outside of Italy, especially on the Asian markets. Starting last year, China, with 8% of total sales (7 million euros, out of a total of 85 million in the residential sector), has become our biggest export market.

What strategies have you developed to approach international markets?
Over the last few years we have created an upholstered furniture collection that reinterprets seating to respond to international tastes. Alongside the traditional product types (sofas, armchairs, chairs, tables, beds, office furniture), we have inserted cabinets, small tables, complements. This year we also introduced carpets, and next year we will be adding lamps.
So a holistic logic is taking form in the offerings of the brand, relying on its distinctive qualities. We have taken the best of the manufacturing prowess of Poltrona Frau (remember that ever since its founding in 1912 Poltrona Frau has been making leather sofas) and we have enhanced it with the introduction of fabrics, marble, fine cabinet making, new ways of working with leather.

In this new direction, two designers have played a fundamental role: Jean-Marie Massaud and Roberto Lazzeroni. What has been their contribution in terms of image and vision?
Jean-Marie Massaud represents the more international, erudite and exclusive side of Poltrona Frau. Roberto Lazzeroni, on the other hand, brings new energy to the brand’s more traditional aspects. These two designers have guided the development of the brand’s philosophy, creating a series of collections that have independent identities, but also work well if they are mixed together.

The new developments for 2017 included the entry and continuing work of other designers who interpret the identity of Poltrona Frau in different ways. Why have you chosen to work with these names?
They are projects conceived to round out and enhance our overall offerings. Neri & Hu, for example, have designed a series of small objects and complements that bring an ‘oriental touch’ to the collection, a bit of lightness and poetry. The duo Ludovica+Roberto Palomba have developed a modular divan with a clearly contemporary look, called Let it Be, marked by extreme versatility, making it an ideal ‘family room’ product. It comes with a range of accessories to widen its range of functions; and it is available in different sizes, permitting free variation of the configurations. From the Let it Be model comes the Mr Moonlight bed, which reprises the idea of the aluminium bar with the cowhide pad and the large cushions.

One strong piece in the 2017 collection is the Chester Line: an idea developed together with Roberto Lazzeroni, almost just for fun, in an irreverent look at a Poltrona Frau icon, namely the Chester sofa. Could you tell us something about this project?
The Chester has been with Poltrona Frau from the beginning. Renzo Frau, in 1912, decided to produce the classic Edwardian sofa model from England, but he replaced the metal tacks on the front of the armrests with a pleated covering.
This choice allowed him to add a touch of Savoy elegance to a typically English product. Roberto Lazzeroni and I started with the idea of remaking the Chester daybed, which was out of production. Working on it, we discovered that the traditional Chester could be broken down into modules and then reassembled with a different logic, and enhanced with various complementary functions.
In this way an iconic, almost statuary product that forced spaces to revolve around its presence has become an element that can adapt to different needs and environments. A forcefully defined object has become a system.
Some say the Chester has gone to pieces. I reply that we have made it much more versatile and modern, for a product that has 300 years of history and had never been interpreted in quite this way before.

Then there are the new projects with Jean-Marie Massaud…

This year Jean-Marie has given us a lounge chair, the Jay Lounge, invented in terms of the gradual, increasing contamination between workspaces and the home. I believe this piece represents a sort of summary of Massaud’s thinking: the pursuit of rigorous but striking lines, the extreme focus on materials and comfort, the international approach.
The second project by Massaud is the Jane table: sculptural, asymmetric, it rests on three legs and lends itself to a hybrid interpretation, because it can be seen as a dining table or a meeting table.

New items for 2017 also include Cockpit, an operative seat, developed with the Ferrari Design Center, which seems to be a departure from the residential furnishings philosophy of Poltrona Frau…
Actually it expresses our brand’s desire to collaborate with other symbols of Made in Italy, like Ferrari, as well as the challenge of applying our manufacturing skills on an unconventional project. Cockpit comes from Ferrari’s intention to celebrate its 70th anniversary with an important project. Poltrona Frau, since the 1990s, has been the exclusive supplier of leather interiors for Ferrari’s automobiles; the idea of getting us involved in this object came naturally.
The design was done by Ferrari Design Center guided by Flavio Manzoni, based on the idea of transferring the ergonomic lines and concept of racing seats of the latest generation of Ferrari cars into a seat for the home-office. In a racing car the seat is just as important as the other technical parts, and it has to stand up to precise performance criteria.
The challenge was to shift these contents into a product for the home and offices, requiring lengthy efforts on the part of Poltrona Frau technicians, involving technologies they had never used before. For Cockpit, Poltrona Frau has developed a special very advanced mechanism, that concentrates the mechanics of seat adjustment (height and angle) in just 4 cm.
Innovative materials have been used, including carbon fiber and Alutex, a composite material normally used by Ferrari for its cars, and now making its first appearance in the world of furniture. The crafts expertise of our company has also made it possible to create a seat without stitching, with the exception of the external stitching that connects the padding to the shell; this feature has a functional reason for being, but it also becomes a characteristic aesthetic touch. In its essential character, every single detail of Cockpit has been carefully studied, designed and made; even the wheels were designed from scratch.

How important is innovation for a brand like Poltrona Frau?
Our company has always worked on a constant balance between tradition and innovation. Those who visit our plant in Tolentino can see the craftsmen as they fill the Chester by hand with vegetable horsehair, the same that was used 100 years ago, while just 30 meters away, they can see electronic cutting machines for the leather, with function with digital programming.
On the one hand, the artisans who grip hammers to insert the 275 tacks that frame the Vanity Fair, and on the other electronically controlled sewing machines, with programmed selection of stitch modes.
To have the opportunity to work with the world’s greatest architects on important projects like the Walt Disney Concert Hall by Frank Gehry or the Auditorium Parco della Musica by Renzo Piano, and at the same time to collaborate with the most outstanding and demanding automakers or airlines, has undoubtedly driven and refined the technological evolution of Poltrona Frau, its research on new solutions in a business that in any case conserves (and defends) a very clear handmade, artisan component. It is no coincidence that our slogan is “The Intelligence of the Hands” to underline our company’s ability to create objects through the work of craftsmen, where technology becomes an element of support for people and projects. We have added many new experiences to our ancestral know-how, namely that of working with leather