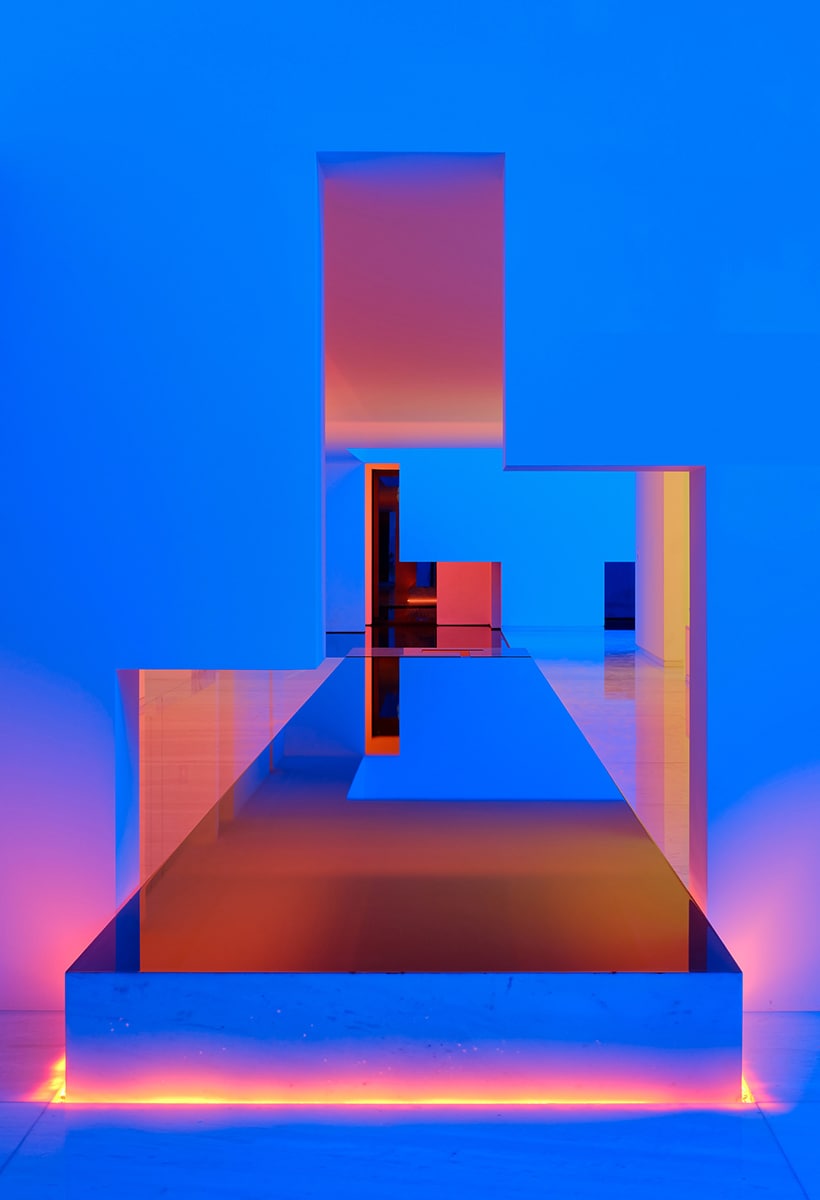 In Mexico City, Bosques de las Lomas, the hôtel particulier (for friends) and the studio of Miguel Ángel and Rafael Aragonés are parts of a system of white rhomboid volumes sculpted by colored light for a striking graphic effect. Next to the family home, which is also part of the complex

"Architectura sine luce nulla architectura est" and the Aragonés, Miguel Ángel (father) and Rafael (son), have made this axiom their mantra in life and work. We already had a chance to grasp this when we published their project for the Mar Adentro hotel at San José del Cabo, in Baja California (Interni 675, October 2017), an immersive site of sensory connection between water, light, air and construction, a full expression of the value taken on by nature in their architectural research.


Miguel Angel Aragonés
°
Miguel Angel Aragonés. His work begins in 1984, only twenty years of age. He initiates in the social housing sector, creating and working in more than a dozen buildings in Mexico City, trying to develop a worthier model, changing the aesthetic poverty of the low-income housing. During his second and third decade as an architect, Aragonés has worked in a number of important and awarded residential projects such as, Casa Castaños, Avellanos, Ombúes, Laureles, Eucaliptos 55 - 65 and 77, Casa Cubos and Casa Tecas, Edificio Arbolada Reforma in Mexico City. His latest projects include “Encanto Hotel” in Acapulco, “Encanto Sky Residences” in Puebla and his latest “Mar Adentro Hotel & Residences” located in San Jose del Cabo, Baja California Sur.

Aware of the influence of the environment on our wellbeing, like curious trans-generational ‘voyagers’ the Aragonés seek every opportunity for exploration-experimentation, in order to learn how to see, understand and adapt to the unknown. Thus their headquarters in Mexico City, in the exclusive green zone of Bosques de las Lomas, also presents an atypical dimension, a far cry from preset schemes: it is the sum of two houses, a residence for friends, and a studio-atelier, an alchemy of private and public spaces interpreted in a sophisticated perspective of socializing, hospitality and work, all at a single location.

Los Rombos, as this distributed home-hub is called, due to the four rhomboid volumes that form the complete and independent parts connected by fluid pathways, is above all an oasis of experiential purification, to share with others. The four ‘grotto-houses’ with their rigorous geometric lines inserted in a very large perimeter set by tall trees and punctuated with regenerating pools of water, embody all the Mexican character of the Aragonés: the unconditional love of light, sought through orientation and in the rhythm of every continuous or interrupted line drawn by the pencil, together with the passion for well-gauged transparency and the incessant dialogue between indoors and outdoors. 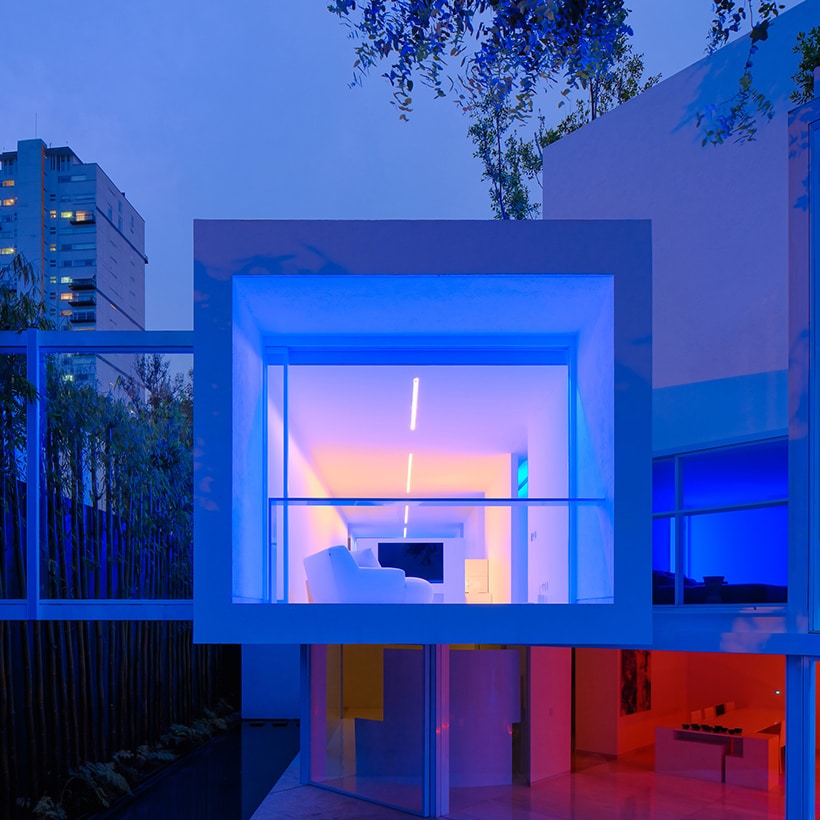 8
The long pool of water that defines the living zones on the ground floor of the volume set aside for guests creates a striking graphic effect in the space thanks to the chromatically adaptable LED lighting and the dynamic rhythm of the white orthogonal walls that frame it.

The key factor of this virtuoso game of interlocks is represented by the large glazings of the internal fronts and the absolute white of the surfaces, that immaculate white that is the sum of all the colors of Luis Barragán and his walls ignited by light, the statement of an active approach to dwelling, capable of influencing the environment so that it, in turn, can influence life.

Rombo IV, the guesthouse shown on these pages (together with Rombo I, the studio-atelier), is the latest to join the set, consolidating it as a more homogenous nucleus, protected and closed towards the street by high, solid walls.

“
We work with a very close-knit group: four people with whom we interact almost 12 hours a day, because we monitor all the aspects of the implementation process of each project, from structural engineering to electronics, technical lighting, furnishings, down to the smallest details."

It was an existing two-story volume which the functional program has expanded to three levels, treated as a box excavated to always offer the perception of the outside in all the rooms, like an innate, intrinsic part of the whole. “This was the most complex part of the overall project,” the designers say, “because the footprint limited the layout, which has been revised with new alignments, geometric intersections, shifts of level, reformulating a formal order and a dimension of inner clarity of every image. The box then seeks to erase the barriers to perception of indoor-outdoor continuity,” they continue, “limiting the thickness of the glass partitions in the essential points of the background, so one does not sense the physical presence in the rhythmical pace of the walls.”

7
The residence developed on three levels, with an effect of dissolving and transformation of the floors thanks to the warm and cool intensities of the technical lighting system, customized by the designers.

The ground level contains the areas for parking, the entrances (main and service), the daytime area (living-dining-kitchen), the entertainment zone (fitness, cinema, billiards); the first floor offers four large suites with services and terraces overlooking the garden, while the upper level is for the solarium and the pool. Like the other volumes, Rombo IV comes from the interpenetration of residential cells in a dynamic geometry sequence of white spaces, open and continuous, sculpted by chromatically adaptable LED lighting with an almost graphic effect, which functions “as an element of transformation, underlining openings and passages with warm and cool intensities.”

At ground level a long reflecting pool acts as an ulterior filter between the inhabited zones, emphasizing the almost mathematical abstraction that reaches its peak in the configuration of the external terraces and patios, conceived as houses inside the house, around complex pools of water and trees that become the protagonists. The variegated silhouettes of the trees convey the solution of this refined design equation: a successful, harmonious dialogue between architecture and nature.

“
The footprint limited the layout, which has been revised with new alignments, geometric intersections, shifts of level, reformulating a formal order and a dimension of inner clarity of every image."

“In Mexico City, as in any lively, populous city, trees represent a precious asset,” the Aragonés say. “They are living organisms, offering atmosphere and shelter, privacy and the sensation of being observed only by the sky, the air, the sun. They spread different aromas, sounds and colors across the cycle of the seasons, filtering the light and capturing it in the colder months, while providing glimpses of solitude, indispensable for introspection. We wanted to shift and reiterate these qualities into architectural form, in the layout of more or less private spaces, grafted like branches onto symbolic trunks, which are the internal stairwells, the cores of each rhombus.”

Rombo I, the design studio of the Aragonés, is organized on three levels as well: the ground floor hosts the reception and two studies; the first is for spaces shared with the team of architects and designers; the second is for the atelier-gallery. 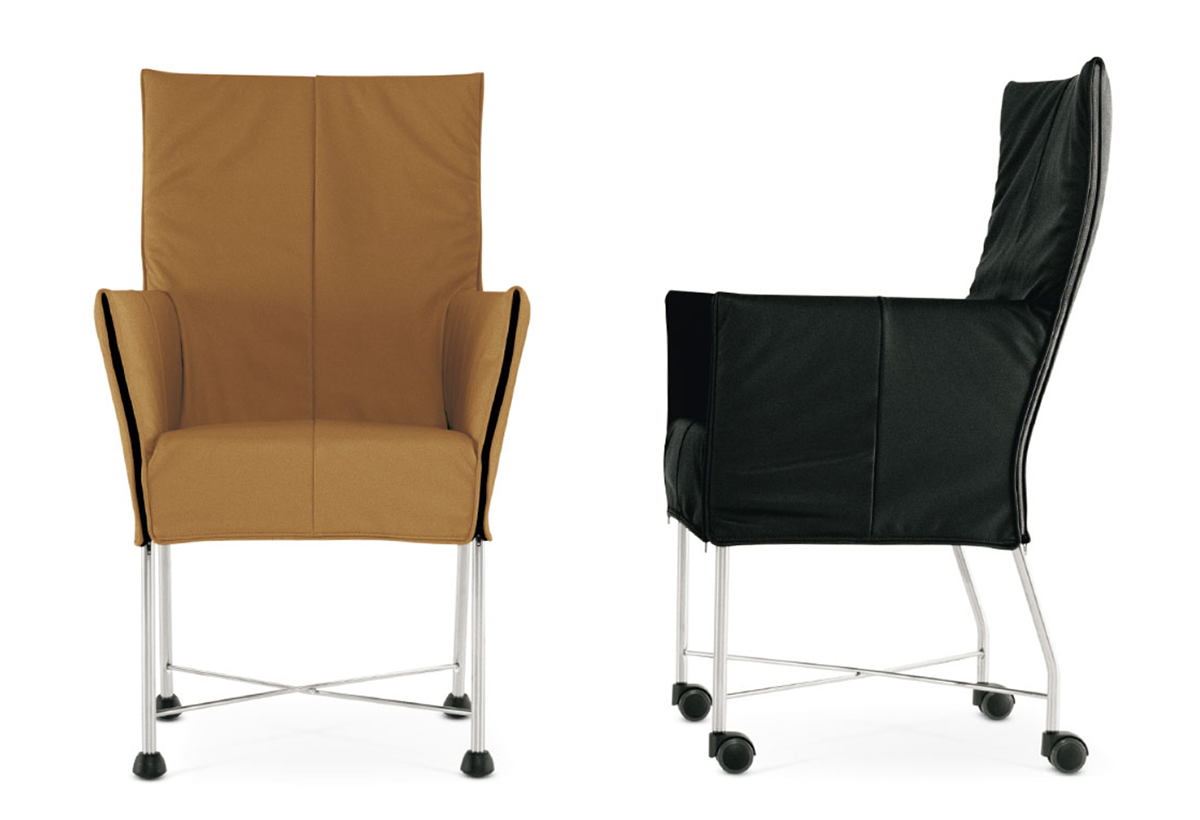 2
In the studio atelier, the Chaplin chair is protagonist, designed by Gerard Van Den Berg for the Dutch company Montis.The upholstery covers the frame like an article of clothing. The cover hangs nonchalantly on the chair and is secured all around with four zips. The chairs are ideally suited for a comfortable eating or discussion area. The version on castors is ideal for use in a work area. Montis has developed an (optional) adjustable back for its chairs by taking advantage of the chairs' flexible upholstery material. The result? A truly elegant reclining lounge chair! A small lever located almost invisibly under the chair is used to shift the back into any position. The appearance of the upholstery remains unchanged as the position of the chair shifts.

“We work with a very close-knit group,” Miguel Ángel says, “four people with whom we interact almost 12 hours a day, because we monitor all the aspects of the implementation process of each project, from structural engineering to electronics, technical lighting, furnishings, down to the smallest details. Each of us has total responsibility in the coordination of one part, also in relation to external suppliers and collaborators. Personally, I don’t think I would be able to coexist with many more people on an everyday basis. With the exception of Ana, my wife, in charge of the overall administration and tutelary deity of Los Rombos.”