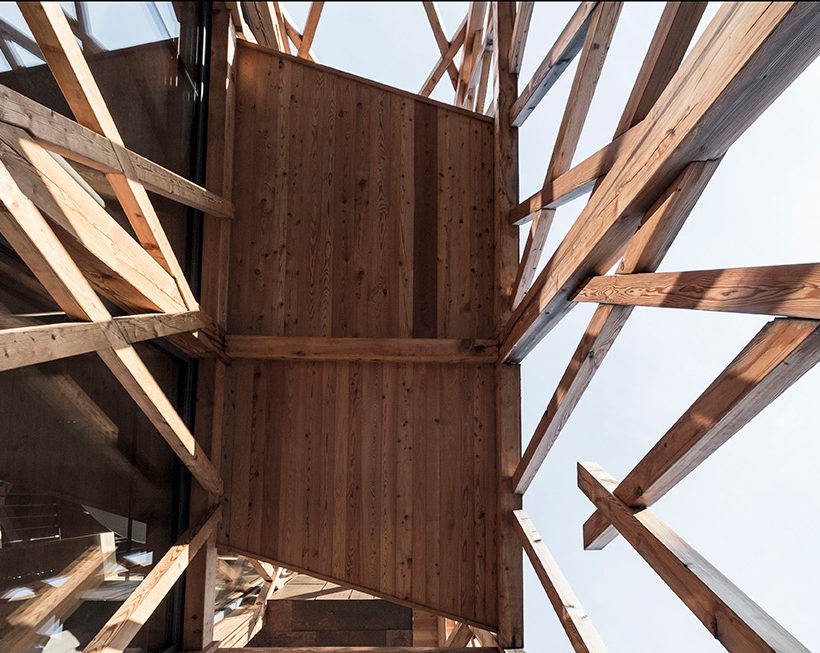 From an Alpine hayloft to an experimental dwelling: below the Sciliar Massif, in the Alpe di Siusi (Bolzano), an old building in stone and wood is reborn. The owner is the architect Stefan Rier, co-founder of the Alto Adige-based studio noa*, who explains the idea. Telling us about the mountains and his childhood memories

“If I think back on the years of my childhood, the best memories are of when I climbed up to the top of the hayloft and jumped down into the fresh hay.” Stefan Rier smiles, remembering bygone days. Since then he has come a long way.

In 2011 in Bolzano, together with Lukas Rungger, he founded Noa*– Network of Architecture, a young and rising Alto Adige-based architecture firm that in 2018 alone has won 18 international prizes. “Two of them – the Best of Interior Award and the Iconic Award for Innovative Architecture – were precisely for this project,” he says, guiding us through his new house: a visionary, unexpected, magical habitat.

This house is also a sort of plunge into the past for you…
I’d say so, yes, also from a professional standpoint: an adventure that began in 2011, precisely with the birth of studio noa*. The construction was part of the oldest nucleus of the town of Siusi: an old wooden hayloft that stood next to the farmhouse, as tradition dictated. The first objective was to avoid disrupting the organization and image of the town. This is why the Messner Haus – from the name of the former owner, which I wanted to conserve – has been clad to be in tune with the tradition: a wooden trellis that wraps each side, just as in the past.

A reference to the tradition, then?
Certainly. For us, keeping ties with tradition is fundamental: it means complete respect for the natural context in which we are building, and deep knowledge of the morphological and aesthetic rules of the villages and the Alpine communities. In this project, for example, we have kept the double pitched roof typical of our towns; we have also replicated the stone base, reflecting the connection to the ground found in the farmsteads of the Alpine pastures; we have recovered the lightness of the structural part in wood, as in the classic mountain barns. But the goal was also to go beyond the tradition.

In what way?
I believe the tradition can go on living only if it is renewed. The confrontation with modernity cannot be mere mediation, a compromise, a collage of different influences. It has to come from a mutual recognition of values and needs. In this way the ‘new’ takes on formal and aesthetic independence that enriches it, making it unique, inimitable.

Does that happen in your house?
Yes, precisely. It is a dwelling in which two spirits coexist and interact. While on the outside the house coincides with that sense of responsibility for the tradition and the historical-environmental context, inside one has maximum compositional freedom, getting away from the classic aesthetic canons of Alpine interiors and becoming an expression of the inhabitants…

A sort of design rebellion?
I have simply played the card of the contemporary, freeing myself of any preset constraints and schemes. To look forward, but also a bit backward…

To your roots?
Yes. While I was designing this house I thought back on the years of my childhood, the happy moments spent amidst these beautiful mountains: from the leaps into the hay to climbing trees to reach secret shelters. I think those memories were behind the internal structure of the house. In particular, the idea of replacing the classic rooms with ‘floating’ boxes hung at different heights and connected by staircases and walkways. It is like a mountain path: as you go up, you gradually leave the more public part of the house behind (kitchen and living area) to reach the more intimate, private zone of the family (bedrooms and bathrooms). And at the top there is a surprise, that rewards you for the whole climb: a marvelous panoramic sauna, hung on the wooden trellis, where only the mountains can spy on you…