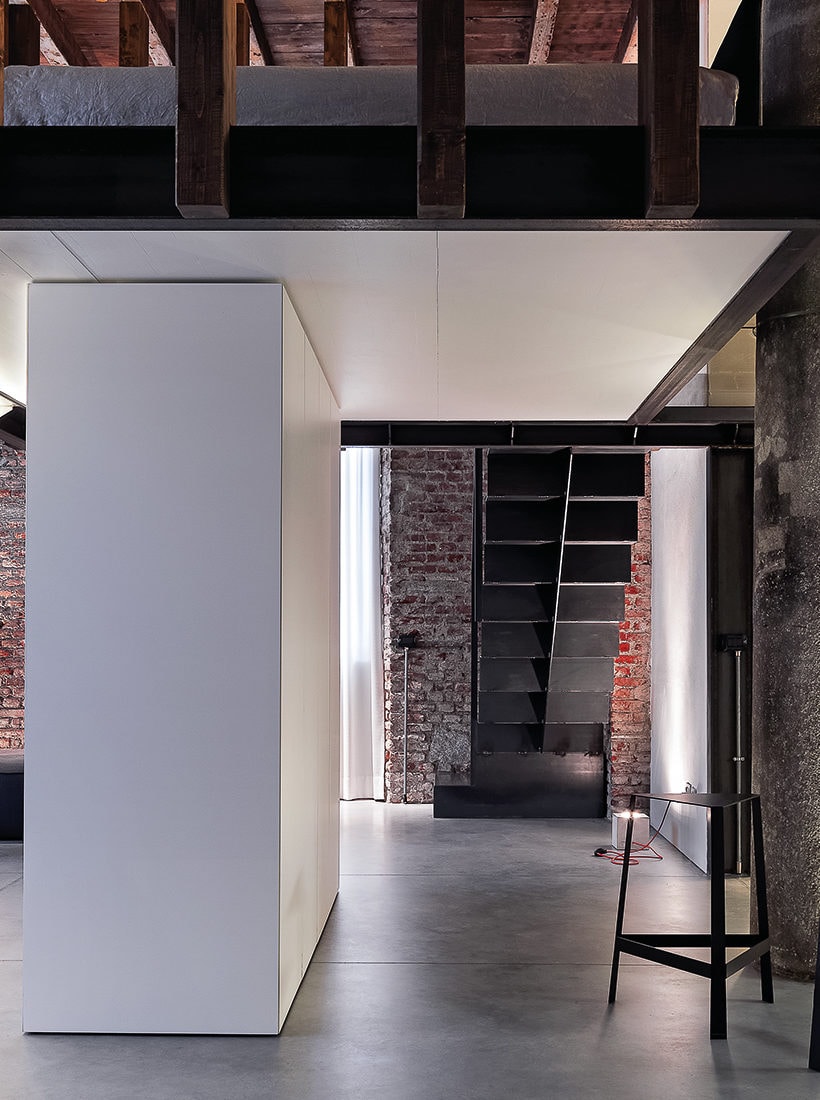 A renovation project in the canal zone of Milan (Navigli), a few meters from a lively nightlife zone.

A curious project, because the client wanted to use a ground floor space previously occupied by crafts workshops to create three residential units of the same size, with the same characteristics, for three children.

In the logic of building on what is already built, the project by Federico Delrosso adapts to these specific needs, creating three lofts of about 100 square meters each, coherently displaying the two approaches – conservative and contemporary – to reinvent a structure with a sequence of large windows on the street, appealing height and access through a secluded, quiet courtyard.

The home shown on these pages is that of Jacopo, but all three residences have the same typology and layout. The height stimulated the designer to imagine a new loft level, independent for each of the three individual houses, but ideally organized as a passage that takes on strong architectural and aesthetic value.

“In the development, after an operation of cleaning and reinforcement of the original enclosure, kept as intact as possible, but with better overall security and ventilation, I focused on the longitudinal axis of the rectangle of about 10 x 30 meters, which is the footprint of the building,” Delrosso explains, “creating a new axial metal structure that independently supports the new loft level, detached from the perimeter masonry and partially closed by vertical beam/struts.

These parts seem like the continuation of the wooden framework of the exposed upper slab, as if the loft level were suspended from it; they actually function to stiffen the upper slab itself, in an illusion effect that becomes the main characteristics of the design, its fulcrum, a sort of spine that organizes spaces and functions.”

Above, the bedroom zone with bathroom is closed in an intimate dimension, underlined by the limited height of the renovated ceiling fitted with new panels and vertical posts in treated laminated wood, as both structural and finished parts.

Below, the living-dining-kitchen-bath areas coexist inside a large unified space, brightened by two enormous windows with renewed thermal break casements and frames. The two levels are connected by a linear staircase in sheet metal: a light figure that does not interrupt the perception of the wooden skin that predominates over the metal, and the rugged image of the exposed red bricks, revitalized by the original perimeter masonry.

The staircase borders on the wall of the bathroom (the only closed space). “It was necessary at this point to find a balancing factor that would indicate, also on a linguistic plane, the different zones of intervention,” Delrosso continues. This is why the only brand new blocks, which contain the bathrooms on the two levels, and the custom fixed furnishings, take on the appearance of essential, neutral volumes, plastered and painted in white.

A pleasant contrast with respect to the floors in cement and resin, and the industrial-grade physical plant elements left visible when they are connected to the existing walls. In the new parts, on the other hand, they are concealed; as in the equipped wall of the kitchen that continues the design of the bathroom. A ‘crude’ aesthetic, and the expressive value of objects.

Also in the logic of respect for the site, on the floor of the loft level near the imposing inherited stone columns (which pace each unit, with one in a central position), Delrosso has inserted cuts of glass that give vertical reach and breadth to the space below, which has a height of just 2.1 meters.

These openings also seek the natural luminosity and fluidity that are a bit compromised in the ground floor area, especially since the building was made for a different purpose.

The narrative is reinforced by the lights of Davide Groppi that redesign the silhouettes, forms and shadows of this domestic stage, a place that is easy to live in, with a dense New York atmosphere in its soft brutalism, without leftover spaces or excess ornamentation.