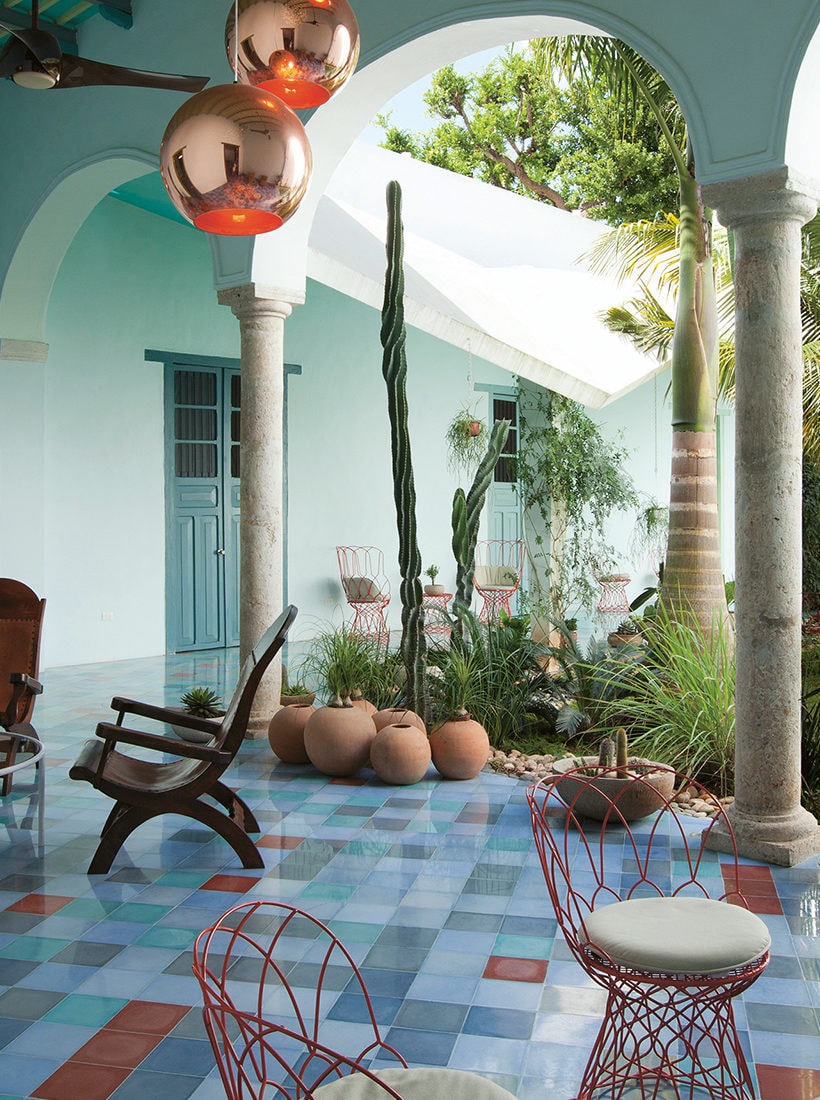 “Mérida is a very prosperous town inhabited by one million people, welcoming people, with a crime rate lower than in Canada; it is situated twenty minutes from Progreso, the largest harbour in Yucatán, and very close to the archaeological sites of Uxmal and Izamal; the ideal place to take long strolls”, confided César and Mima Reyes, who chose it as their buen retiro, that is, their retreat when they can leave San Juan, in Puerto Rico, where they live and work.

“It is quite easy for us to reach Mérida, since by plane it is three hours and a half far from San Juan”, continued César who is a professional psychiatrist (while Mima is a cuisine enthusiast) and who collects contemporary artworks for the love of it (with a preference for those by Chris Ofili, Peter Doig and Elizabeth Peyton). Maybe this is why he established a very fruitful and harmonic relationship with Jorge Pardo, an artist of Cuban origin based in Los Angeles, with a studio also in Merida, well-known for his visionary site-specific installations strongly connoted for their materials and colours.

“We met in 1997, for a project on sculptures in Munich. We have immediately recognized our mutual Caribbean roots and our shared love for good wine and food. Hence the idea of an architectural project in Puerto Rico. A few years later Pardo invited us to Mérida, where he has been living for three years, to see how he worked at Hacienda Tecoh near Izamal.

We fell in love with Mérida and we asked Pardo to refurbish for us a colonial house we had recently bought. I would have liked to entrust the project to a colour architect who could imagine a 3D minimalist canvas as container. But Jorge had an incredible spatial intelligence and in Mérida too the driving force of the composition was the pattern of materials and colours that interact with space and tell you how to move.

I am convinced that Jorge uses the colour palette as a means to make observers closer to art and spur them to get in touch with its complexity. In each of his projects it is his indefinite linguistic cross-over dimension that gives strength to the story he tells. He considers himself a sculptor, but design and architecture are disciplines closely related to his art”.

As a designer Jorge Pardo respected and maintained the original spirit of the home: a typical Spanish colonial structure of the 19th century, consisting of large rooms with very high ceilings that open up one after another and develop around inner patios and gardens, with waves of urban jungle foliage returned to  the historical centre.

He paid attention to their cracked and graceful elegance enhanced by a natural breeze that caresses the rooms, but he also gave them a warm atmosphere: with the appealing pixel colours of the floor in hand-painted tone-on-tone cement tiles in computer-generated shades and in the round-shaped tiles lining the swimming-pool, the celadon blue and aqua green doors and ceilings and the luminous yellows with silver flashes that can be found along the path between public and private areas, down to the guest room: “the Annex, the new portion of the house developed together with architects Mecky Reuss and Ana Paula Ruiz Galindo, which intentionally seems to be pre-existing”.

A contemporary twist, made of perceptions, lights and shadows as well as locally produced materials. They are the main features of the fully-equipped kitchen, the room where Mima reigns, with elements that have been tailor-made with pinpoint accuracy.

“Conviviality is at the heart of our choices in Merida”, recognized César Reyes. “We spend most of our time in the dining-room / kitchen area, that opens on the swimming-pool. Jorge designed the table while the olive green chairs are the model Masters by Philippe Starck, the copper suspended lamps are by Tom Dixon, the beloved red chairs, as well as the chrome-plated iron table, are by Patricia Urquiola.

Modern design pieces have been purchased in Mexico City and combined with ethnic pieces of furniture coming from local antique stores. Like the seats in the modernist Eamses style and the box-spring four-poster bed, an original Chinese piece. This is the house we love to live in and this is the Mexico we have in our hearts, filled with strong Caribbean and French cultural influences”.

Open on the swimming-pool, the patio is a generous space of relaxation. Heterogeneous furnishings: copper suspended lamps by Tom Dixon and chairs Re-Trouvé by Patricia Urquiola for Emu.
The dining area is near the inner swimming-pool. The floor, in hand-painted cement tiles in computer generated shades and locally manufactured, reflects the colours of doors and ceilings. Design by Jorge Pardo. The chairs are the model Masters by Philippe Starck with Eugeni Quitllet manufactured by Kartell.
The entrance hall is organized around a heterogeneous range of products: from the table of the collection Re-Trouvé by Patricia Urquiola for Emu to the wooden box-spring four-posted bed which is a original Chinese model, purchased locally.
Outdoor view of the house situated in the historical centre of Mérida.
The kitchen.
A bathroom.
The guest room: the graphic patterns of the floor, that stress the transit from one room to another as if they were chromatic carpets, also characterize the tops of tailor-made furnishing elements.
The guest room.
#Design #Projects