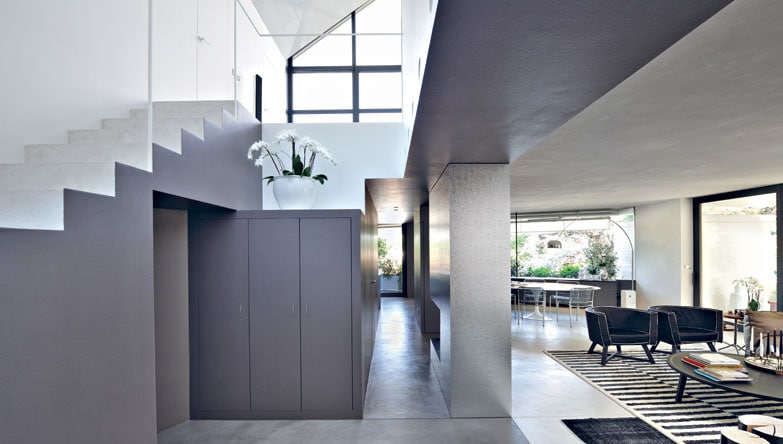 “The first meeting with Michele and Arianna Gervasoni was a lucky break.

It came by word of mouth. I had done an apartment at the Golf Club of Lignano, including furnishings from the Inout collection by Gervasoni. The technicians who did the job, in their report, praised this work as fresh, new and precise. This made Mrs. Gervasoni curious, so she contacted me and asked for a CD of my constructed works. We then met a few months later, and the adventure of the house began” says Alessio Princic, the architect behind the restructuring of this home: a duplex of 170 m2, with large terraces on both levels, ample and luminous, located in a small family property (separate units are the homes of the parents and siblings) in Udine, surrounded by greenery but not too far from the center of town. “We thought in the initial phase,” says Arianna and Michele “to assign the job to the architect and designer Paola Navone, art director of Gervasoni. Later, in agreement with her, we opted to assign the project to an architect from Udine who could supervise the work more closely and would be familiar with local suppliers”. The choice went to Alessio Princic, who “Slovenian in Italy and Italian in Slovenia” as he calls himself, once an apprentice in his father’s furniture factory, trained at the University of Ljubljana and then with Federico Marconi (a student of Alvar Aalto) and Gino Valle in Udine, now a freelance professional and teacher at the University of Architecture of Maribor, was able to freely apply his own personal interpretation of the themes of light and materials, used as vibrant tactile textures. “I had complete liberty. The only request of the clients, especially of Michele, was not to create the atmosphere of a showroom in the house. So I selected only the essential, fundamental items from the collections of the Gervasoni catalogue, and played with the suggestions of a creative materic approach, in a two-tone, white and dark gray enclosure, intentionally purified and subdued in its tones, to bring out the idea of a relaxing, flexible nest, open to friends”. A tailor-made, public and private raiment. In compositional terms, the goal of achieving maximum spatial openness in the living area and the construction of a ‘nest within a nest’ on the upper level, containing the bedroom zone, uses the staircase volume, the access node between the two levels, as “a geometric and monolithic cut”, while the load-bearing pillar wrapped by the sophisticated partition containing the fireplace forms the other guideline for orientation of every internal path, in a series of glimpses and views of the outside world, filtered by large brushed Douglas fir casements, stained in gray. This ‘emotional planning’ then proceeded in a long, painstaking work of craftsmanship, done with an already tried and tested team of carpenters, blacksmiths and painters. “Just consider the fact” the architect says “that for the floors made in resin mixed with natural pigments, we had to make over twenty samples to achieve the desired effect for the white. The same tone, everywhere, but waterproof in the baths, and crystallized in the other spaces.” Arianna Gervasoni personally supervised all the choices of fabrics, from the special collections of Pierre Frey and Jim Thompson. The luminous enclosure has been emphasized, on the upper level, by the decoration of the ceiling with sheets of glazed lava made for the Inout tables by Gervasoni, forming a surface with forceful irregularities, seemingly weightless, mutable during the different hours of the day, an extraordinary puzzle of lights and shadows. All the walls, as well as the fixed furnishings, and the ‘sky’ of the entrance area, have been covered in a fiberglass weave, for a durable surface then colored with particular elastic paint that remains soft to the touch over time. The same texturized material has been used for the sliding wooden surfaces, which partially or entirely open and close to meet different needs, in the kitchen and the bedroom zone; like dynamic thresholds, they are “a sign of the project, but also a game in the great veil that encloses the ‘house within a house’ of the bedroom”. The flexible usefulness of the rooms and furnishings has been another significant parameter of reference, Princic continues, “so much so that even the minimal divan-daybeds – custom pieces – that fill the part of the living area set aside for watching TV, have been equipped with handy wheels”. A nomadic accent that goes with the reinterpretation, in a metropolitan key, of memories of India, and the warm reflections of textures of beaten aluminium plated with silver, covering the partition with the fireplace. The kitchen, seen as an ideal extension of the living-dining area, has instead been made with galvanized sheet metal, a material that oxidizes and changes in time; in its long tradition, it “covered the counters and tables in cafes, but even today it is often used in Parisian interiors, because even when it gets old it never loses its modest but eternal identity.” Stainless steel tops, a central island and vanishing doors… the kitchen of the house invites discovery, to seek its noble core, lined with walnut, or the ready-made detail of handles that are simply “bicycle cables converted for a new use”. Iron is also used for the top of the fixed cabinets that run below the windows, in a mixture of black iron and dark stained wood. The sum of all these details generates the precious force of this project, based on tailor-made care and innovative materic deployment of every single element. The same characteristics found in the outstanding design projects of Gervasoni.