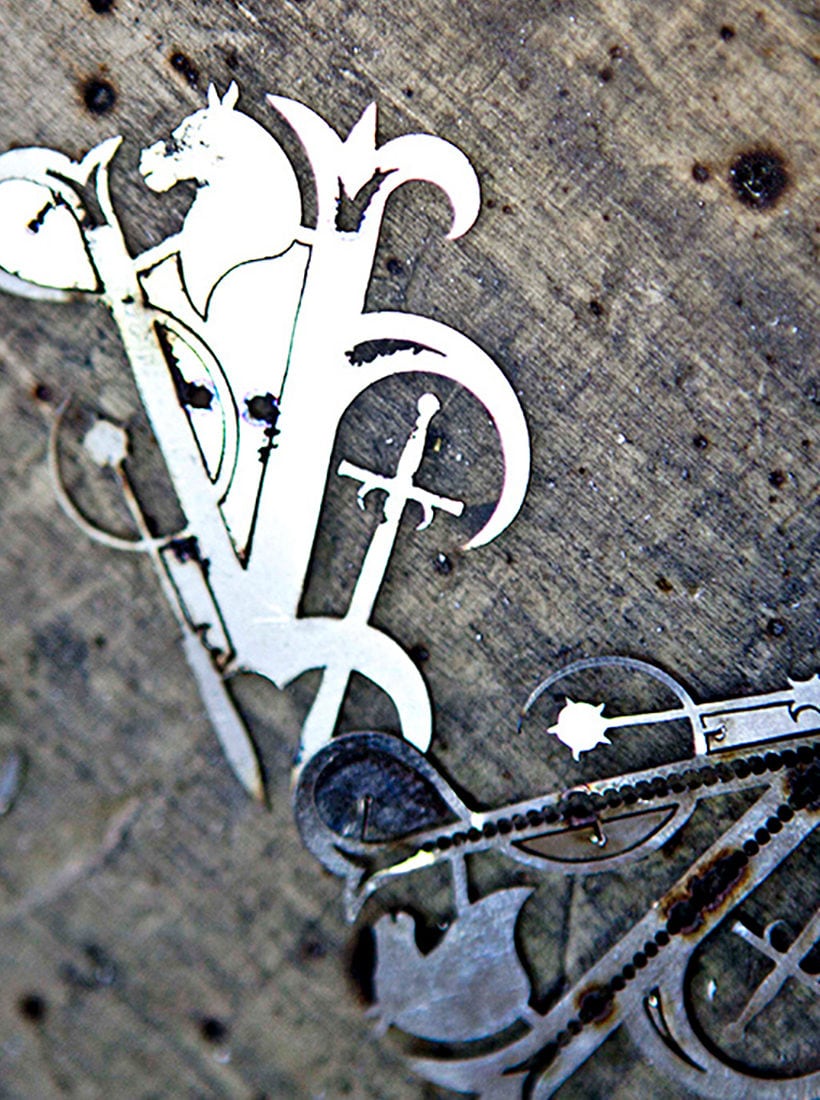 The new sense of luxury

The new sense of luxury

An utterly italian story, connecting Ipe, the historic producer of upholstered furnishings founded in Bologna in 1959, and Visionnaire, the brand created in 2005 that now offers high-end interior design solutions in over 55 countries.

A story made of intuition and creativity, typical of made in Italy, seen as the tools with which to bring intrinsic quality to products, making them part of an evocative plot.

Eleonore Cavalli, from the third generation of the founding family, creative director of the brand, explains how this history has led to an eclectic range of offerings, covering all categories of domestic design: from architectural space to the smallest decor touches.

“Visionnaire focuses on luxury, and that is precisely why its expertise has to cover multiple levels: if clients turn to us it is because they know they can find a unique range of proposals, that doesn’t exist elsewhere on the market. We offer custom solutions: particular settings, spaces that interpret the dreams and aspirations of our clients and remain unique, created only for them. This concept of luxury makes Visionnaire a brand that is increasingly coveted all over the world.”

Since its founding in 2005 Visionnaire has focused on a very particular idea of interior design, outside the usual established schemes. How did the idea come about?
The history of Visionnaire has roots in the history of IPE, a company founded in 1959 by my grandfather with the idea of experimenting with alternative applications for the polyurethane sheets based on a Pirelli patent. The first intuition was to use the patent to revolutionize the production of automobile seats, in particular those of the high-end models of Lancia.
The passage to the home furnishings sector happened later, first with the innovative application of polyurethane on transformable seating for outdoor and then also indoor use. In both cases these were products with a high level of technical content.
This meant that from the beginning Germany became the primary market, permitting IPE to immediately take on an international character that has marked its activities in the decades to follow. With the arrival of the third generation – my brother Leopold and I – at the end of the 1990s, the Visionnaire project was born. The market, in the meantime, had changed drastically: it was dominated by big retailers, and increasingly saturated.
The idea was to create a brand that would aim for the highest market segment. We could count on great technical know-how; for us, it was natural to focus on in-depth research on materials and detailing, extending over time to all types of furnishings, and all the components of domestic architecture.

Today the Visionnaire range is the result of a global project that goes beyond furniture. What are its ingredients?
Our work is always closely linked to that of architects, because in most cases it has to do not only with movable furniture, but also with fixed furnishings. Visionnaire is a company that proposes a lifestyle in an interior context.
Nevertheless, our know-how permits us to delve straight into projects from the outset, even taking part in the definition of the concept of the house itself. We have an in-house staff of designers ready to solve problems of residential architecture on all scales: from the layout of the rooms to the definition of the outdoor landscape, all the way to the organization of the facades.
This has allowed us, for example, to handle the entire renovation of a large castle in Krakow that was in a state of complete abandon. The project took three years, and we played a part on every design level.

In terms of product, what are the brand’s strategic and stylistic choices?
Craftsmanship and direct reference to Italy (in both production and styling) are the values immediately applied by Visionnaire to stand out on the market. The variety of our product range is also a key factor. In 2010 we made our debut in the kitchen; then came the diversification into outdoor furnishings and the wellness area.
With a catalogue of over 3000 articles, we can say we have a truly global offering. We have decided to focus on products with high technical content and a very characteristic language at the same time. Italian history has always been the inspiration for our collections.
At times we have drawn on the history of Italian art, but we have also been inspired by cinema, literature, the visual arts in general.
We have worked with designers with the goal of narrating – often in an ironic or surreal way – the moments, episodes and significant themes of these different creative ambits, translating them and interpreting them in a typical Visionnaire language.

The 2017 collection of Visionnaire reflects a ‘greenery revolution.’ What does that mean?
Though we have always worked on large spaces – even 20,000 square meters, for several villas in the Arab Emirates – greenery had always been outside the boundaries of our residential projects. For the Salone del Mobile 2017 we decided to propose a new idea of the home equipped with a green ‘lung’ that could become the fulcrum of the spatial organization.
We are experimenting with this concept for a villa in Siberia, in a very special landscape context: the place is covered with snow for almost the whole year, and with its ‘primordial’ character one can hardly distinguish between the colors of the ground and those of the sky.
To attenuate this sense of disorientation, emphasized by the large windows of the villa, we have created a green area at the center of the house, around the staircase connecting the levels, accentuating its theatrical presence.

From 2005 to the present, has the concept of luxury proposed by Visionnaire changed?
We have always believed in a wider notion of comfort and relaxation. This is why we decided this year to focus on greenery, as a positive, regenerating factor, joined by a new collection of furnishings with low environmental impact.
The aim is to promote a new idea of luxury that no longer coincides with precious objects, but with an environment that makes us feel good. This is no random choice: the needs and tastes of international markets are changing fast, and the idea of luxury itself is evolving. We have always been very careful to intercept the signals and requests of our clients, with whom we have a close bond, a relationship of esteem and loyalty that has lasted for years.
For many of our clients we have made more than one house, in very different geographical contexts, for various members of the family with very different needs. This has helped us to understand how the communities of ‘big spenders’ interact in the various territories of the world, when they are outside of their normal contexts.
Today we know, for example, what a Frenchman in Doha might want, as opposed to what a Russian desires in France. The new generations definitely have the ability to recognize the intrinsic quality of products. They are capable of perceiving the coherence between brand and content, and they are more sensitive to the values of originality. This has stimulated us to embody recognizable values in our creations.

Visionnaire addresses foreign markets, but the production is entirely done in Italy. What are the reasons behind this choice?
It is a choice our clients definitely seem to appreciate. The workshops with which we operate are scattered all over the Italian territory: we have 250 working platforms, from Friuli to Apulia. We are proud that we have contributed to the growth and formation of many production and crafts districts. We have chosen, from the start, to put human beings at the center of our activity, and we have kept faith with this principle, even when everyone else was moving production elsewhere. Our numbers prove that it is possible to work in Italy, and to do it well.

You will be on hand for the second Chinese edition of Salone del mobile.Milano, in Shanghai from 23 to 25 November 2017. What does China represent for Visionnaire today?
With sales that will be over 11 million euros this year, China has become our second largest market, after the Russian-speaking clientele. In terms of retailing, China is in first place, thanks to a capillary distribution network that relies on 15 points of sale, including 9 monobrand showrooms. Over the last ten years the Chinese market has changed a lot, thanks to a population that travels more often in Italy and Europe, and has deeply altered its taste parameters. China, furthermore, is going through an important moment of rediscovery of its own roots and traditions.
This stimulates the Chinese to express themselves with greater freedom and at the same time to approach other countries that have a rich cultural tradition. First of all comes Italy, of course.

In 2015 you began to work with Steve Leung, a true starchitect in China. What did that mean for Visionnaire?
The collaboration with Steve Leung comes from a long friendship. We have known him for a long time, because he always came to our booths at the Salone del Mobile and other fairs. Our interaction is also the result of his background in European culture, since his hometown is Hong Kong.
His approach to design and the working of materials is very close to ours, though it reflects an Asian perspective; this allows him to interpret the Visionnaire project in a personal way that is also consistent with the themes we propose, adding an even more international spirit. His 2017 collection is based on the theme of Greenery and a contemporary idea of luxury also imagined for a younger clientele.
It stands out for the use of natural materials like stone and wood, interpreted with essential lines and great attention to detail.

Visionnaire products are all Made in Italy by skilled craftsmen selected across the national territory.
The Rosemary chair designed by Alessandro La Spada.
The Babylon sofa inspired by the work of Piet Mondrian, both designed by Alessandro La Spada.
Greenery is the theme of the 2017 collection, which proposes a large green area as the core of the home. In this living area, the Babylon sofa and the Rosemary armchairs are combined with the Stinger table (foreground), designed by Alessandro La Spada, with grosgrain base in wood or leather and overhanging top.
The Opera table by Alessandro La Spada, with crafted grosgrain wood base and wooden top with owl-beak shaped border and flush-mounted Lazy Susan mechanism. Here it is seen with the Carmen Steel chair and the Augustus cabinet, enhanced by the exclusive work “Ruster” by Michele Astolfi.
A sketch to illustrate Greenery, the new idea of domestic luxury proposed by Visionnaire.
The Princess bed designed by Steve Leung, with leather covering for the feet and sommier, and fabric for the oval headboard; the latter is enhanced by large pleats in the central part.
The Rhea armchair with solid wood structure, entirely covered in leather, designed by Giuseppe Viganò.
Designed by Steve Leung, Grace is an armchair with double upholstery, structure in solid poplar and plywood; the back is in leather or fabric, while the lower portion is quilted inside and out. By the same designer, the Kenaz table with aluminium structure and top in natural agate.
#Design #Projects