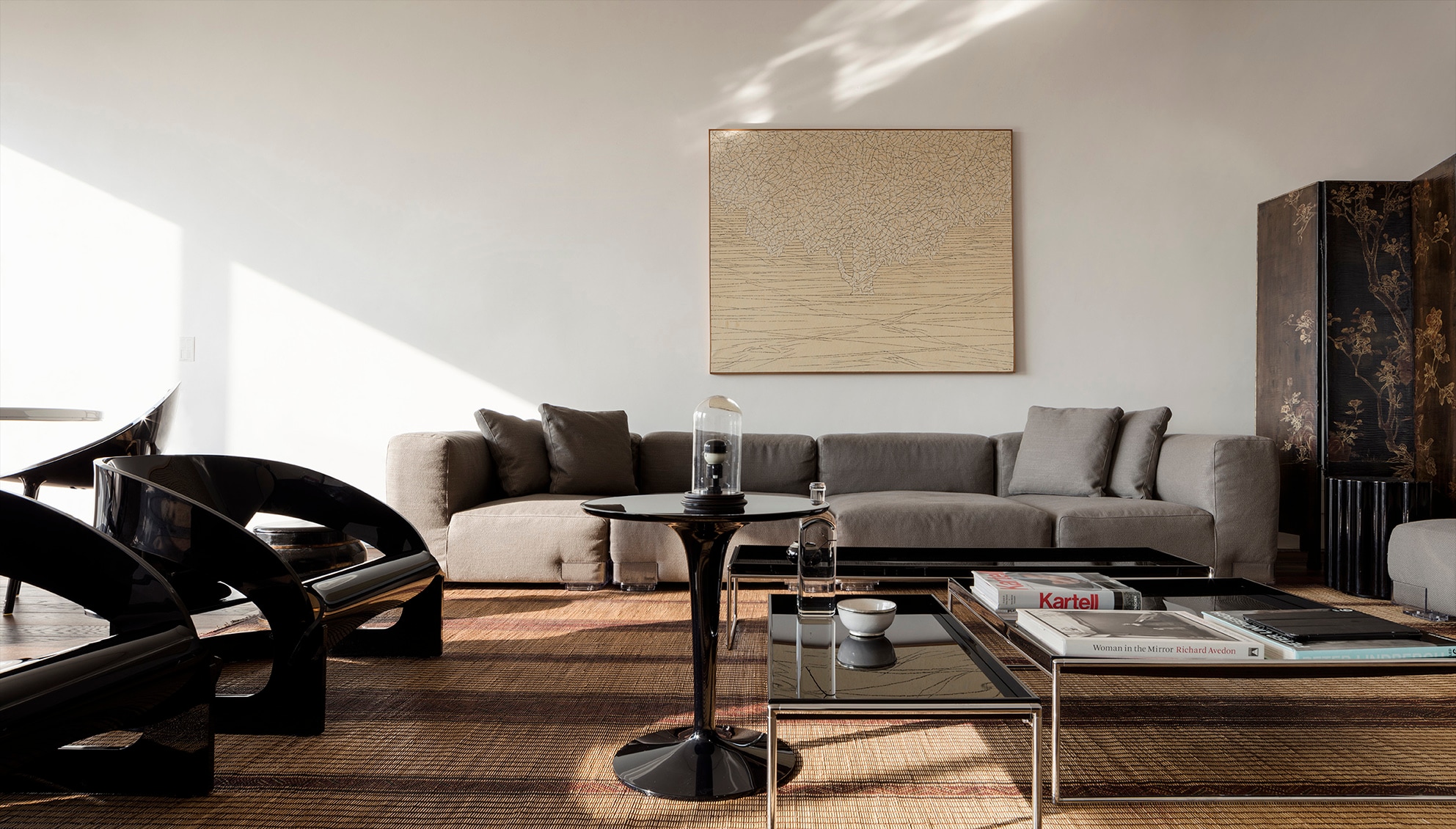 The pleasure of mixing

The pleasure of mixing

Milan: an apartment of large spaces and lots of light, on the upper level of an apartment building from the 1950s in the Porta Romana zone, at the edge of the historic Giardino d’Arcadia; on a single level, topped by a large balcony-loggia; interiors recently renovated by Lissoni Associati, an outstanding name on the international design scene. This text, so far, might be a classified ad on the real estate pages.

But what makes this high-profile residence unique is its history, the history of a family. “It was the home of my maternal grandparents, and that makes it very special,”, says Federico Luti, sales director of Kartell (Europe, China and Japan), who with his sister Lorenza constitutes the third generation in the company founded in 1949 by Giulio Castelli and Anna Castelli Ferrieri – where since 1988 his father Claudio has been at the helm. The firm is a pioneer in the production of objects and design furnishings in plastic, famous all over the world.

The island where the globetrotting manager returns from his voyages is inside a building constructed in 1949-1954 based on a design by Ignazio Gardella with Anna Castelli Ferrieri, along with Roberto Menghi.

The apartment house is one of the best examples of Milanese architecture from that period, far from the coldness of orthodox functionalism, with a green approach that was ahead of its time: wanted to save an age-old tree in the garden, so one branch was brought into a balcony, modifying the standard profile of the one above it, to avoid cutting the tree.

“With the help of Piero Lissoni, a close friend of our family, and one of the designers of reference for Kartell, we have transformed the rooms where my grandparents lived with their two children,” Federico Luti continues, “without upsetting the skeleton of Gardella’s design, but making it more contemporary and better suited to my needs.”

The needs of a young man of the 21st century who thrives on the new nature and timing of the third industrial revolution, and wanted a clear separation between the more social and open zones (organized around the sofa or the dining table) and the private areas for relaxation and study.

Thus the Milanese path to the domestic landscape of Gardella has been interpreted by Piero Lissoni with the spirit of the present, while conserving echoes of the great premises of modernity: from the idea of the primary enclosure as a dynamic machine à habiter to the aesthetic idea of lightness, subtraction, Milanese reserve.

“A job that required nearly Japanese precision, in the rigorous interpenetration of the parts,” Lissoni remarks. “We have focused on the most striking element, namely the large full-height window facing the garden, salvaging the original handles and casements in metal (just made imperceptibly smaller, for reasons of energy efficiency), maintaining direct visual contact between it and the living-dining area, reconfigured as a large open space, marked by the contrast between the pale walls with marmorino finish and the dark floors in thermo-treated oak.

The bedroom also opens, as in the original house, to the green foliage of the trees. The passages between the spaces have been redefined with a central spine made of white wardrobes, conceived as architectural features, for fluid pacing of the space and the necessary division between the night and day area.

Obviously the spaces of the kitchen and bathrooms – the latter equipped with all the comforts of a spa for personal wellness – have been radically transformed.” The furnishings, on the other hand, are the result of the choices of Federico Luti, based on his experiences in life, not just on the job. How do the furnishings fit into Lissoni’s linguistic transcription of the spaces?

“With the pleasure of mixing things, without preset schemes or strict vocabularies, establishing a relationship with the history of the place,” Luti says. “I don’t like the idea of a house like a showroom, though with a company like Kartell it comes almost naturally to test the products of the various designers in everyday life, to try out the different styles, with natural colors and bright accents. I have put these things together with other pieces, classic or contemporary, and antiques, like the late 1940s table by Paolo Buffa in walnut and brass, and the cabinet by Maurice Dufrêne from the late 1930s, in rosewood with ebonized wood borders.

And there are pieces of affection, like my grandparents’ bookcase in metal and wood, designed by Ignazio Gardella, restored in the studio, or the large white oval table from the 1970s by Kartell, adapted for the living area. I realize that the presences from the family brand, in their pluralism, are a leitmotif in all the spaces, but there is ongoing contamination with other things, a state of becoming to fit the mood of the moment. This is why I am in no hurry to finish the house.”

Given the fact that Kartell has production 100% Made in Italy, the Milanese-Italian character of this domestic interior, in the end, becomes the projection of an idea that develops precisely by rethinking our multiple roots.

The entrance to the apartment, which was the home of the maternal grandparents of Federico, Giulio Castelli and Anna Castelli Ferrieri, the founders of Kartell, the family firm, in 1949.
Overall view of the living area, a large, luminous open space.
Portrait of Federico Luti (photo Tommaso Gesuato) with the Masters seat designed by Philippe Starck and produced by Kartell. Winner of the Red Dot Design Award in 2013.
La zona pranzo, orientata verso la grande finestra a tutta altezza sul giardino, con i serramenti originali ristrutturati. Tavolo ovale bianco anni Settanta, sedute nere Louis Ghost e Mr. Impossible di Philippe Starck, vaso U Shine di Eugeni Quitllet, lampadario Neutra di Ferruccio Laviani, sgabello rosso Pilastro di Ettore Sottsass. Contrappunti dinamici, le due sedie Chiavarina e un vaso Venini. Sulla consolle giapponese, autoritratto di Gabriele Basilico.
The dining zone faces the large full-height window on the garden, with the original casements restored. White oval table from the 1970s, black Louis Ghost and Mr. Impossible chairs by Philippe Starck, U Shine vase by Eugeni Quitllet, Neutra lamp by Ferruccio Laviani, red Pilastro stool by Ettore Sottsass. Dynamic counterpoint is provided by the two Chiavarina chairs and a vase by Venini. On the Japanese console, self-portrait of Gabriele Basilico.
View of the radically redesigned kitchen space: white custom cabinets, LT kitchen by Piero Lissoni for Boffi, Charles Ghost stools by Philippe Starck and glasses from the Jellies Family line by Patricia Urquiola, all by Kartell.
View of the main bathroom, with the lightness of surfaces in glass and natural stone. Iceland tub by Piero Lissoni for Boffi, Ghost Buster console by Philippe Starck, Kartell Fragrances candles, Pilastro by Ettore Sottsass, all produced by Kartell.
View from the studio toward the entrance zone. Note the wardrobes that also connect to the doors, marking the fluid passages between the spaces. In the foreground, the grandparents’ bookcase, designed by Ignazio Gardella and now restored.
The very private corner with the desk, framed by the photos of regattas on the walls. Cindy lamp and Four table by Ferruccio Laviani, all by Kartell.
#Design #Projects