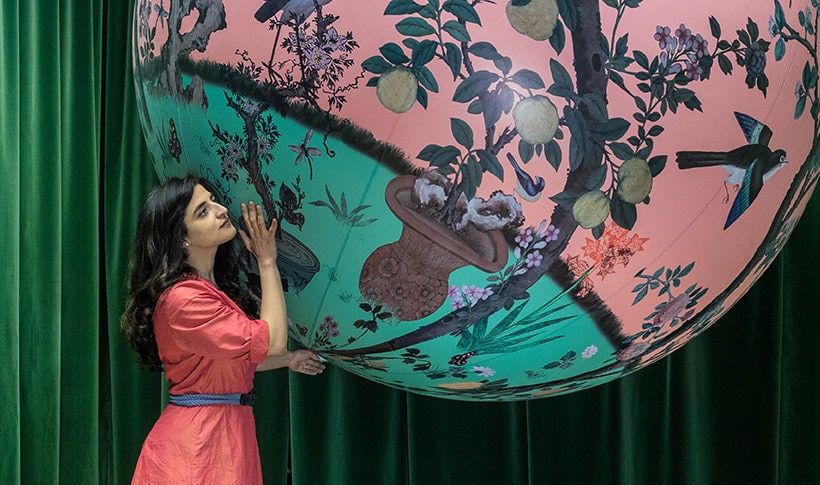 The power of stories

#Milano
The power of stories

With a talent for communication, Sara Ricciardi has grasped the best potentialities of the new media to talk about herself. And to define a different way of doing design, where images and words join forces to create narratives and to activate energies. For both collectibles and social projects

Looking at Sara Ricciardi’s Instagram profile – that of a 29-year-old designer from Campania now getting ample coverage in design magazines – you wonder how her activity as a creator of images, as sophisticated as the work of an expert, can coexist with her job as a teacher of social design at the Naba academy in Milan. If you meet her in person it all becomes clear: her force – and the secret of her success – lies precisely in a great, innate capacity to communicate, to create empathy and free up energy. This also happens when she uses digital media. We asked her to tell us about her calling as a ‘millennial designer,’ which prompts her to work on suburbs, earthquake-damaged cities, kids, psychiatric patients, while at the same time designing conceptual objects for collectors. Always with the same idea: that of ‘designing stories.’

“I went to classical high school, and I was always attracted to the conceptual, philosophical aspects. The manual approach came later, at NABA. Narration is the basis of all my work. I think that all of us, in our activities, have to first find an identity and then put it into what we do. This is why I am interested in design as a vehicle of communication.”

You are very active in the social media, and your communication happens through an original mixture of images and words. What is your approach to these media that have granted you great visibility?
For me the social media are above all a tool of personal storytelling, a very important way to reach others (though not the only way). They are a tool, however, that has to be approached and study carefully. I like to use it to create a relationship of complicity with the audience. My images always go with texts that describe exactly what they are, my thoughts, my suggestions of the moment. And this generates a very active reaction, almost unexpected. Without true content the communication wouldn’t work.

Your texts are always full of suggestions, and are presented with a rhythm and quality of synthesis that make them resemble a poetic composition rather than a project description. How much study lies behind these thoughts?
Actually they are the result of a very immediate physical and mental process: an image takes form and for me it comes naturally to capture it with words. Since childhood I have kept a diary, where I always write. I write and then I draw. I write much more than I draw, to be honest. Through the texts on the social networks I simply transfer and share my personal brainstorming, without really knowing where it will lead.

Does your inspiration start with images or words?
Always with words. Before reaching the images with which I narrate my projects, I always develop a concept, a story, which I then share and discuss with the photographers with whom I work. I always need time to arrive at a shot, because I like to study the balance of empty and full parts, and the other elements that are the aesthetic expression of mental disciplines. This also happens when I take the pictures myself.

Without Instagram, would Sara Ricciardi be the person she is today?
I think Instagram has been a great facilitator and accelerator for my career. But without this tool I would definitely have invented other dynamics to reach people. I remember one of my first projects at the university. I had built a machine, a sort of wooden cart, with which I went around Milan, weaving and making knitted swings.
I used a megaphone, I stopped passers-by, to create direct contact with people. The more I walked the more I produced, given the fact that the speed of the circular loom was connected to that of the wheels of the cart. To document this performance I made photographs and shot videos; there was no Instagram back then, but the Internet already offered the possibility of sharing content and telling stories.
I started to do that right away, opening a website during my second year at the university, precisely because I felt the need to introduce myself. I worked on theater for many years, and it taught me that it is important to be open to others, to convey something of yourself to the people around you. And Instagram, like all social media, is simply one of the possible tools with which that communication can happen.

What projects are you working on right now?
In January, during Pitti Uomo in Florence, there will be an installation I created for Luisa Via Roma in relation to the brand Attico. The idea is to create a sort of Eden, a space of wellbeing and pleasure: a garden of delights, equipped with feathered machinery.
I am also making a collection of furnishings for Houtique, a Valencia-based brand that offers objects made exclusively by local artisans; the language is different from that of industrial production, but the costs remain affordable. I went to Valencia where they introduced me to a craftsman who makes large caricature sculptures in polystyrene, which are displayed and then burned during the Las Falls festival, which is very important for the local residents. I was able to study the particular colorings used for these artistic sculptures, which I decided to reinterpret, making a sort of caricature of classic living rooms. The collection will be presented in Milan during Design Week in April, like the installation I am creating for Serge Ferrari.
I just finished an exhibition at the Swing Gallery in Benevento, my hometown, for which I made a series of pieces focusing on that region. Unlike other cities in Campania, which are very open, Benevento is more introverted and mysterious; it is a city of witches and its history is full of rituals and an esoteric spirit. This is why I thought about things that could become ‘rhythmical’ in a sabbath, almost suggesting a magical beauty, of wisdom, a bit drowsy in a way. For example, there is a lamp with an obsidian sphere – the material of self-awareness – which if you take it and move it activates the light and, as a result, a dance of roots on the basis of a specially composed piece of music. I like to work on all the senses: sight, touch, hearing, smell. The collection has been made by artisans from Benevento. For the Cavalli Longobardi, a series of benches, I made use of the traditional pottery techniques of San Lorenzello, and the technique of black iron. Each piece takes on a different floral theme, on a decorative level, and on a formal level that of the column and the capital, making reference to the ruins of antiquity, which the buildings of Benevento have gradually incorporated inside their walls, to prevent pillage.

From social design to art galleries: how can these two dimensions coexist in your work?
One feeds the other, actually: caring for objects leads me to apply the same care on a social level. In a certain sense the materials have taught me to reason with people.

What does the term research mean to you?
I am fond of a phrase of Albert Einstein, who said “if we knew what we were doing, it wouldn’t be called research.” For me it means experimenting, wondering, taking risks. Doing social design, I have learned that it is not so important to create something new, as to change the approach to what we already have. So research does not mean necessarily making new things, but developing new stories applied to reality, and to do it in such a way that people feel affection for them.