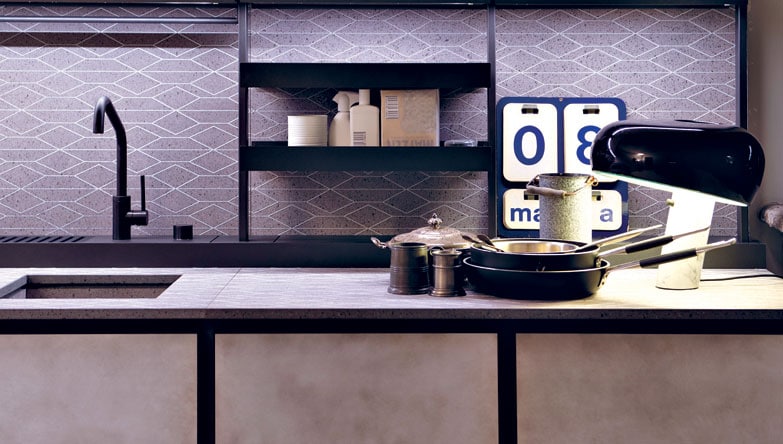 “It’s called Salinas, my place of memory par excellence: the name of a long beach in the Asturias, on the ocean, where my grandfather had a house.

The men would come back loaded with fish and put it on the table, and the women would cook it. For me it is a Proustian place, my personal madeleine.” Salinas is also the name chosen by Patricia Urquiola for her first kitchen, designed for Boffi. “It is a very innovative system for Boffi’s production, since they have always focused on coffer-type models that can be made to measure. Instead, Salinas is a frame system, with a structure in matte black metal tubing, with a series of modules for combinations to generate compositions for the bases, as islands, against the wall, or peninsulas, of different sizes and with all the functions needed for use.” The kitchen comes with a structure in two heights (suspended or on the ground, to contain appliances under the counter), and the doors are made with aluminium frames fitted with light panels, with a thickness of 4/6 mm, in different colors and materials, including Paperstone, woods, metal with zinc, brass or copper finish, industrial glass, vibrated aluminium, lacquer and textured cement. The washing zone is in natural stone, while the counters come in matte ceramic, marble, stone or Sicilian lava decorated with geometric designs. “For the tops we thought about using tiles, but that would have slowed the production process, because an installer would be needed. So we shifted to ceramic sheets (which can be longer than three meters) whose modular design echoes that of tiles, or as an alternative we chose Sicilian lava, decorated with very basic designs. Another part of the kitchen I like is a solid wood board, fixed or extractable, on which you can cook and eat. A table that adds a material plus to a kitchen I have imagined as having tactile, concrete, real surfaces.” The Salinas project also has a built-in central channel that is hidden in the structure but represents, according to Roberto Gavazzi, CEO of Boffi, “the element that gives it technical credibility, a container that guarantees functional solidity, routing the plumbing and electrical system, permitting insertion of the faucet, ensuring drainage and exhaust functions.” “Salinas,” Urquiola continues, “is a flexible design, with which it is possible to make a monomateric and monochromatic kitchen, or to create a configuration by freely combining all the available materials and colors.” “Patricia’s system is like a package,” Gavazzi explains, “in which you take parts and put them together, as in a construction game. It is a collection that has taken our company onto a different and very interesting path. Boffi has always been (and always will be) a brand that works on customizing, on a product made as much to measure as possible. Salinas stands out for its extremely modular design, allowing the consumer to do the personalization, leading to a process of simplification that does not imply any loss of functional quality. The kitchen can be put together very quickly (dealers save the time usually put into technical drawings); it can be ordered and produced very rapidly, which helps to cut production costs. Working with Patricia has been very stimulating. She represents a different world from ours, a world of energy, passion, instinct, which has swept over a rigorous, essential, ‘masculine’ company like ours. She has brought feminine content, contaminating our approach. But we’ve also contaminated her approach a bit.” “It’s true,” Urquiola concludes, “I too have ‘given in’ on certain design solutions. For example, I wanted to present a configuration of very limited size, but then I thought about the needs of a catalogue like that of Boffi, and I understood they had to be respected. When I work with a company I like to develop a relationship of empathy, so I try not to impose my vision, but to make it match the identity of the brand. Nevertheless, Salinas is a project in progress (for next year we are already planning to add a system of closets), so it may still be possible to also create a smaller version.”