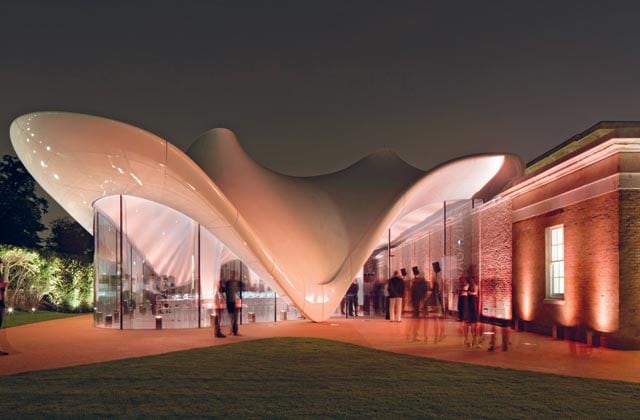 In 2000 she designed the temporary pavilion of the Serpentine Gallery, that successful partnership of art and architecture.

Thirteen years later comes the next step, quite nearby: the permanent structure of the Serpentine Gallery, opened in September and named the Sackler Gallery – in a tribute to Dr. Mortimer and Dame Theresa Sackler, whose large donation made the construction of the Kensington Gardens possible in London. This is the second major art space created by Zaha Hadid and Patrik Schumacher, after the MAXXI in Rome (2006-2010). 900 square meters that have hosted, for the first shows, the work of the young Argentine sculptor Adrián Villar Rojas, in the UK for the first time, and a retrospective by the Italian artist Marisa Merz, who received the prize for the career at the Venice Biennale 2013. The integration of a new high-tech tensile structure with a classic brick building from the 19th century – a former gunpowder storage facility of the army, known as The Magazine and long abandoned – translates into an extension that avoids competing with the existing historical presence, restructured and converted for its new functions, opting instead for a convincing compositional graft. The outstanding feature of the project is precisely the sinuous fiberglass roof, supported by five slim pillars, like an active textile membrane, stretched, plucked and attached to the neoclassical building from 1805. In spite of the intentionally light, transparent touch of this nomadic structure, this technological veil unites the two epochs of the project: in its completeness, the pavilion seems like an organic growth of the original volume, rising and lowering to touch the ground in three distinct points. Its sculptural geometric figure dilates the boundaries, beyond the engineering designed by the Arup Studio. Beyond the undulated glass wall that allows natural light to enter in a modulated way. Beyond the western outer wall of the former magazine, which has become an integral part of the new, without losing its recognizable identity. In the open space inside, a pale place of organic fluidity, the only fixed and invariable elements remain the island kitchen and the bar counter along the brick wall of the historic building, left visible. What is hidden, instead, is the complex structure of the roof, formed by three layers: the external membrane in spray-painted fiberglass, sturdy and durable; the intermediate composite of insulation and flameproofing; and the lower layer in white technical fabric, stretched inside the continuous steel ring covered with shaped fiberglass that marks the perimeter, and the internal columns that set the architectural pace with their five luminous rings. The old magazine rediscovers the qualities of its original spaces, interpreted in keeping with the simple, clear gallery model offered by the Glyptothek (Munich, 1815) of Leo von Klenze. The two vaulted brick spaces, surrounded by a square structure with a frontal entrance colonnade, have been restored in size and continuity, removing dividers and creating a lateral zone for offices and services. The lighting, developed with the consulting of Arnold Chan, Isometrix Lighting + Design, plays the role of a discreet, silent companion to the spaces, also in dialogue with the openings for natural light made in the new roof of the courtyard, with single-layer waterproof membranes interrupted by adjustable steel sunscreen blades.